My 2015 knitting goals were: to have 5 third-party publication acceptances, including one out of Interweave Knits, Pompom Quarterly, and/or Twist Collective; to self-publish 20 patterns; and to have 5 patterns as part of the Knit Picks Independent Designers' Program.

I made some goals, missed others. I'm really proud to say that I had 12 third-party acceptances in 2015, including one out of my specific three publishers.

I made my self-publishing goal when I was still completely self-employed, so I'm giving myself a pass on not making that one, because it's a lot harder to knit all the time when you have to go to work. I self-published 12 patterns. That's not bad at all.

I have three patterns in the Knit Picks program, with a fourth one just about done. That's close enough to five, right?

Here's a recap of everything I published this year. The third-party pubs are in roughly chronological order. The self-pubs are in whatever order the photos fit together. 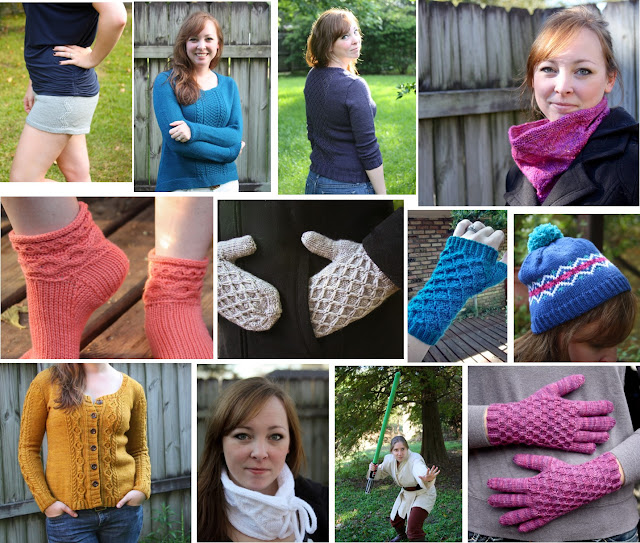 Here's hoping for an even more successful, productive 2016, filled with lots of knitting! Happy New Year everyone!

(Also, as a thank-you for making this a great year, all patterns in my Ravelry shop are 30% off with coupon code "Hello2016" from now until midnight on January 1.)
Posted by Emily Ringelman at 12:12 PM