My younger sister is pregnant. She's due in late September, but my mom and I have already dove right in to making baby stuff. She's way more on top of it than me, but she's also just a more prolific sewer, and knitting is generally slower, and excuses. But. 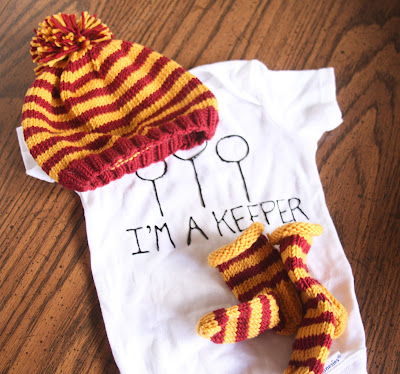 We're pretty big Harry Potter enthusiasts in this family. Some may go so far as to say Harry Potter nerds. I disagree. We're not nerds. Just slightly obsessive. My brother is lobbying pretty hard to get the baby named Dumbledore, a name that he claims, despite social norms and whatever my sister may think, is in fact a unisex name. I thought maybe for a second middle name. I bet my sister will agree to that. Right Katy? Right? 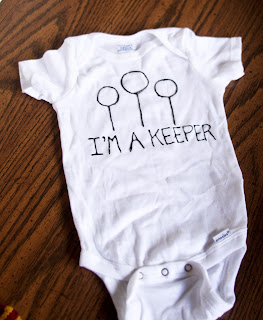 So I made the baby this little Harry Potter set. I saw a onesie like this on Pinterest, but it was a pin of a pin of a pin, and impossible to track down. I dislike that about Pinterest. It used to be so easy to find the original source, but then they switched some things up, and now- impossible. This is why I try to pin only original material, with the source name in my description. Give credit where it's due, right? But I digress. The onesie. Couldn't find the source, so I just made one myself. I tried to find small black iron-on letters at JoAnn's, but no luck. I figured that my handwriting is pretty good, so I would just wing it with some black puff-paint. It's ok. Not perfect. I don't think the baby will mind much, though. The hat and socks I made in Gryffindor colors, because Harry Potter. And I think that most people are pretty sure they'd be in Gryffindor, despite the fact that most people would most certainly not be in Gryffindor. Me, for example. I think most people would actually be Hufflepuffs. Hufflepuff House would be like 85% of the school. 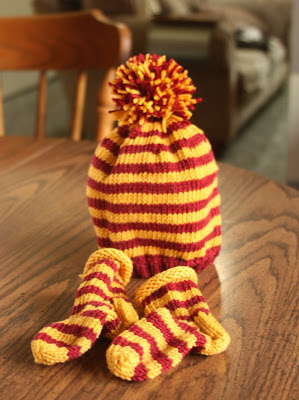 The hat and socks are made from Plymouth Superwash DK, which is a wonderful yarn to knit with. So soft, and the colors are dead on. I ordered yarn from KnitPicks for this project, and it was hotdog stand yellow and red. Wrong. So I tried again, and I won. The hat I just knitted. It's just a hat. Easy. Tied a pompom on top because everything is improved with a pompom. The socks are from Last Minute Knitted Gifts, which is a lovely book. I've made a few things from that book already, and intend to make a few more. Knitted baskets, for example. I love the idea of storing my knitting projects in a knitted basket. Very meta. 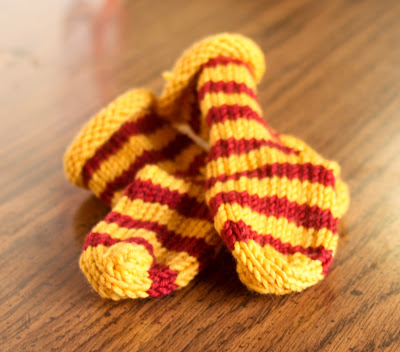 So I hope she likes this little collection. She loves Harry Potter nearly as much as me, so I'm sure she will. Once this kid's born it's totally getting a Weasley sweater. And maybe a sweater with a Hungarian Horntail on it, which I would have to be careful to never show my brother, because he would demand one as well, and I just don't have that kind of time. There's baby stuff to knit. 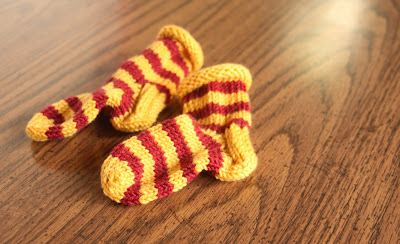 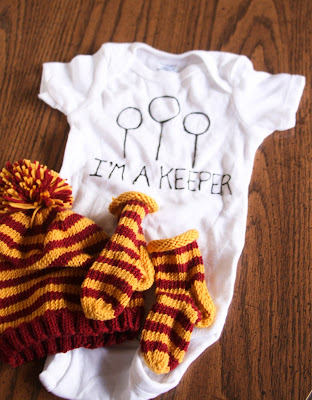 Posted by Emily Ringelman at 3:09 PM No comments:

Today has been "made random stuff" day. I made this art piece to fill a blank space in my hallway that's needed something there for much longer than I care to admit. 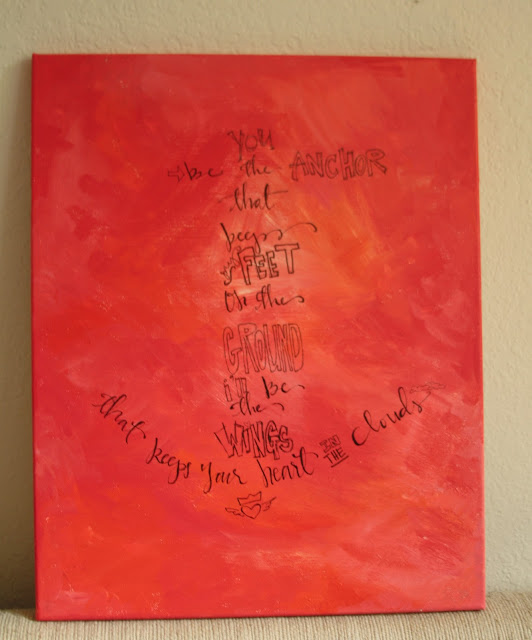 A little hard to photograph, but hopefully you get the picture. It's something I saw on Pinterest... and then did no further research. No idea where the quote is from. But it says: You be the anchor that keeps my feet on the ground, I'll be the wings that keep your heart in the clouds. 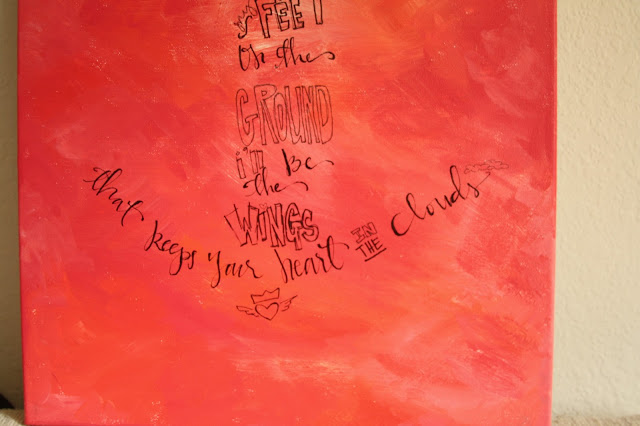 Closer view. I painted a canvas with a few different colors of coral paint, then I used a couple of felt-tip pens to do the lettering. I wish I'd drawn out the shape of the anchor first, because it's a little wonky, but what do you do. It's anchor-esque.

I also made this boxy zipper pouch for traveling knitting projects. I have a couple little bags for that purpose already, but I find myself moving projects in and out of them pretty often. Figured it's probably best to just have more. 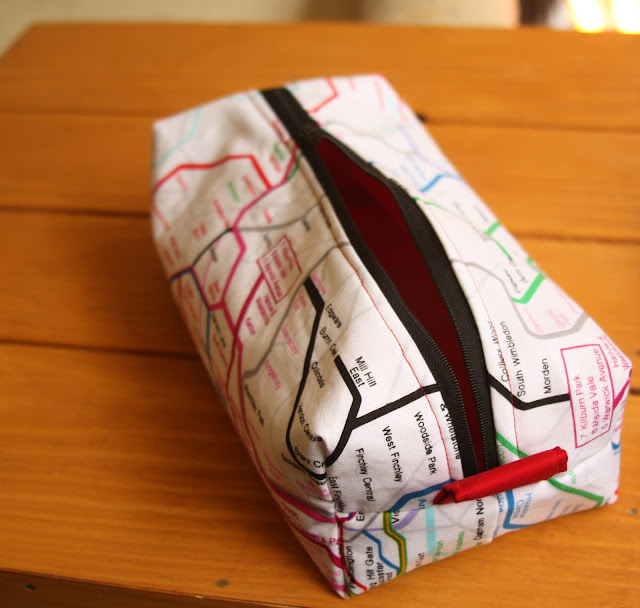 I got this fabric from Fabric Bubb on Etsy. It's a British subway map. I thought it was too random and funny to pass up. And it's super colorful, and I love color. Clearly. Somewhere on here is "King's Cross Station", which the Harry Potter nerd in me went nuts over. Don't think it ended up in a place of prominence, but it's at least there somewhere. 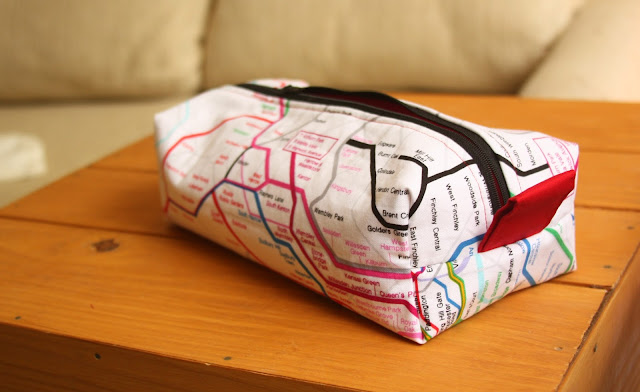 I just Googled "boxy zipper bag tutorial" and cobbled together what I found to make this. It's fully lined, which I really like. I wish it was taller. But now I know for next time. I also got some blue to green ombre chevron fabric to make another bag, so I'll make that one taller. Then my knitting projects will each get their own bag, and I won't end up at work with the yarn for one project, needles for another, no pattern, and three pairs of tiny scissors. That's just annoying.

Posted by Emily Ringelman at 2:52 PM No comments:

I realize how very far behind I am on this, but. Here's what I got at Stitches West. 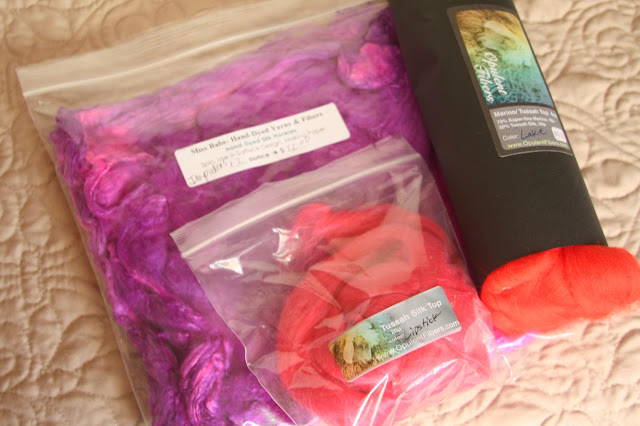 I'm not a huge spinner, but I love squishing fiber. The orange-y one is a gorgeous merino-silk blend from Opulent Fibers. The coral Tussah silk is also from that booth. I think I stood in that booth for an awkwardly long time. All of the colors were gorgeous and saturated, and I could not choose. I think that when I picked those two, in my head I was going to blend them or something, but now I don't know. I will most likely just look at them for like 3 years before I do anything with them. 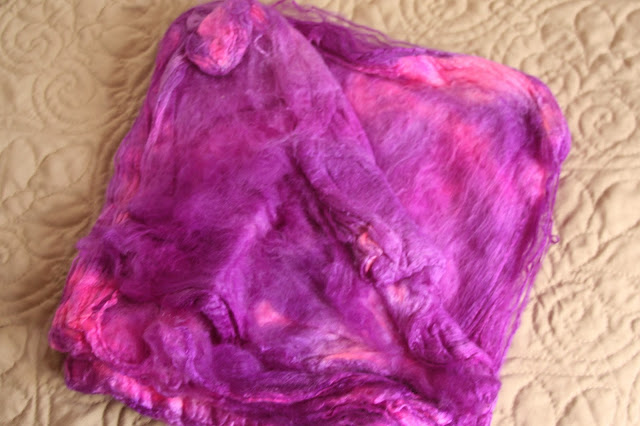 This amazing-ness is a silk hankie from Miss Babs. I have no clue what to do with it, but this color (like a vibrant orchid-y bright pink?) is my favorite, favorite thing that happens to yarn and fiber. I spent I think two solid hours one day a few weeks ago looking for sock yarn this color on the interwebs. I did not succeed. So when I saw this, I snatched. I was thinking that it might become mittens? The Yarn Harlot made some mittens with silk hankies, and she just knitted right off the hankie instead of spinning the fiber first. I think it will be tricky, though, because ever time I touch this every tiny little rough spot on my hands catches on it. Annoying. 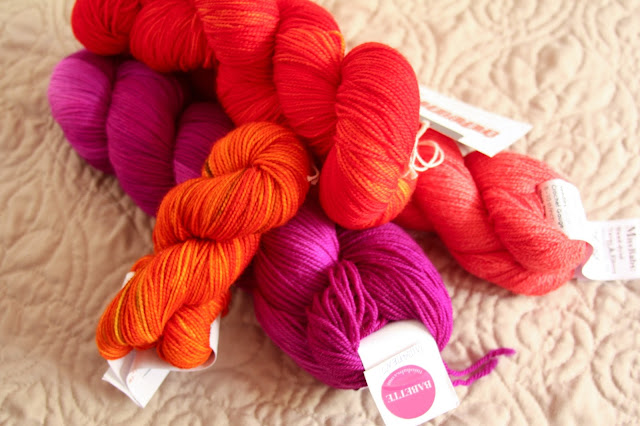 And the yarn. The purpley one is Miss Babs sock yarn, in the same colorway as the silk hankie. I cannot tell you the excitement explosion that went off in my head when I found that. Actually, that's how I felt the entire time I was in that booth. By far my favorite booth at the show. All of the Miss Babs yarn was stunning. I could have spent my entire paycheck in there. So that's the purple yarn; the little skein of autumn-colored yarn is also Miss Babs sock yarn, but in baby-sized skeins. That's going to be a hat for my theoretical neice or nephew, who is due in late September. The coral yarn to the right is.. you guessed it! Also Miss Babs. It's lace weight merino/silk, and it is destined to be a light weight cowl. The vibrant orange on top is the odd man out. It's sock yarn from Neighborhood Fiber Co. It's that tight-twist base that a lot of dyers use, and I am excited to knit with it, because I'm pretty sure I haven't used yarn like that before.

So two pairs of socks, a baby hat, a lightweight cowl, maybe a pair of mittens, and some fiber to squish. Not a bad haul. Also, I apparently have a pretty specific color love right now. Pretty, pretty!

Posted by Emily Ringelman at 8:27 AM No comments:

For the love of socks

Before I ever knitted a pair of socks, I didn't see the point. I dislike wearing socks, because that means that it's not nice enough outside for flip flops.. and I could live in flip flops. Socks constrict my feet, and that makes me antsy, and really, socks are cheap at the store. Why knit them? I was always so perplexed by knitters who solely (ha!) knit socks. But I was going through a phase a couple of years ago where ever knitting project I chose had to be a learning exercise. I learned how to do colorwork when I made a deep scoop neck vest, I learned to knit lace with a triangle shawl, I labored though an applied i-cord bind off when I made a little shrug... and I guess I figured that socks were something I didn't know how to do, so I had better make a pair. It was a terrible struggle. I think that first sock took me a couple of months. I put the one completed sock, the yarn, the pattern, and needles away in a bag in my craft room and forgot about it. When I found the bag a few months later, I was like, big sigh. One sock is no use. I might as well just suffer through the second one. Apparently in those few months away from sock knitting, I became a much faster, better, confident knitter. I whipped that second sock out like nobody's business. And voila! I had a pair of hand-knit socks. Oh my gosh, did they feel wonderful on my feet. I loved those socks. I saw the point of socks. Fast forward to today, and I have a lovely pile of socks. Five pairs. Enough so that in the cold part of the winter I could wear a pair each day to work and wash them on the weekend. 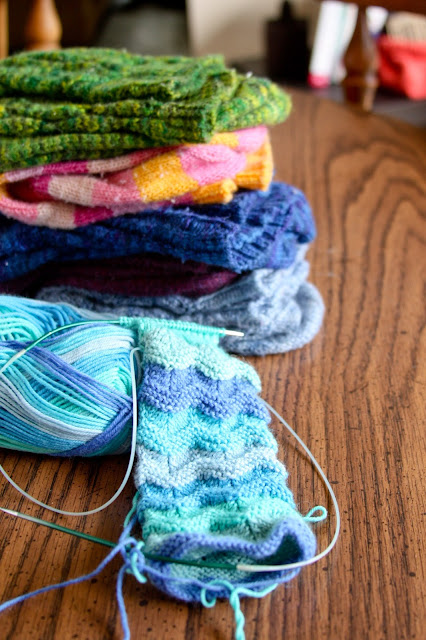 The dark blue pair in the middle was my first FO of 2013. The green pair on top- that's the pair that started it all. It's a solid collection, but I wish there were more. I also wish that unicorns were real, I had gotten a Hogwarts letter at age 11, and each day was 56 hours long. What can you do. I'm still not a terribly fast sock knitter, and socks are not my number one priority, so my collection will have to just grow slowly over time. 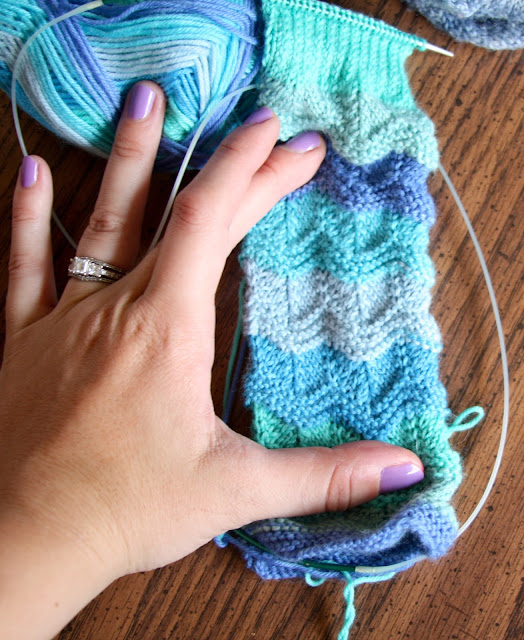 I started this pair a few days ago and I honestly am not sure whether I love it or hate it. I'm not indifferent, that's for sure. It's an extreme, just don't know which one. The yarn is KnitPicks Felici self-striping yarn in High Tide. It's a basic chevron pattern with garter stitch in between. Somehow when I cast on, some magic happened and each garter + chevron chunk is exactly one color. I have no idea how I'm going to make the second sock match. Probably try eleventy-five times until I either get it right or give up and make them not match. Or decide that I actually hate it and just rip the thing out. I have no idea.

Posted by Emily Ringelman at 1:52 PM No comments: