I made some new pillow covers for our couch. I don't know why this isn't a thing that's occurred to me before; new pillow covers are generally pretty quick and are a great way to bring some holiday cheer into the house. I've already got plans for fall and Christmas pillows. 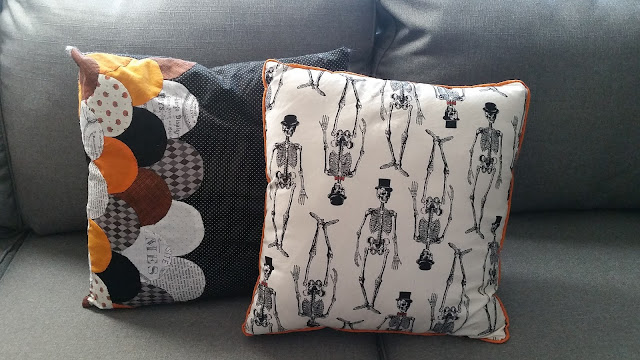 I hand-appliqued some clamshells to the left one. That was not super quick, but I like how it turned out. I used mostly quilting fabrics I had in my stash (most of my quilting fabrics survived the flood- some had rust spots from the pins that were holding them to their storage boards, and some had dye damage from other fabrics, but for the most part, things were saved due to a timely washing) and a couple fat quarters I got at Joann's. The black polka dot fabric is an Etsy purchase, along with the fantastic skeletons on the right pillow. If you look really closely, a few skeletons have bowties. So cute. That pillow was really easy. Just cut two squares, sewed some orange piping around the edge, done. Insta-Halloween. 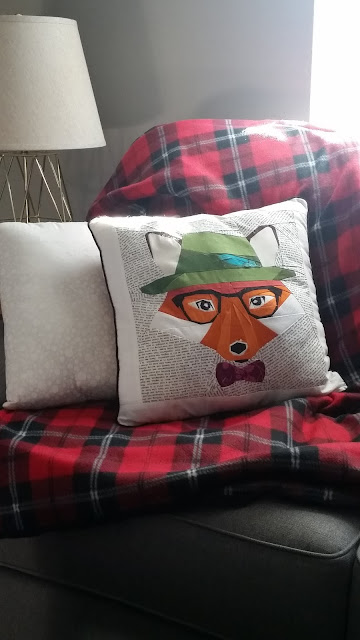 This section of the couch is less Halloween but definitely still Fall. I'm so proud of that fox. It's a paper piecing pattern I found on Craftsy. I think it was probably a bit ambitious for my first paper piecing project, but why do something if you're not going to jump in all the way, right? He's nowhere near perfect but I love him just the same. I also made that red plaid blanket out of 2 1/2 yards of fleece from Joann's, with black flannel binding around the edge. Fairly quick and easy, really cheap because the fleece was on sale for $2.50 a yard, and it perfectly plays into the red plaid thing I want to get going for Thanksgiving and Christmas. I don't know why but Kevin McCallister's house from Home Alone is speaking to me this holiday season. I want everything to be red plaid. 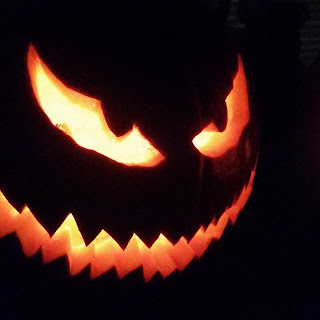 My jack-o-lantern wishes you a happy Halloween! 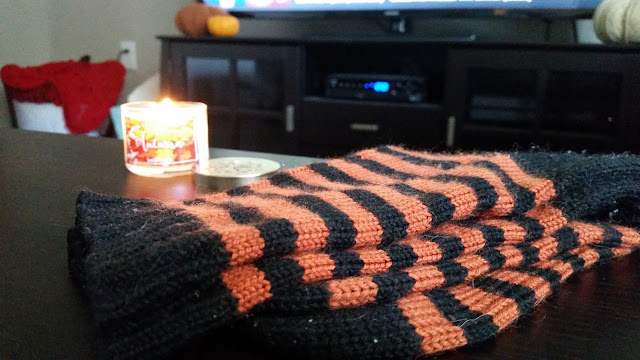 I actually finished a pair of socks! That makes an embarrassing two pairs for 2016. I think that I knitted 8 pairs in 2015, so I'm not sure what I'm doing this year, but hey, at least I have Halloween socks now. They look a bit worn because I actually got to wear them the other day- cold front, yay!

Super simple cuff-down, plain stockinette, heel flap. I used Knit Picks Stroll in Pumpkin (how appropriate) and Black, alternating stripes every five rounds. Ribbing, heel flap, and toe in Black. I used like three quarters of the skein of Black and probably less than half of the Pumpkin.

I currently have no socks on the needles. After the flood, when I lost so much of my yarn and crafting supplies, a knitter from my new knit group gave me this yarn that she dyed. (She doesn't have an etsy store, which is one of the biggest shames I've ever heard, but I'm trying to convince her.) 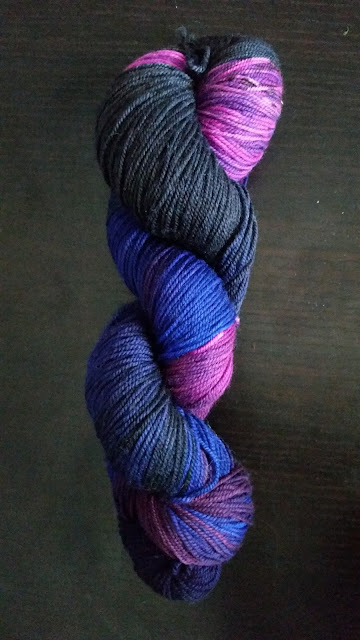 I'm thinking that this yarn is up next, using this pattern- I'd like to have a new pair of socks for our Christmas trip to the Midwest. You know I'll need them. It's so nice to have a to-go sock project for all the time we spend in the doctor's office waiting room these days. It feels like my ob is always running late, so I can usually get a good portion of a sock done while we sit there. And if I don't get the socks done before Christmas I can knit them on the plane. Socks (or, I suppose, mittens) are the best for plane knitting because there's less of a chance of elbowing your next-door-neighbor. I've totally done that before and people tend to not appreciate it- weird.
Posted by Emily Ringelman at 11:09 AM 1 comment: