I have an absolute mountain of "work" knitting to do, but I want to stuff it all under the bed and just knit tiny things for this little guy. 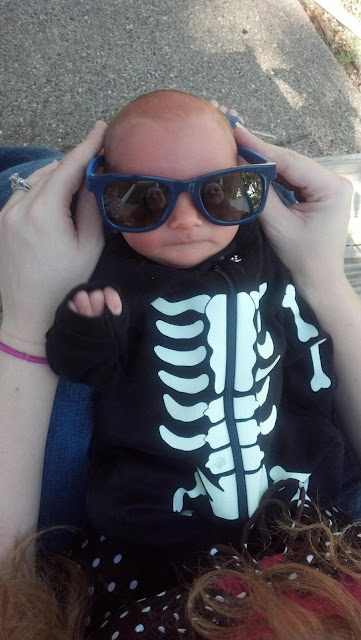 My little nephew, born 4 weeks early this past weekend. Don't you just want to dress him up in tiny things and snuggle him? Little grandpa cardigans, and frog onesies, and hats that look like sheep, and tiny tiny pullovers. It's easy to justify... preemie stuff has got to be super quick to knit, right? Right?

Excuse me while I go shove some knitting under something.

Posted by Emily Ringelman at 3:43 PM No comments: 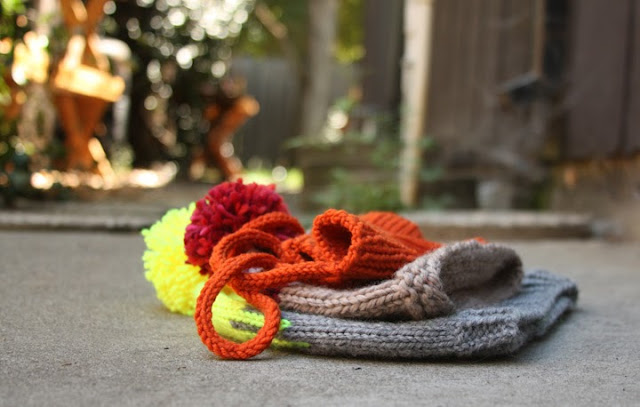 What with all the design work I've been doing (and there's more! Two patterns in one magazine for the winter! No, I can't tell you where!), I have really been loving small instant gratification projects. No thinking, just knitting, done in an hour or two- no longer than one evening. Can't give up any more time than that. An aside: publishing is on a long time scale. I cannot wait until all of the work I've been doing actually shows. Right now, everything looks the same to an outsider, but it's workworkwork over here! I'm like a chihuahua, just shaking in anticipation of all the good that's about to happen. 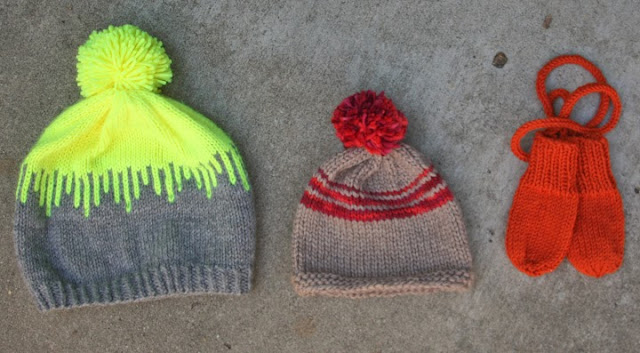 Left to right: Drips, a free pattern from the pretty little fiber co., knitted in an eye-searing neon yellow acrylic from Hobby Lobby and I think some gray Plymouth Encore?; a baby hat for my friend's new baby, knitted using all leftovers, which is one of my favorite things- Cascase 128 Superwash and Malabrigo worsted; and a pair of baby mittens for my sister's unborn little one, using leftover Plymouth Superwash. I have this enormous box of little leftover balls of yarn, and it brings be great satisfaction to actually use them. Babies are the best for that, because everything they need is little.


Posted by Emily Ringelman at 7:00 PM No comments: 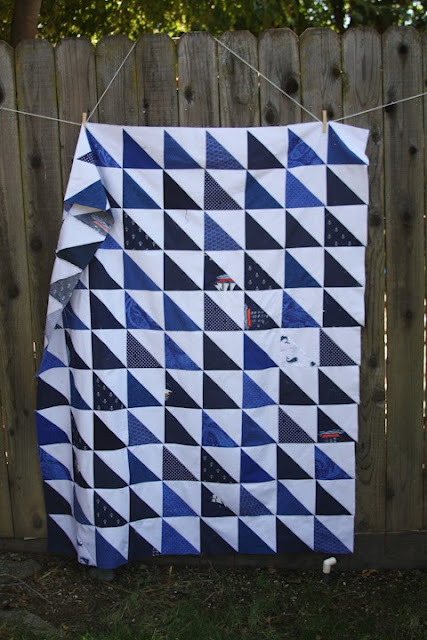 (It's a nautical one! Surprise, surprise. Again with the "all of the nautical things" train. There's anchor fabric, and ship fabric, and whale fabric. Yup, whale. And some [a lot] of the corners don't match up. I don't care.) 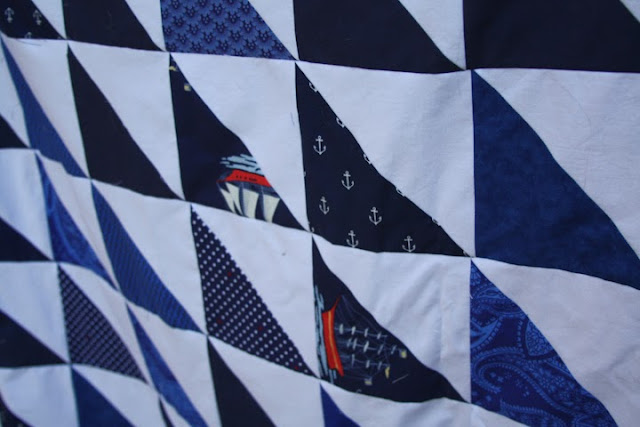 And then promptly started another. 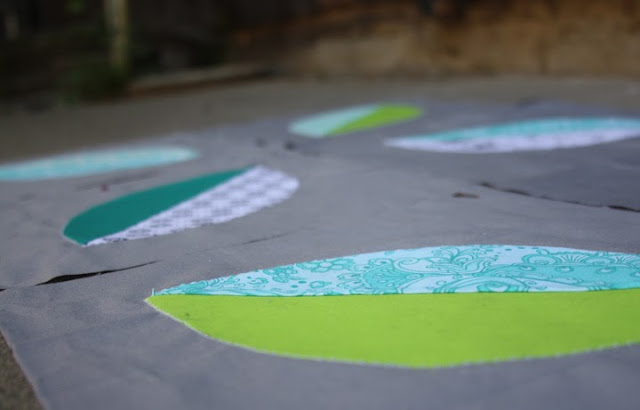 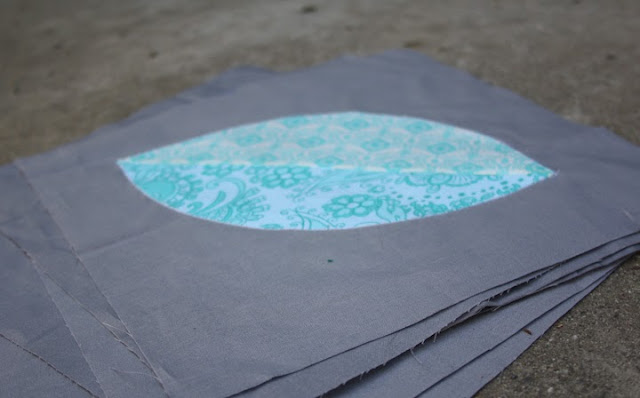 This breaks my usual rule of having only one quilt in progress at a time, but a) I'm trying to use up some of my stash before moving, and my stash currently does not include batting or backing fabric, and b) I really like this quilt design. So I don't care. I do what I want.

Posted by Emily Ringelman at 10:30 AM No comments: 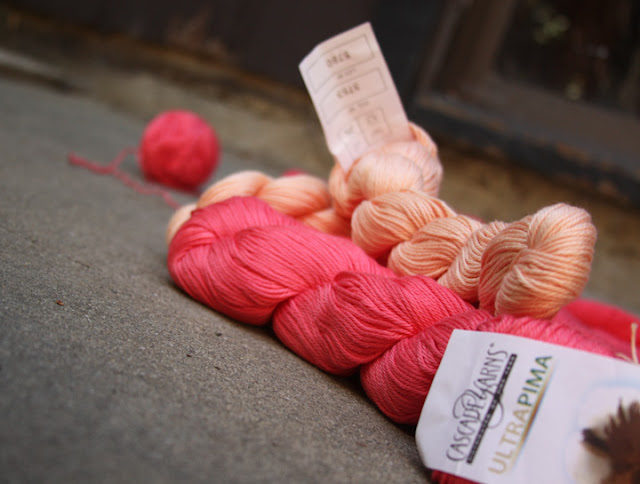 After I decided that I was going to be a Professional Knitwear Designer, I discovered that magazines, both online and print, have calls for submissions ALL THE TIME. I don't know how I didn't know about this before, but oh well. I know now. I submitted a design that I was actually really confident about and really liked to a well-known magazine, and... got rejected. Which is fine. I try not to be delusional. That same day that I got the rejection notice, I was reading something online about yarn support, and how all you have to do is ask a company, and you'll often get the yarn provided to design your sweater/hat/cat cozy/whatever. I sent my proposal to Cascade Yarns, and to my surprise and excitement, they agreed! I got a lovely box of free yarn in the mail, and it was awesome. 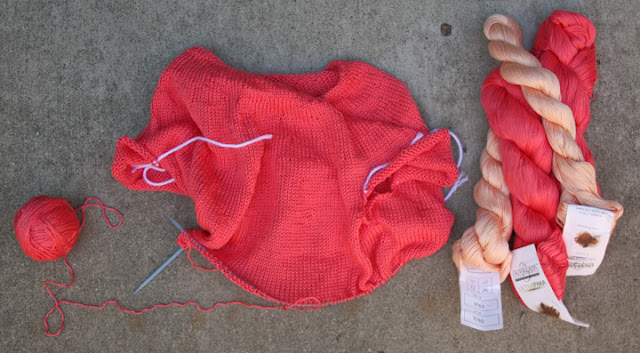 Working on my design now. Pretty colors, yes? I really, really hope to have this totally published by mid-September, because that is when we move across the country. This feels like a good goal to me. 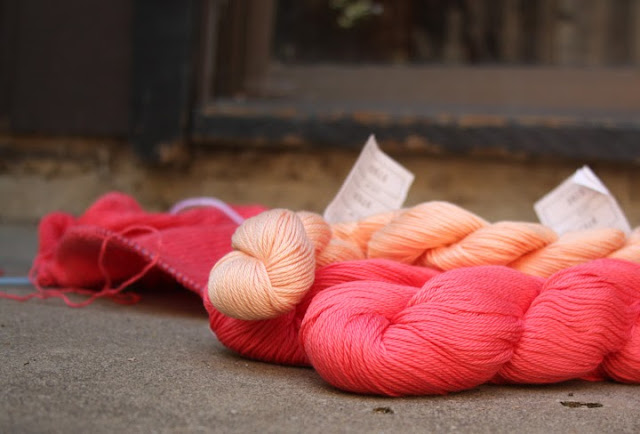 The yarn was less free, but I'm also working on this design: 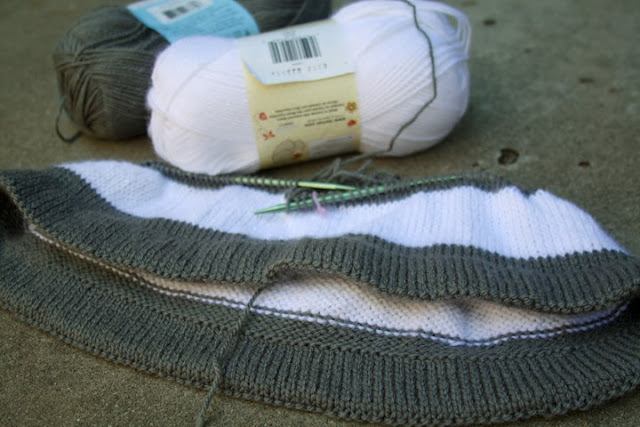 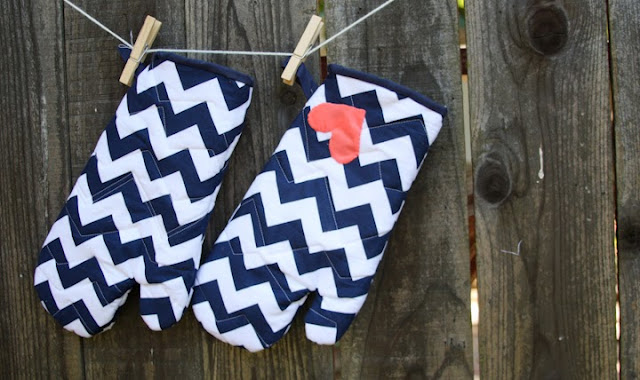 We're moving to Delaware in the fall. Yup, Delaware. I shall leave my beloved California and journey to the land of soft-shell crab, historical reenactments, and really old houses. I may have said this a few times, but... I love, love, love all things nautical. Delaware- it feels nautical to me. So I informed my husband that our new house in Delaware is going to be decorated in an entirely nautical fashion. The whole thing. Luckily a good portion of our California house is already nautical, so I can just redistribute in Delaware. I did make us a new set of oven mitts, though. We didn't have any nautical oven mitts, and that was just a shame. 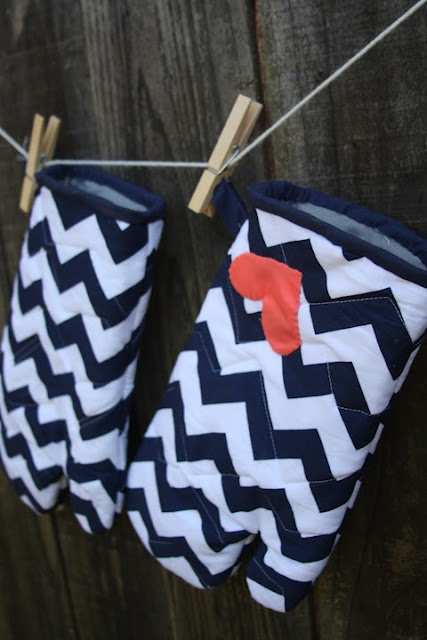 They were pretty quick. The chevron (I know, it's everywhere) is Riley Blake, and I just did some simple chevron quilting with Insul-Brite, a layer of cotton batting, and the fabric. I made the lining separately this time, which I really like, because now there are no visible seams. 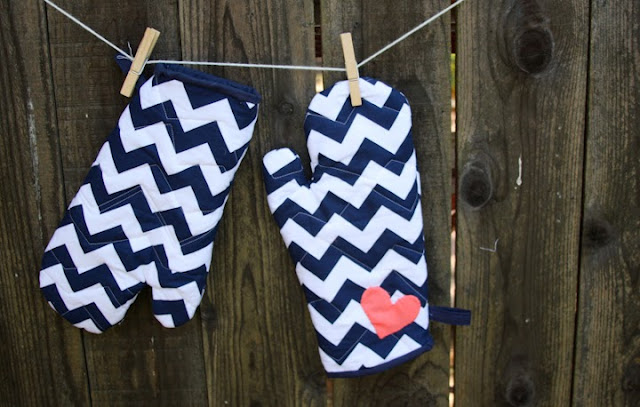 I was making a "dress" I bought at Target longer, because my entire butt showed if I so much as leaned forward, and I had some extra fabric, so I needle-turn-appliqued a heart to one of the mitts. I forgot that I don't like to hand applique, but it was just a small piece, and it's cute. 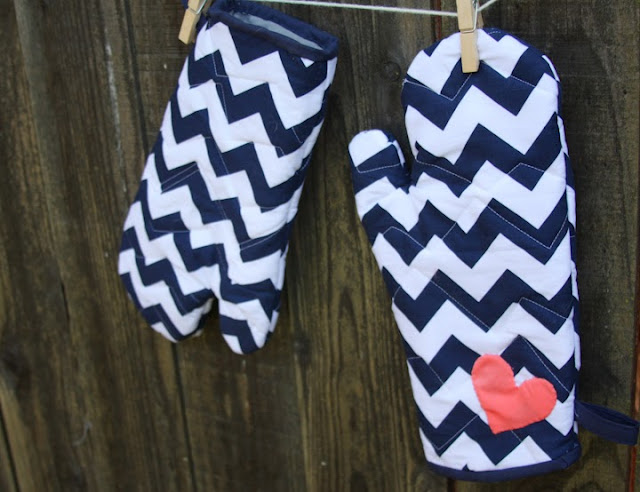 Now I think I need to learn to screenprint so I can make us some anchor-printed tea towels to go along with these oven mitts. If everything we own is not nautical, maybe they won't let us into Delaware. So it's best to be sure.

Posted by Emily Ringelman at 7:00 AM No comments:

Back in May, I decided that I wanted to go from being a dabbling knitwear designer to being a Professional Knitwear Designer. It's something I've been wanting for a long time, and actually tried about a year and a half ago, but it turns out that if you already have a day job unrelated to knitting, being a Professional Knitwear Designer on the side is really, really hard. It takes all of the time. Seriously. As a self-professed nail polish addict, I have had blank nails for like a month now because I don't have time to have my hands still for that long. It sucks. My nail polish collection is upset with me.

So, arbitrarily, in May, I thought, you know what? Now's the time. Again. In a convoluted Google-blog-Ravelry path that I do not now recall, I found out that there was an online magazine called Holla Knits!, and that it was taking submissions for the fall issue. And the deadline was in like a week. Having never put together a magazine submission, I was a little lost, so of course, I Googled it. I knitted a swatch, drew a (really terrible) sketch, and wrote a little description of what I had in mind, and mailed it off. I think my exact thought when I put it in the mail was, "Well, it was good practice at least." Imagine my surprise when one week later, on the day before my birthday, I got an email saying that my design would be in the fall issue. First, silence. Then, literally jumping up and down, outside, in public. Then calling everyone I know. Then... panic. I knew when I submitted the idea that it was outside of my skill range. Also, I've never written a sweater pattern. Ever. Or size-graded a pattern. Or any number of things that I would now have to do, and on a deadline.

But... I did it. I made a sweater. I wrote a pattern. I size-graded the crap out of that thing. I learned just about everything there is to know about top-down designs, making charts, raglan increases, lace, my personal stress limits, yarn quantities, and that yarn and wine only go together up to a certain, specific point. And it's done, and I love it. Can't show you the whole thing, but here's a teaser. 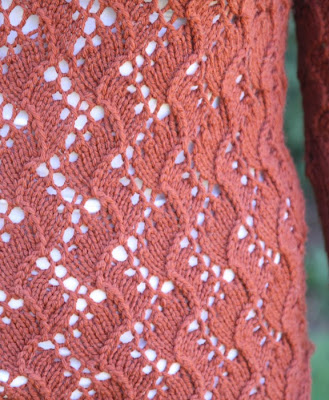 I'm so excited to see my design in a proper knitting forum! I hope the pattern does well. Now I'm working like a the crazypants I am to get a couple of other designs self-published before this magazine, in the blind hopes that I will become an overnight sensation. :) Hooray, random last-minute magazine submissions!

Posted by Emily Ringelman at 2:51 PM No comments: