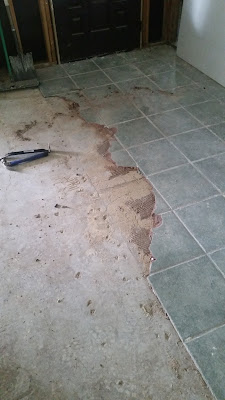 This was my Saturday. So fun.

It's been about six weeks since my house flooded. I have never had a more insane part of life, including when we moved from California to Delaware. Every single day is spent running out to the house to demolish something else, replacing things that were lost, meeting with the contractor/plumber/framer/mold remediator/FEMA people, filing paperwork for the car/house/rental assistance/insurance/whatever, trying to get the apartment into livable shape, trying to find things that it turns out were actually lost, etc. It's exhausting, physically and mentally. On top of that, I'm pregnant, so it's been extra exhausting for me.

When the house flooded, I was under contract for five different magazine designs. I honestly wasn't sure I'd be able to complete any of them, but today I'm mailing off samples number 3 and 4. Number 5 is still with the sample knitter, and it's coming along splendidly, so I'm proud of myself for managing to pull this off. I have no idea how I did it. I doubt I could do it again. I'm sure it could have been done better. But it's done.

Therefore, a reward. I've been thinking about a maternity wardrobe for the fall/winter. Mostly, I don't want to buy a bunch of maternity clothes when a) we don't have a lot of disposable income, because everything is going towards replacing everything we lost in the flood (PSA: get insurance coverage for your "stuff," not just your house. 100% worth it, can't tell you how much I wish we'd had that coverage.), b) I have no storage space in this dinky temporary apartment, and c) I'm honestly not sure I want more than one kid, so I don't want a bunch of clothes that I wear for only like 4 months then never need again. I think I've come up with a decent solution: "toppers." I'm thinking that if I can get away with my normal jeans (using this trick and this trick), plus a few super basic maternity tees and tanks (in solids and stripes, maybe a simple print or two), I can jazz everything up with what I'm calling "toppers." Cardigans, blazers, vests, anything that opens in the front and can be worn that way without looking stupid- that's what I'm going for. 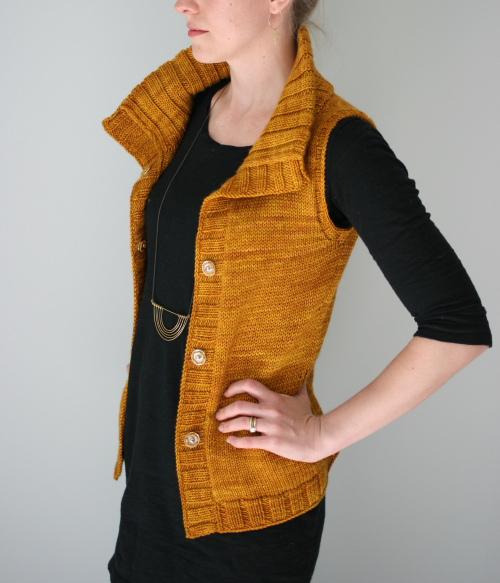 I decided that because I finished most of my contract work, and because things are finally starting to feel calmer around here, and because dang it I deserve it, I cast on Hillary Smith Callis's Mielie Vest the other night. Totally fits my planned pregnancy wardrobe, PLUS I'm re-purposing a bunch of Malabrigo Worsted from a sweater I designed in, I think, 2010. The sweater was saved from the flood because it was in a big ziplock. I don't know why, but I'm glad my past self did that. I wore the sweater only once because I realized after it was done that I had done decreases for the waist, but had forgotten to increase back up for the bust. It was not comfy. (I was new to designing, so I'm not that upset with my past self.) That sweater design ultimately became Gillywater. And now, the yarn is going to be a vest. Life is a full circle and all that. 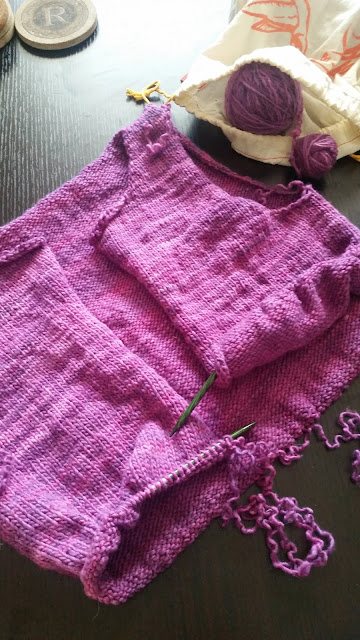 It's been the biggest mental relief to knit something from someone else's pattern, in a decently large (18 sts/4") gauge. I am SO HAPPY while making this. Everything lately has been my designs, in sport weight. So tired of that. I admit that I didn't soak the yarn after unraveling the sweater. I was impatient. I don't care. It's fine. After everything that's happened, I'm allowed to be the boss of the yarn, and if that means that I don't want to soak out the kinks then dang it I'm not going to. I'm in control of something, at least. 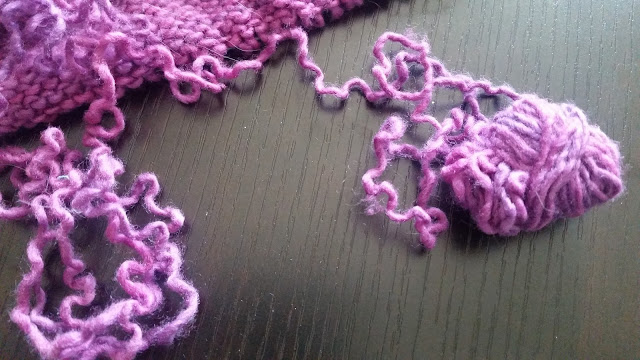 Every month Knit Picks released a free three-piece "Keeping Home" collection for either the kitchen or bathroom, and September is my month! 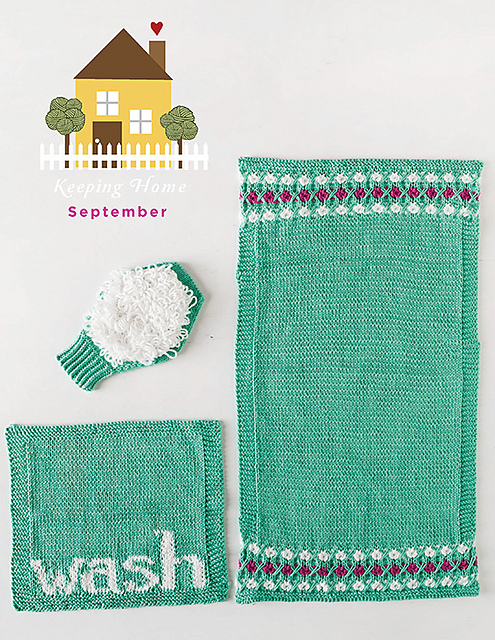 all photos courtesy of Knit Picks

My collection is the Bit of Whimsy bath set, a three-piece set made up of a hand towel, a washcloth, and a washing mitt.

The hand towel features a fun, sort of unusual bubble-looking stitch pattern at the ends. You could use one color for all three rows of bubbles, or three different colors, or a pop of color in the middle like the sample. 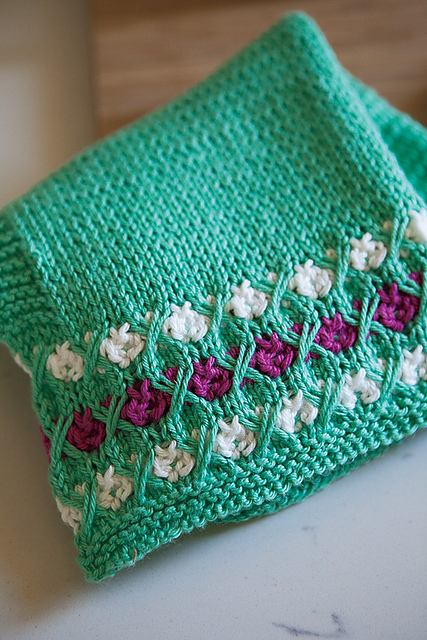 The washcloth very helpfully reminds you to "wash" in intarsia! This is a great project to practice intarsia if a) you've never done it before, or b) you're not too familiar with it and want to try it on a small scale. 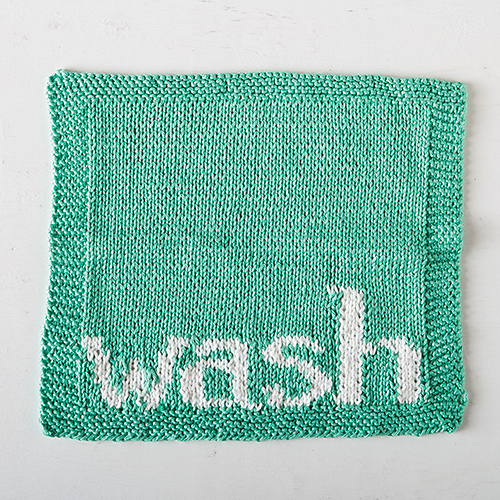 The washing mitt it pretty much a big mitten with no thumb. A loop-stitch pad is sewn onto the palm side of the mitten and will get that soap nice and sudsy. Lots of uses for this thing- wash your baby, your car, the dog, yourself, whatever. I bet kids would get a kick out of using it in the bath. 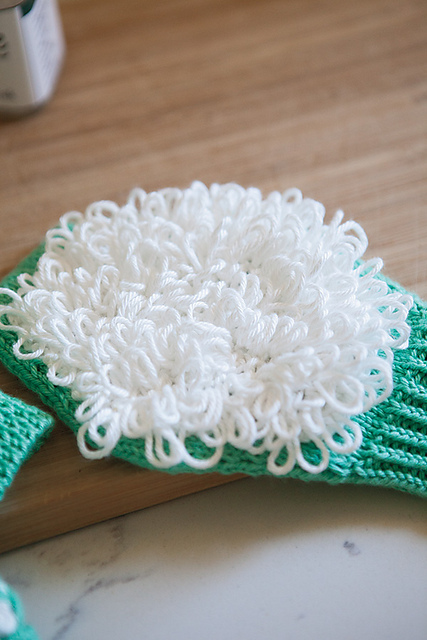 All three pieces are knitted with Knit Picks Shine Sport. You could also use Comfy Sport if you aren't into shiny yarns- not that Shine is too shiny, but if it's not your thing it's not your thing.
Posted by Emily Ringelman at 6:42 AM 1 comment: