It's possible you've heard this already, whether from Twitter, or Ravelry, or somewhere else random: my house has been flooded, and we lost not everything, but a lot. Really a lot. This is likely the worst national disaster since Sandy. It's a war zone down here.
This was our carport/deck: 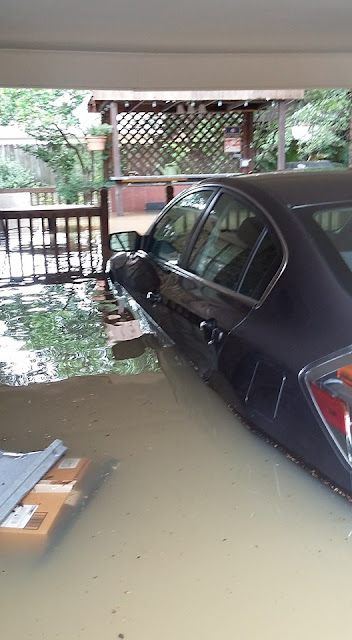 Here's my story.
Sunday, August 14th, we woke up at 4:50 am by someone pounding on our door. This was, naturally, alarming; middle-of-the-night disturbances are never good news. Our neighbor across the street was at the door to warn us that water was coming up the street, fast. There was at least a foot of water in the street already at this point. The neighbor said follow me, we're going to a friend's house in a safe area, we've got 15 minutes. I had a remarkably clear head, so I grabbed a duffel bag, stuffed some clothes, my laptop, cat food, and water bottles into it; moved as much as I could up higher (like my wedding dress, some knitting that was on the floors of the craft room and living room, some books from lower shelves to higher); grabbed the cat carrier and the cat; and most importantly, put the "important documents" box (passports, insurance paper work, tax returns) into the truck. While I was doing that, my husband was shoving as much as he could into the attic. He had the wherewithal to unplug expensive electronics, and he moved our tv up onto the speakers, which was clutch, because it would have been underwater had he not done that.

We left our house at 5:15 am, and we barely made it out of the neighborhood. Luckily we have a truck, because I don't think our car would have cleared the rapidly rising water in the street. We followed our neighbor (who we hadn't actually spoken to before this; weird how disaster brings neighbors together) to his friend's house, where we mostly just huddled, terrified, until 7:30 am, when my husband couldn't take it anymore and drove back to our house. He waded into our neighborhood (already a terrible sign) and found that our house had 10 inches of water in it already. I cried.

At that point we knew that everything had changed. Cell service was down (and would remain down for several days), but I had my computer, so I emailed my boss who I knew had space in his house, and we took our few meager possessions and our terrified cat and went to their house. 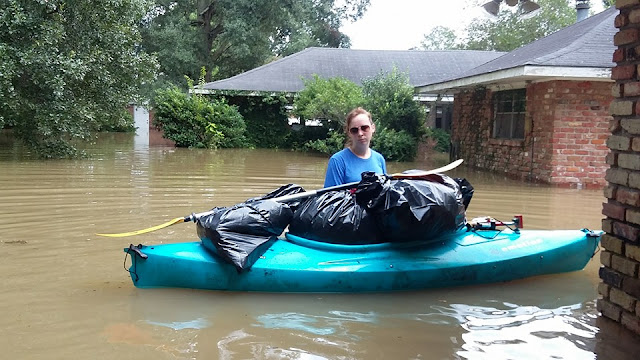 Kevin really wanted to get to the house to see a) how much water was there, and b) if we could save anything else. This *is* South Louisiana, so we borrowed a friend's boat and drove to our neighborhood. It was a nightmare. Traffic was backed up everywhere, water was rising across roads and bridges, emergency vehicles were out in force, helicopters were zooming back and forth rescuing people, Cajuns with their jacked up trucks were hauling boats down every road... it was chaos. We managed to get about a mile from our house before we had to start boating. I will never, for the rest of my life, forget what it was like to boat down a street that I drive down every day. We couldn't get too far into our neighborhood before we hit a dry street- it was such a weird thing, so be in water so deep the oars didn't touch the street, then to turn a corner and have to pull the boat up onto someone's lawn. We ended up rescuing an older couple who hadn't made it out in time, and we tried to take a man to his house to get his dog, but we couldn't boat far enough. Finally we had to give up and boat back to our starting point, which was good timing, because the water was rising in that intersection and we didn't have much time to get the truck out before the streets flooded there, too.

We got in our truck and managed to find a different way in around the back ways. We were still at least 4 blocks from our house, but we had given the boat back. In a fit of stupidity, we waded into our house. The water was chest deep in parts, smelled awful, was murky and full of debris, but we did it. We shouldn't have, and I knew that at the time, but it's done. We got into our house and I lost it. You can't imagine what your house looks like full of water until you actually see it. My beloved things were floating everywhere; all of my carefully sourced, refinished, painted furniture was underwater, yarn was floating in the living room, my shoes floated out the door when we opened it, and while we were in the house, the fridge tipped over. It was awful. We had two kayaks in the backyard; we floated them into the house and loaded them up with wedding photos, mementos, things that are expensive, and I honestly don't even remember what else. I did not have a grip.

We got back out of the house and pushed the kayak back to the truck. A boat picked me up just down the "street" from my house, and thank goodness, because it is really, really hard to wade through water that deep.

The next day, we heard reports that the water was falling. Kevin donned waders, borrowed a boat from work, and asked me for a list of things I wanted. He made it to the house again, and said he though that the street would be driveable by the afternoon. We drove back that afternoon and were able to park a block away and kayak in. The house had only a few inches of water in it by that point, so we saved what we could. The waterline was about 3.5 feet in the house, so we saved a lot of what was above that, including a lot of my good yarn (thank goodness).

Wednesday the neighborhood was totally driveable, so we went back with a big crew. We got everything salvageable out of the house, including dishes, solid wood furniture, that kind of thing. Everything that was ruined (which was so, so much) went to the curb. There's not a lot worse that seeing most of your material possessions ruined, heaped on your muddy lawn. Want to see a heartbreaking video? This is the inside of our house, outside. 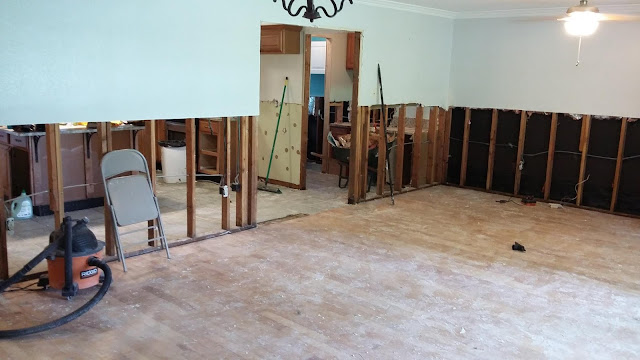 State of the house a day or two after the floods. There's less floor and kitchen now.

Since then, we've found an apartment to live in; hired a contractor; ripped out the walls, floors, kitchen, and bathrooms; consolidated our remaining things that had been scattered over four different locations; washed everything that needed washing (a shocking amount; even if things didn't get wet, they picked up a nasty smell), and now we're trying to get back to a normal life. But not really, that's not going to happen until we're back in our house. I miss the house. I know they're just things, but I miss my things. I miss my books.

So, that's my story. It's better than some stories here in Baton Rouge, worse that others. Many had water up to the roof.

Should you feel the urge to help, I've listed some charities in this thread on Ravelry that need donations. Also, I'm having a 40% off sale on my patterns until August 31st to help us raise money to replace what we lost. The structure of the house was covered under insurance, but not a single item inside. (The car was covered.) Heartbreaking, and devastating, and completely disruptive, but there's not a thing we can do besides try to return to normal. That, and make some house changes we had been wanting. Why not? The walls are already down. 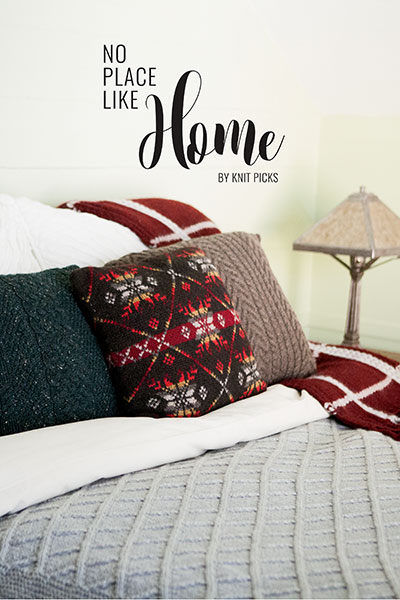 (All photos courtesy of Knit Picks.)

A couple weeks ago, Knit Picks released my new pattern that I very cleverly named the Antler Cable Pillow. It's part of the new "No Place Like Home" collection, a 15 pattern book divided into three style sections- "Farmhouse Flair", "Lodge Living", and "Southwest Style". I was thrilled to see that my pillow is actually on the cover of the book! (Along with two other pillows and two blankets, but still. Exciting.) Here's a picture of just my design. This pillow is knitted in Wool of the Andes Superwash. Making this pillow was my first time using that yarn and I really liked it! It's quite a bit softer than normal WofA. The pattern has options for either a cabled front and stockinette back or two cabled sides. It's knitted in two pieces and seamed/grafted together at the sides and top. The pillow cover fits snugly on an 18" pillow form. 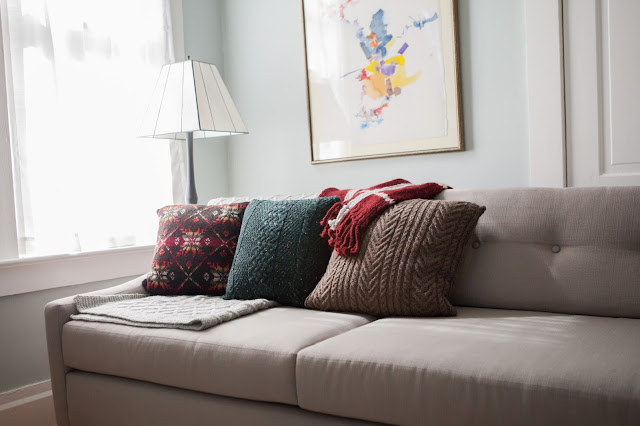 There are several patterns in this book that I'd like to knit if I get the chance.

The Peaks Pillow below is a fun colorwork pattern that I think could be super cool in less Southwest-y colors (I'm not into Southwest style.) 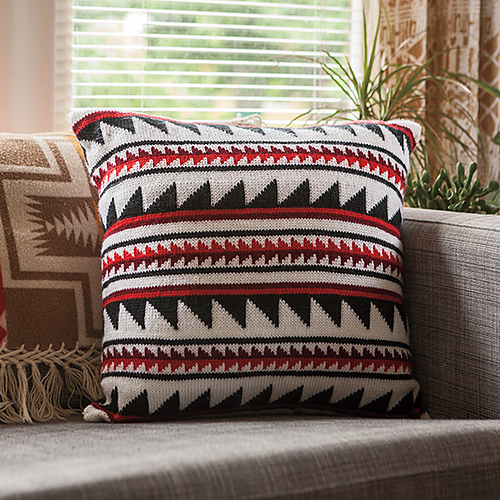 Holli Yeoh's Shadow Weave Placemats are way, way cooler than Ravelry knitters are giving them credit for. Take a close look at that ombre- so cool. 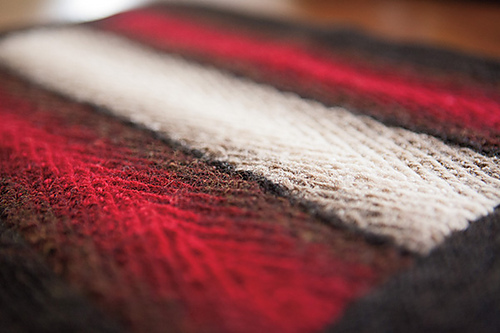 Overall another great Knit Picks collection. I really love working with them- they're so easy to work with, and the books always turn out so great! I've got a huge backlog of stuff I want to knit from Knit Picks collections. Wish I could knit in my sleep. I'd be so productive.

Posted by Emily Ringelman at 7:29 AM 2 comments: