Another quilt, and trying some new techniques

Lately I've got it in my head that I should learn more quilting techniques. Don't know why, I just felt like I should. So I learned English paper piecing, and cathedral quilting. I also discovered that pillows are ideal forms for quilting practice, because 1) they're small, 2) I love them, and 3) if you think about it and plan ahead only a tiny bit, they are easily changeable among your pillow forms. 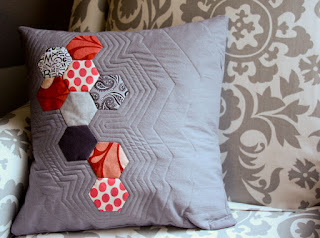 Here's my English paper pieced pillow. I used PowerPoint to make a bunch of hexagons, then printed them and cut them out. I picked out some fabrics from my stash that would match my dining room decor, which is gray, white, and coral. I think that polka dot is Micheal Miller, and the other coral one is Salt Air by Cosmo Cricket (which incidentally, the pillow cover that used to live on this pillow form is made of). The other prints I've either forgotten or they came from Joann, and the solids are Kona.

The paper piecing took me an evening, and by the time I was done, I was really sick of it. I can't imagine doing a whole quilt. Then I hand-appliqued the hexagons to the gray fabric, made a little quilt sandwich, and did some echo quilting. The back (here's the interchangeable part) is an envelope closure so it's easily switched out. Good for short attention spans and spills. I really love the way this pillow turned out- it's very graphic and modern, which is a style I find myself drawn to more and more recently. 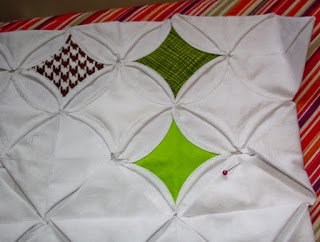 I also wanted to learn to do cathedral quilting. I kind of suck at it. It requires much more precision than I have. It will also end up as a pillow cover, but probably not soon, because I don't want to do it anymore. At least not right now. It's just SO MUCH hand sewing work, and if I'm going to beat up my hands, I'd rather it was from using double-pointed needles than from hand sewing. Also, I put the needle through both my thumb and index finger- not at the same time, but in the same hour. That just made me mad. 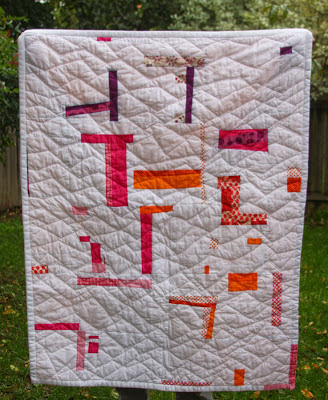 Aaaannd... I made another baby quilt and Etsy-ed it. When I started this quilt, the point was to use what I had already and see what happened. I like what happened. The piecing took a while, but it looks neat.


I quilted it with a random chevron pattern. And I made very, very sure to quilt it LIGHTLY, unlike the forest friends quilt. See, I can learn! It's much softer and more supple. I like it a lot.

Orange chevron flannel on the back, because it goes with the quilting, and well, it's trendy, and I'm a sucker for trends. Despite being "baby" sized, it's actually the perfect size for my lap whilst doing computery things. I may or may not have it on my lap now. 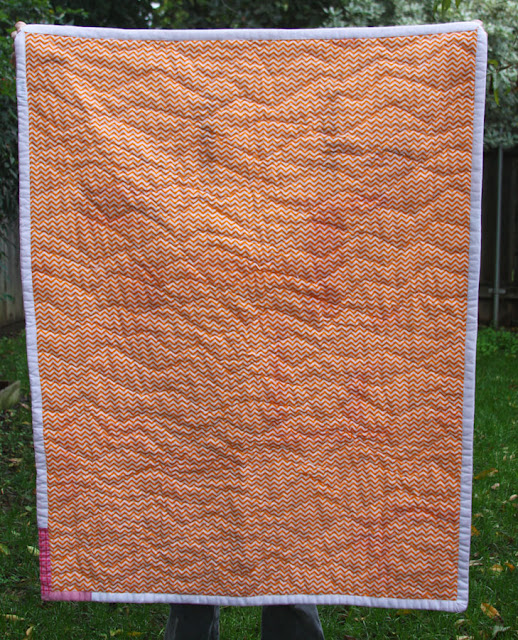 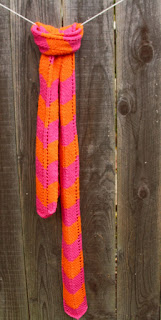 I also knitted a scarf. The colors are eye-searing. It's my own pattern- the Yacht Club scarf. Just for fun.

Posted by Emily Ringelman at 4:18 PM No comments:

Recently, I've had a moderate obsession with foxes. I enjoy forest creatures in general, but there's just something about foxes that is extra good. I even knitted this fox stole, which I'm unsure I'll be brave enough to actually wear in public, but that's another post entirely. So when I saw the Ed Emberley "Happy Drawing" forest friends fabric on Etsy a while back, I knew that I had to own some of it. Then we got invited to a baby shower, so now there is a forest friends baby quilt. 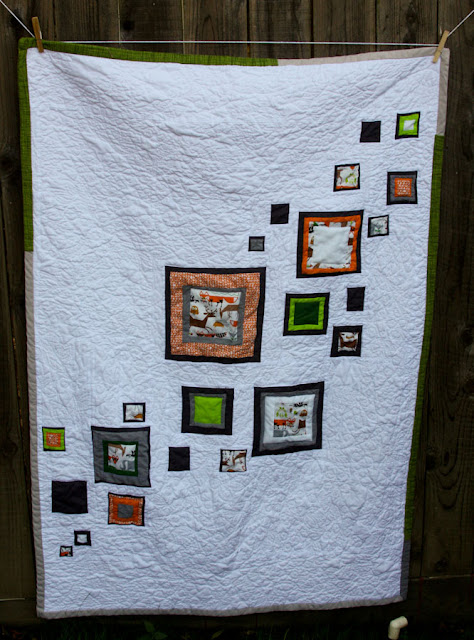 I did wonky log cabin squares (which I wish were either wonkier or more perfect, because they are just wonky enough to look unintentional. oops.) with the forest fabric, that orange squiggly fabric that is also from the Happy Drawing line, and some Kona solids- light gray, charcoal, bright green, dark green, and a macaroni and cheese color. I think this is the most piecing I've done for a quilt so far- getting all those squares to fit together in a manner I found pleasing required SO MANY little white rectangles and squares. After making this quilt, I understand the need for a design wall. I had the blocks taped to my closet doors as I was arranging, which is just not a good solution, because then I couldn't open the closet. 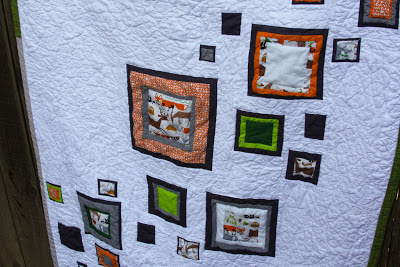 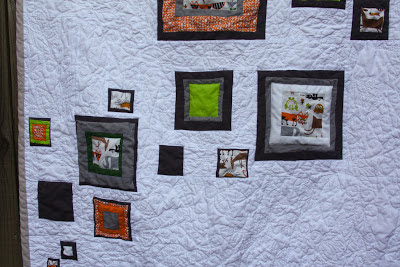 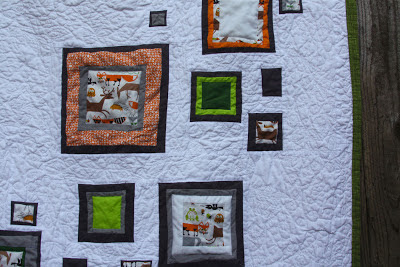 I did a nature-inspired quilting pattern that is something I frequently doodle when I'm in meetings and such. Unfortunately, it got totally obscured when I washed the quilt. That made me upset, because it took FOREVER, and I was working on it literally up to the minute we left for the shower. It's sort of visible on the back: 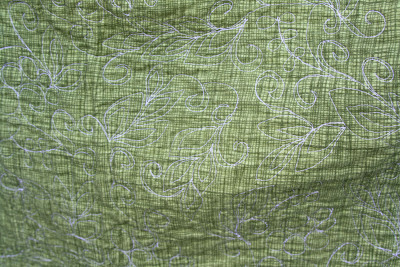 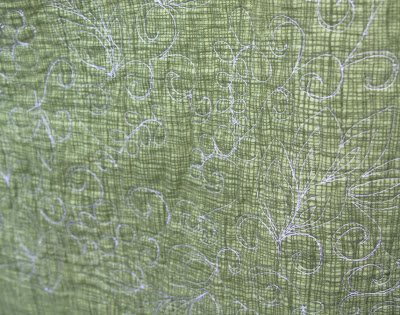 But sort of not really.

It was a good lesson to learn. Won't do such a complicated quilting pattern on this type of quilt again. As my mom says, my 478th quilt is just practice for my 479th. Although with me it's more like my 6th is just practice for my 7th. I started making some more of the log cabin blocks to make another of these quilts (to be put in my Etsy store), and I think I will do something way simpler with the quilting, like concentric squares, or even straight lines. Overall, I like. 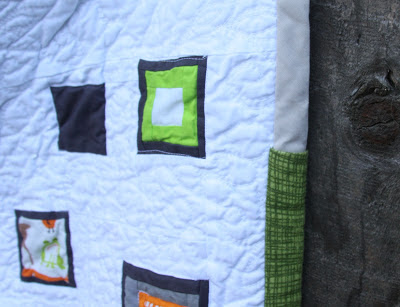 Posted by Emily Ringelman at 5:56 PM No comments:

I'm all for a big Halloween blowout with lots of dancing and a keg, but this year, all I wanted was a smaller, classy, fancy-food-and-drinks cocktail party. The piece de resistance was my haunted mansion dessert table, resplendent with dripping blood candles, ravens, and a big skull. I went entirely overboard with, well, everything, like I do. I started cooking literally a month before the party because I was so excited. My awesome friend Sean (SeaFog Photo) took these amazing pictures after a moderate amount of dessert devastation had already taken place. 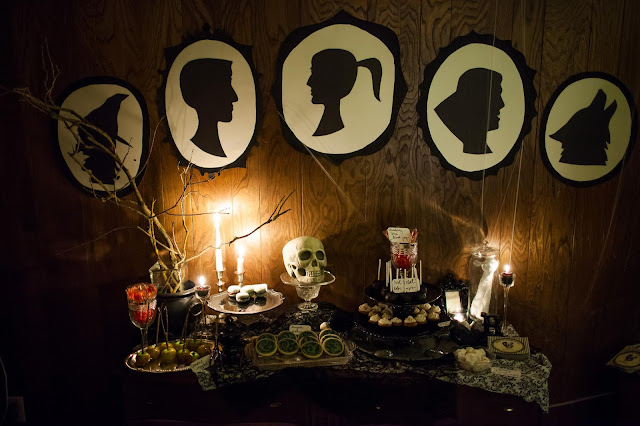 I made those silhouettes several years ago and just get them out every year. Easy, effective decor that totally goes with the haunted mansion theme. The bones in the jar on the right I made 2 years ago when Martha Stewart's Halloween theme was something like "Cabinet of Curiosities". They're made of that plaster stuff doctors use for casts. The sticks are from my yarn, the skull is from Walmart, and I made the table runners for a wedding several years ago. 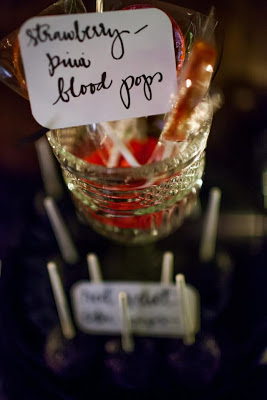 I've made lollipops before, but they always looked like a 5-year-old made them because I had no mold. Now I have a mold, and my lollipops rock. Next time I'll make non-"bloody" ones so that people acually eat them. 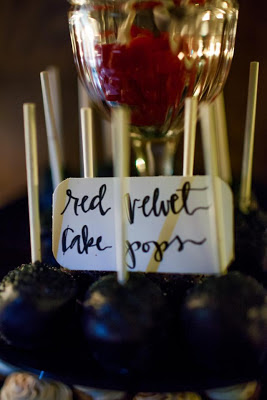 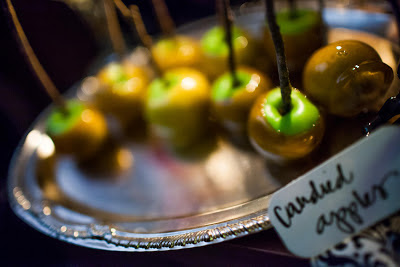 These, though... without thinking, I put the hot candy-coated apples down onto wax paper. So each apple had a wax paper bottom. Oops. 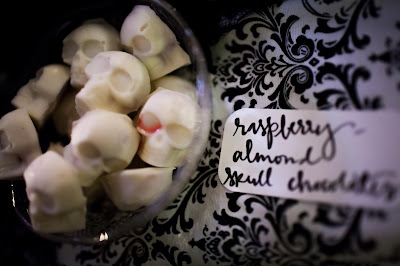 Made these skulls with a mold I got for my awesome and un-blogged Zombie birthday party. I think it was an ice-cube tray originally. 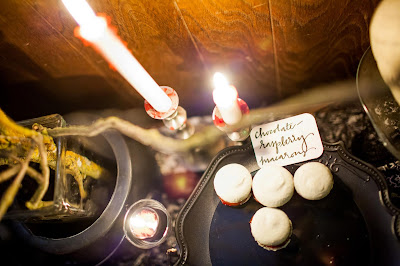 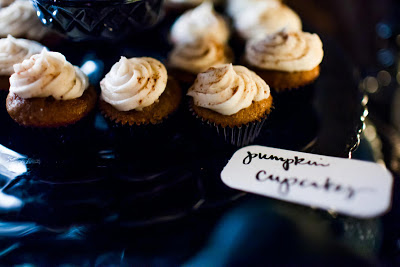 And of course, cupcakes. It's a compulsion by this point.

Overall, great success. But really, dessert tables are a TON of work. I'm really happy with how this one turned out- I think it's my best yet. Maybe another one for New Year's? Could be fun!