I finished my first pair of socks for 2015. Jaywalkers, by Grumperina. 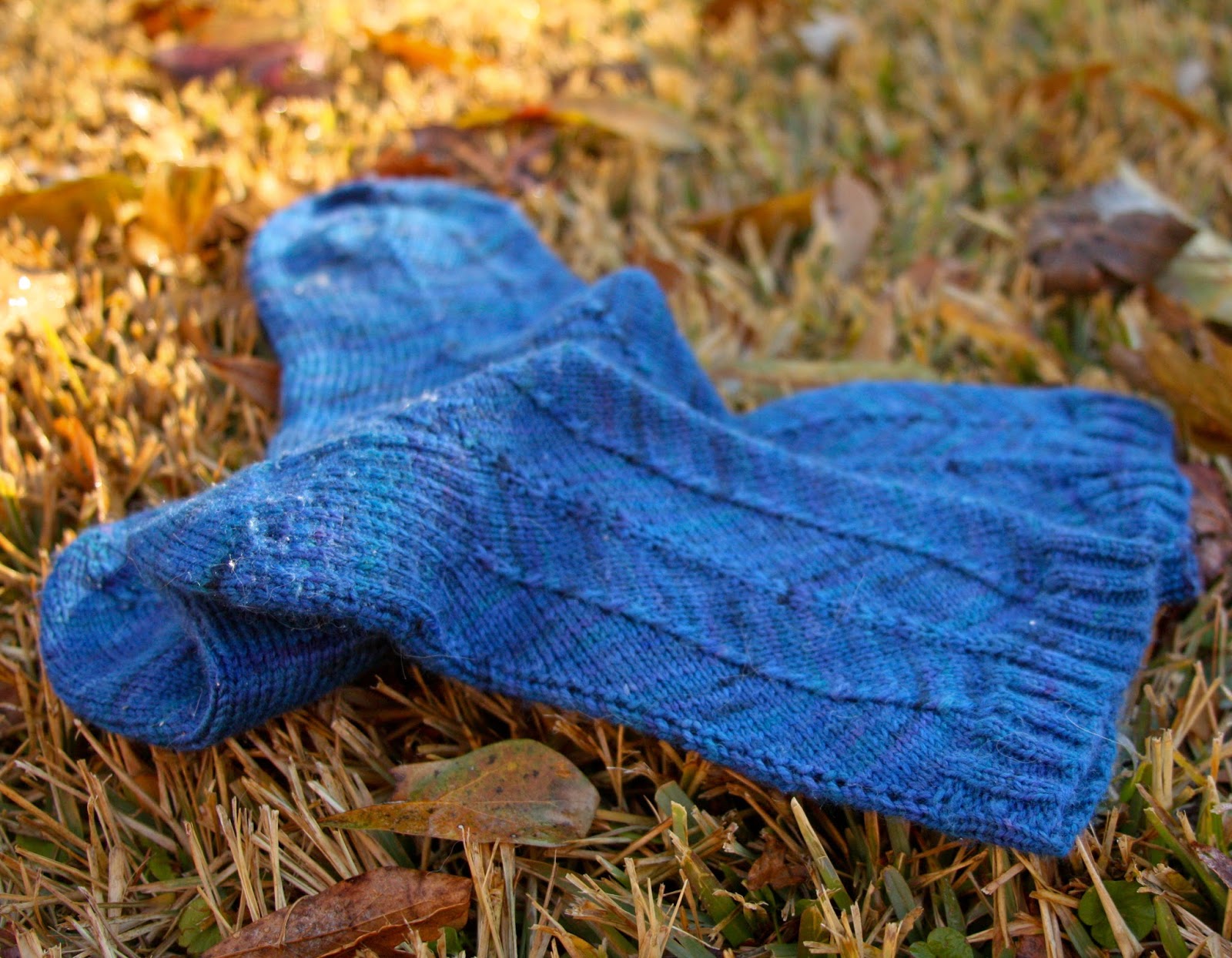 I used a skein of yarn that I dyed myself in... I think 2010? 2011? I got it in my head at some point that I was going to be a yarn dyer, so I amassed a collection of Jacquard dyes, a pot, and a whole bunch of undyed sock yarn. I did six or seven skeins, then totally lost steam for it. I sold a couple on Etsy, traded one on Ravelry, knitted a shawl (only shawl I've ever knitted) with another, and I've got a couple left in my sock yarn stash. When I dyed this skein I think I was going for a peacock-y color scheme, with teals, purples, blues, all dark and jewel tone-y, which it turns out is hard to do. I seriously overdyed this skein about eight times to get what I wanted. Too much. But it's pretty, so there we are. And now it's socks.

I kind of hated knitting the first sock of this pair. The second was a lot easier. Don't know why. I didn't read the pattern very well, so when I read the instruction to make a double decrease, I did slip one-k2tog-pass slipped stitch over instead of slip two together knitwise, knit one, pass slipped stitches over. That leads to a very different looking decrease than what I made, and I'm a bit bummed about it, but you know what? It was a good lesson. Read the pattern before just going off to knit willy-nilly.

I like these socks because they don't sag. Some of my socks sag over the course of the day, but the stitch pattern on these is of the stay-put variety. I like that. 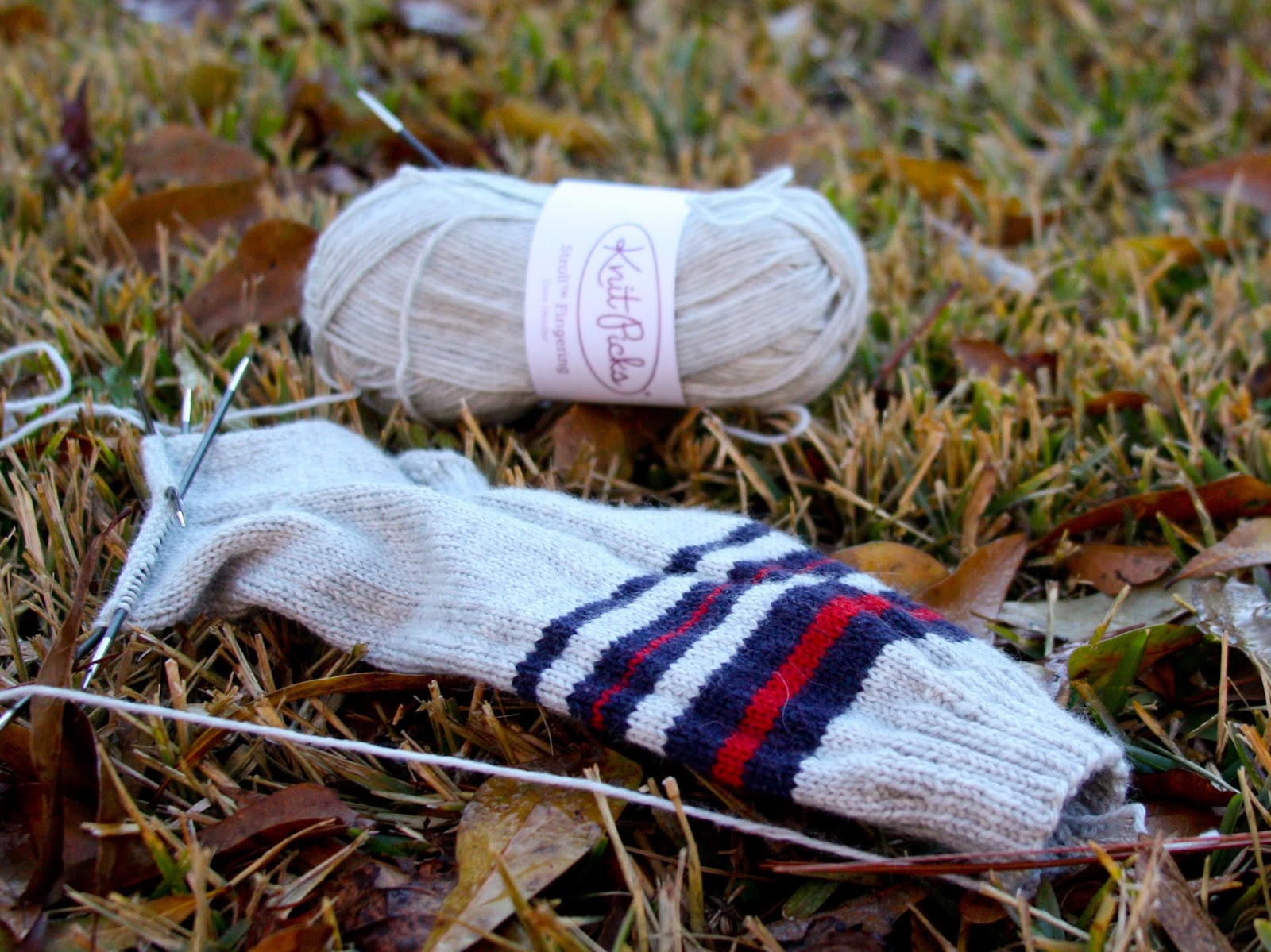 My next pair of socks has a pretty serious deadline: the Superbowl! My beloved Patriots steamrolled the Colts to earn a spot in the game of all games, and no I don't want to talk about the balls. I decided that I'm making Pats socks. I thought about doing something fancy and knitting the logo onto the leg, or the number 12 onto the top of each foot, but in the end I thought simpler is probably better, and I went with an athletic sock look. I'm through the gusset on the first sock, and I've got a week left, so I think it's doable. Go Pats! Yay Tom Brady!
Posted by Emily Ringelman at 6:50 AM No comments:

Thank you to all who entered my naming contest! You guys all had some great ideas, and I wish I could name the cowl like five different things, but I had to pick one: Water Skaters, courtesy of Nancy Jo. Hey Nancy! Send me a message on Ravelry (EmilyRingelman) and I will send you some coupon codes for patterns! So here it is: Water Skaters, a large-scale lace cowl pattern. The lace is both written out and charted, so if you've never knitted from a chart before, you could learn. This pattern is suitable for beginners, but  it's interesting enough for knitters of any skill level.

Yarn: Dream in Color Classy, in the color Punky Fuchsia: 180 or so yards. Use any worsted or aran weight yarn that strikes your fancy.

Size: About 8.5 inches tall and 12 inches across. There are notes in the pattern to guide you in making either a taller cowl or a longer one. 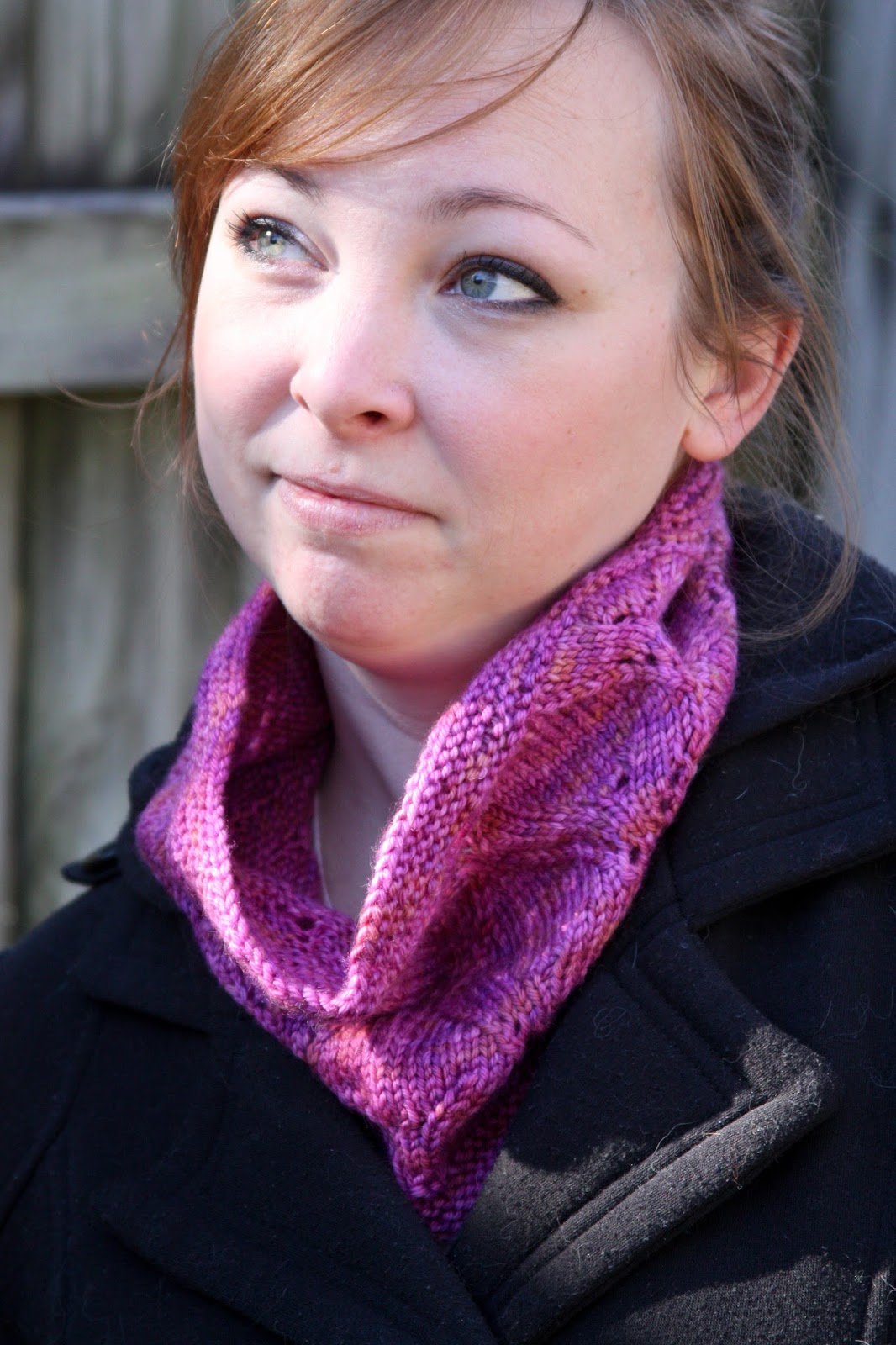 As a new-pattern release celebration, the pattern is 40% off for the rest of January! No coupon code needed, just purchase the pattern on Ravelry for the discount.

Posted by Emily Ringelman at 8:28 AM No comments:

I will freely admit that I suck at naming patterns. Sometimes I get on a streak where I'll name five patterns after town names or something, but for the most part, I'm just not good at it. Can't be good at everything, right? So, after a Twitter conversation with my invisible internet friend, I've decided to try something new. Let's have a naming contest for my newest cowl pattern, with the winner getting a copy of that pattern plus a copy of any other self-published pattern in my Ravelry store, winner's choice. Sound like fun? I thought so, too.

Here's the cowl. It's a large-scale lace thing, with garter stitch edgings. It's pink. I like pink. 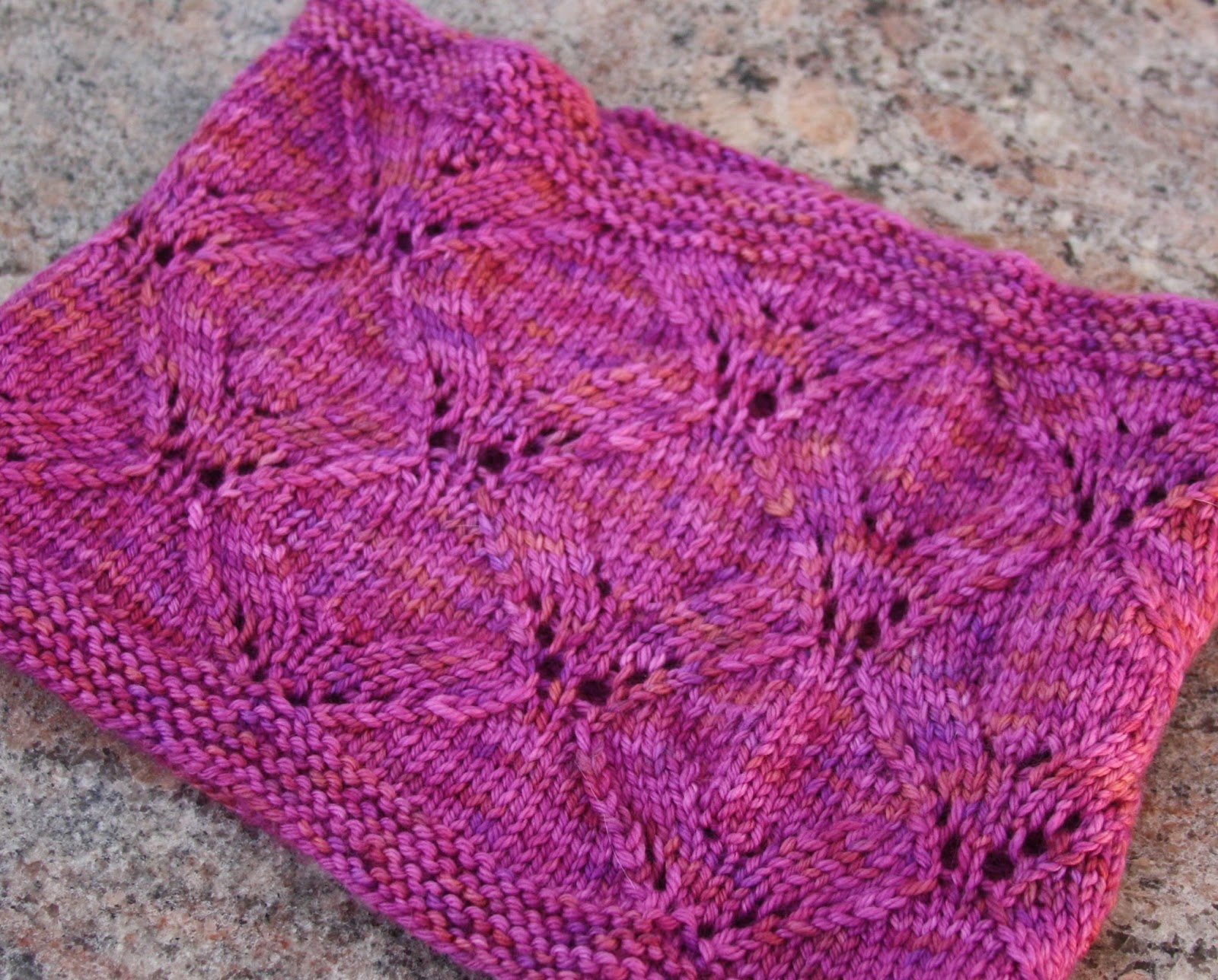 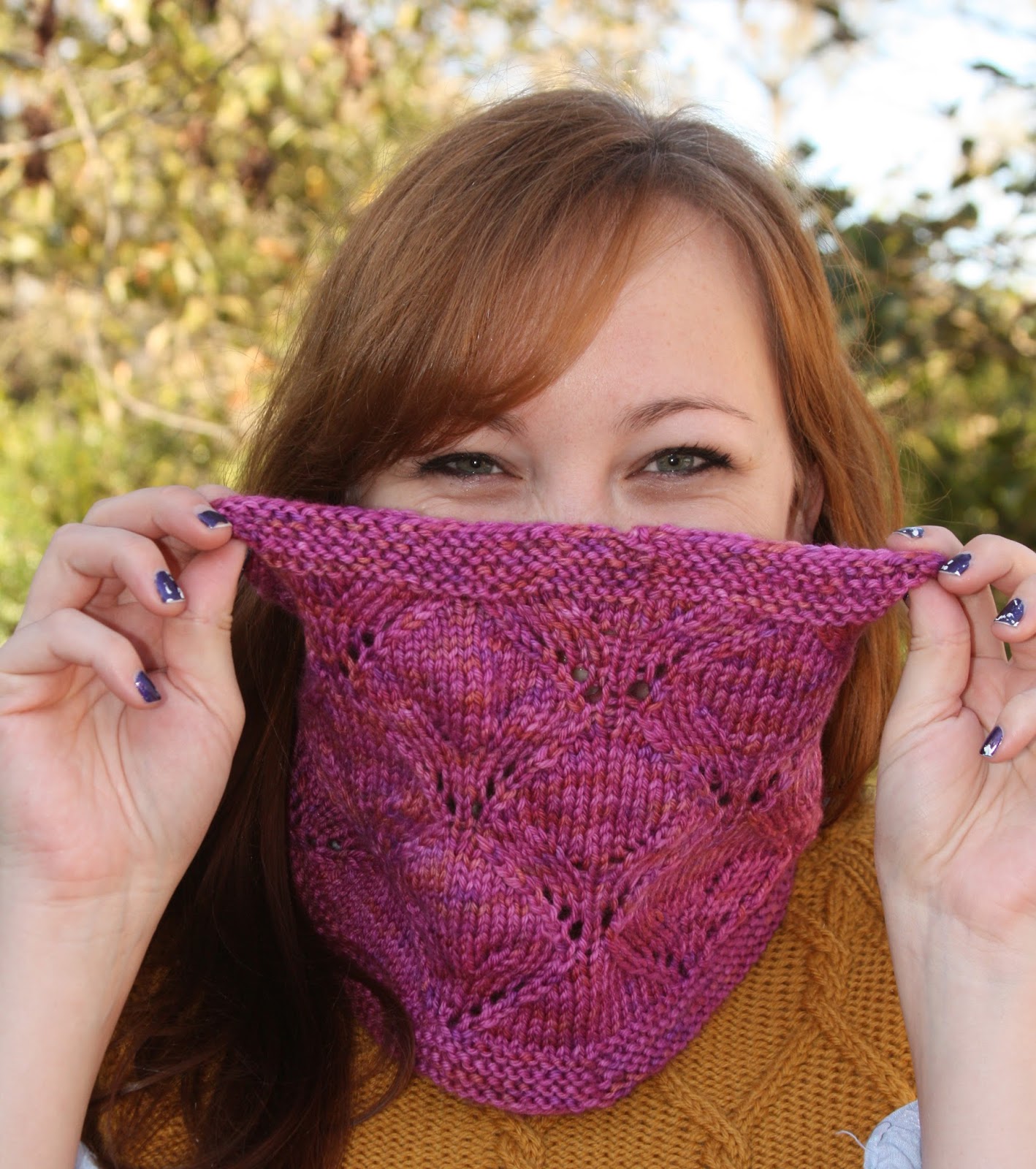 If you have an idea, leave a comment on this post and tell me what you'd name this pattern! You can enter as many times as ideas. I'll pick a winner on Sunday, January 18th, and that person will receive some patterns! I have faith in you all. Surely someone is better than me at names. Good luck!
Posted by Emily Ringelman at 11:10 AM 8 comments:

Slippers and socks, socks and slippers 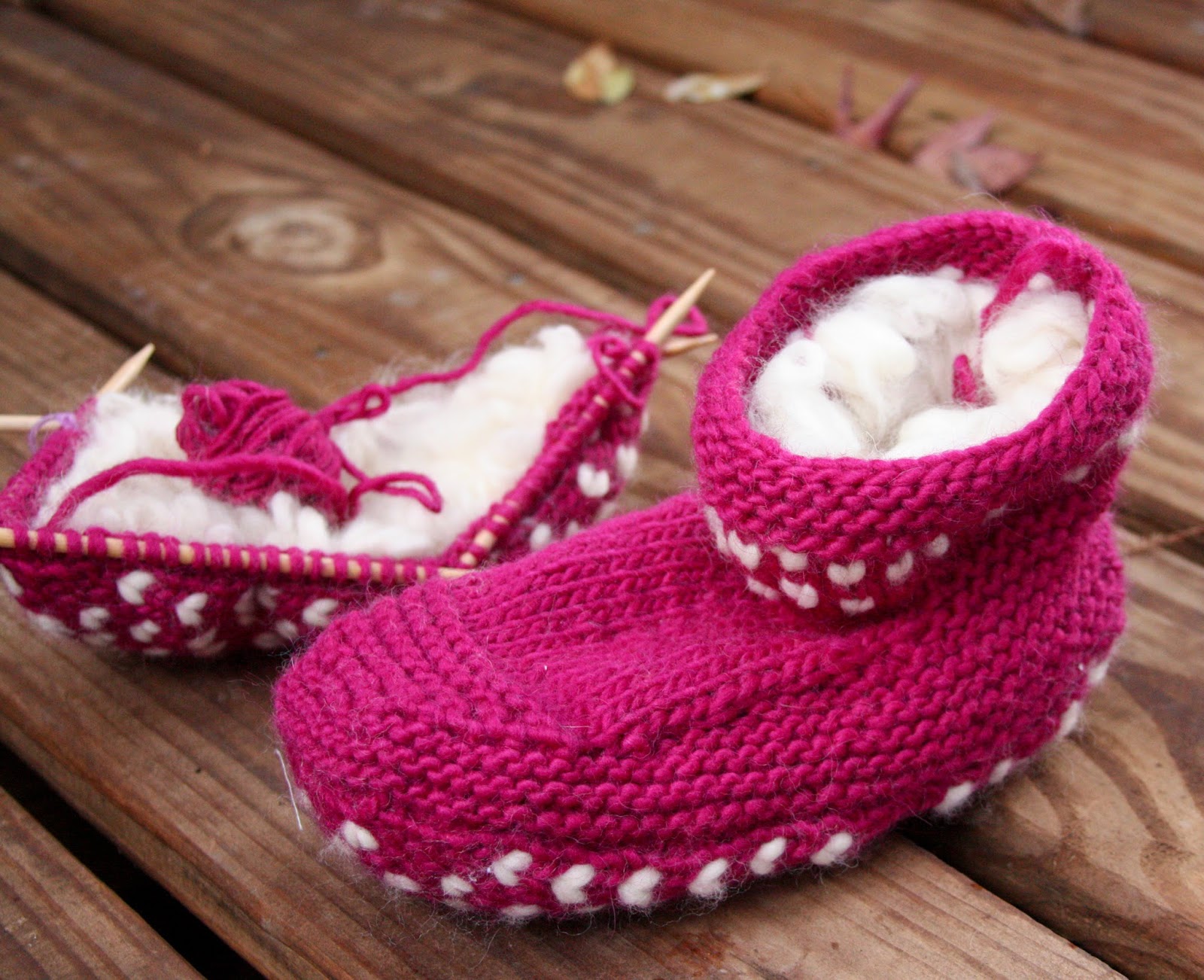 I finished my Christmas knitting on December 22nd, which I think was a first for me. I'm so often knitting a last-minute hat on Christmas Eve, and I hate that. I did a much better job of planning ahead this year, and to reward myself for such good behavior, I cast on for a pair of Ysolda's Cadeautje Slippers on the 23rd. She originally released this pattern as part of a subscription-based pattern collection, with one pattern released every two weeks in the couple months leading up to Christmas. Genius, especially because the patterns weren't available individually until December 15th, which isn't too too late for Christmas knitting, but it's close, so she gets you there. I wish I'd thought of that. 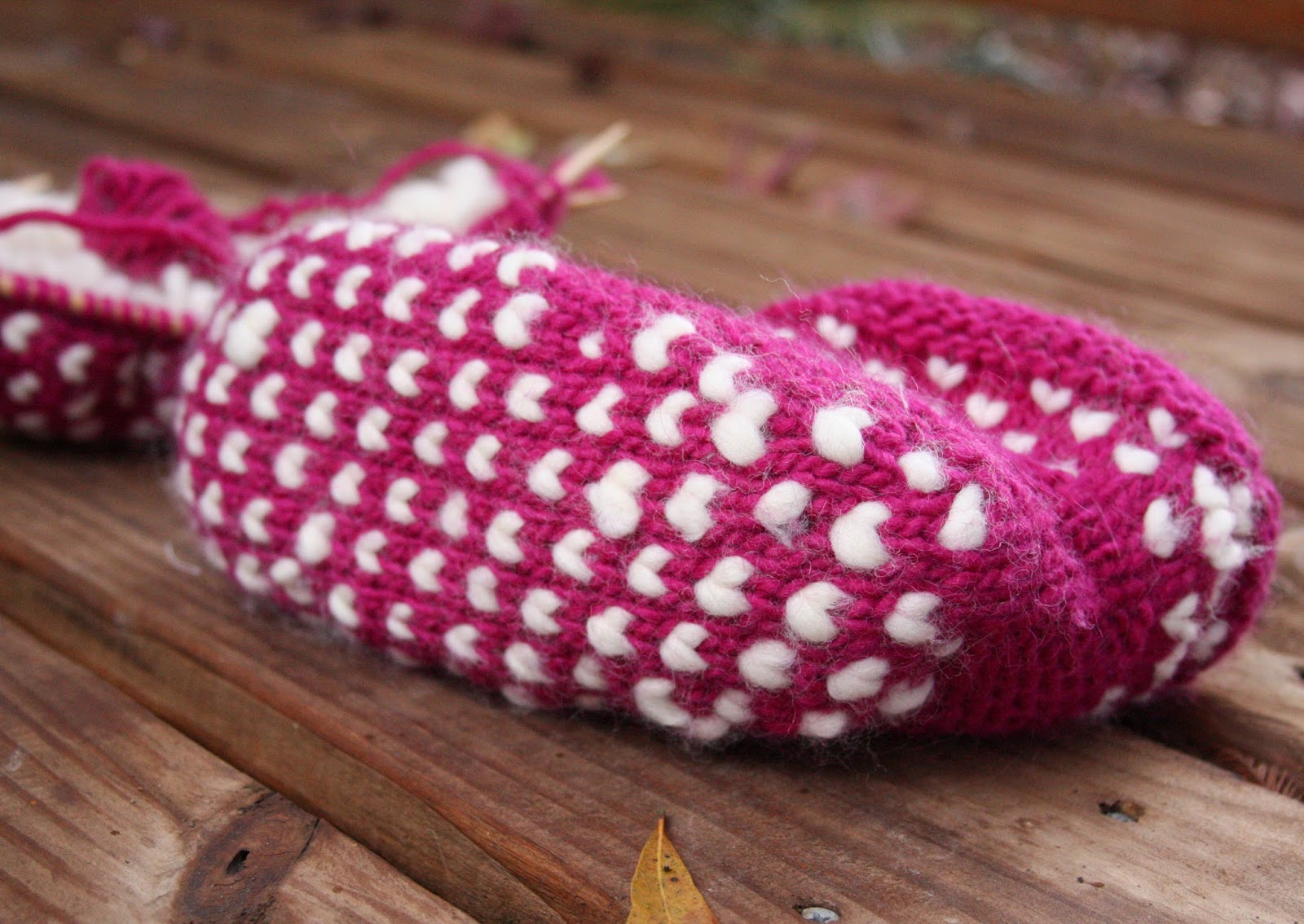 All those white bits are fluff on the inside. Squooshy squooshy fluff.

Anyway, I bought the pattern the second it was available as an individual download, but didn't have time to start until the 23rd. I whipped that first slipper out in two evenings flat. I passed it around the couch for all the visiting relatives to try on, and every single person fell in love. The inside is so wonderfully fluffy and squooshy because they're thrummed, which is a fantastic technique, and I can tell they're going to be so, so warm. I immediately cast on for the second one, knitted the sole, then stalled.

Can I tell you something? Knitting the foot part is a huge, giant, sucky pain in the butt. It's too many stitches for a set of double-points, but the angles are too harsh for a 16" circular, and I don't have a needle long enough to properly magic loop it. I struggled through the first one just because I wanted to make these so badly, but I'm having such a hard time convincing myself to just do it again and knit the second one. I tried last night (using 5 dpns and a 16" circular as a sixth needle... I'm so clever), and got all the way through the toe cap before I realized that I knitted the toe onto the heel. Fun.

While I'm working up the fortitude to just finish the damn slipper I remembered that I knitted one Jaywalker sock a few months ago and put it away in the knitting basket. I'm a fan of matching socks (as I assume most people are, ha), so that one sock isn't doing me any good. I pulled out the project bag and started on the second sock, then got distracted with design work. So now I have one and a partial slippers, and one and a partial socks. This is helpful to no one, so I think I just need to devote some time this week to slippers and socks... which is better said than done when the yarn for 4 sweater designs is calling my name and I really, really want to paint my kitchen, but also I should really be submitted design ideas for some upcoming pubs, and the dishwasher needs unloading yet again. Life! So busy. Not enough time to sit and knit something just for fun. 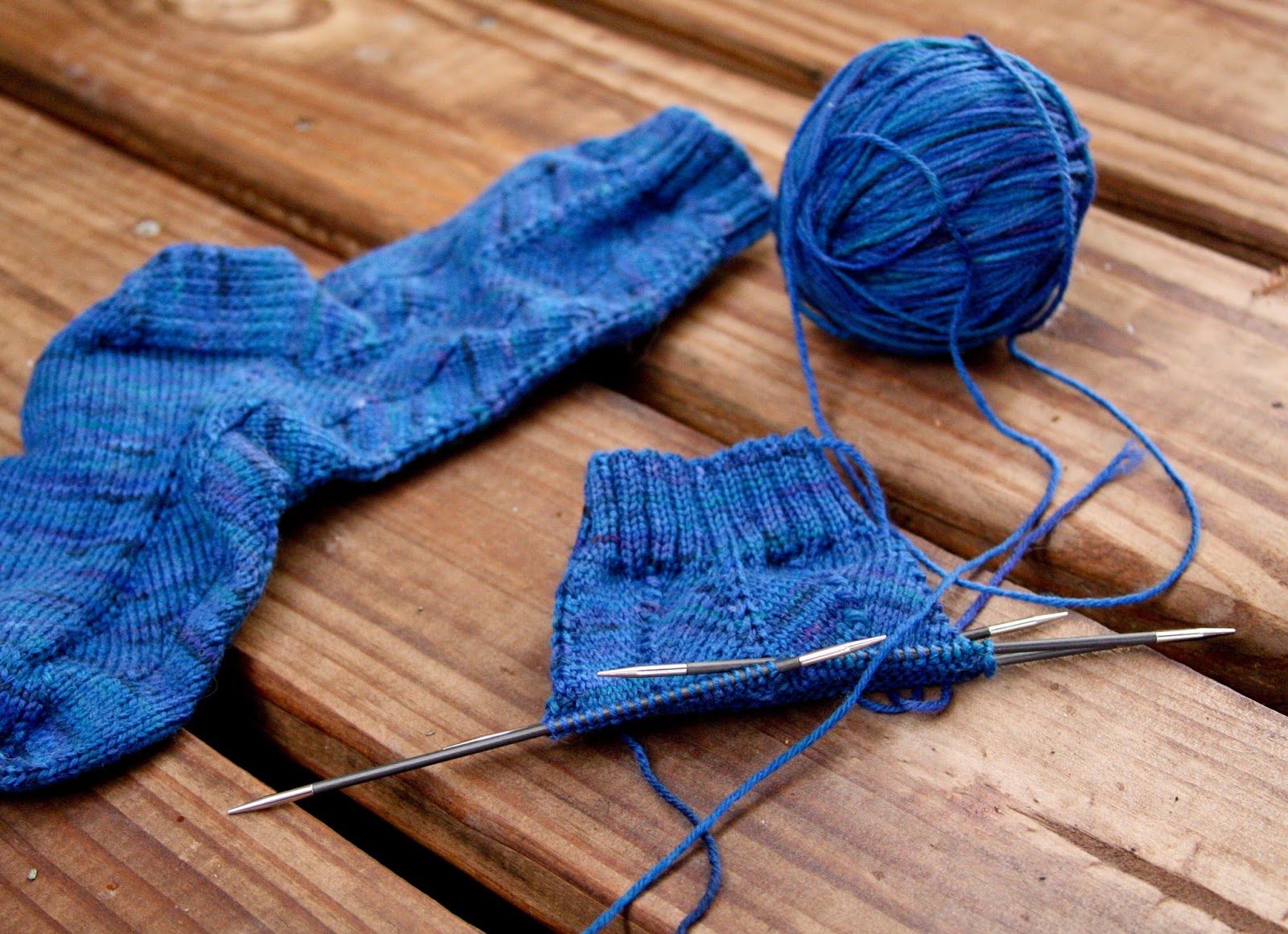 So here's to finishing my first pair of socks in 2015, and sticking my cold tootsies into those fluffy slippers.
Posted by Emily Ringelman at 1:32 PM No comments: