Finally getting to start my lace-back Vogue sweater + sunshine + coffee = 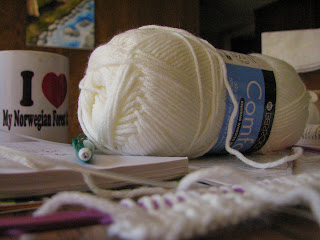 happy.
Posted by Emily Ringelman at 2:31 PM No comments:

Possibly the most cheerful socks ever 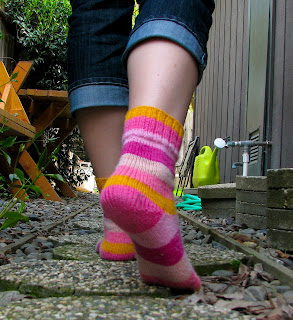 I definitely knitted these when I was supposed to be knitting other things, but they make me happy, so I don't care. Plus, they were super quick. I think I made each sock in two sittings. That's the great thing about self-striping yarn; it does all the work, and you just zoom around in stockinette. Especially if you have Addi Lace Turbos, like I do. It changed my sock knitting world, people, getting those needles. I loves them. 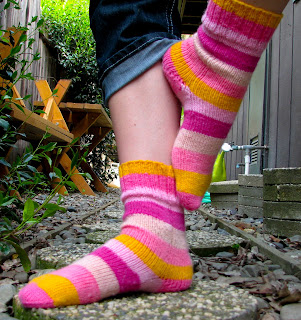 They are made from about 1.5 skeins of Knit Picks Felici in "Peachy". Just a simple cuff-down sock with short-row heels and a really shallow toe, because I have, as my husband likes to say, troll toes that kind of just go straight across. I had a moderately hard time making sure the stripes matched, because when I was looking for another orange section, the second skein was mostly yarn barf. I hate that. 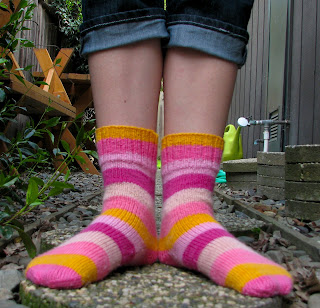 I got to wear them once. Now it's too warm for socks, especially wool ones. A little frustrating for now, but I bet when fall comes around, I will be stoked. A drawer full of hand-knit socks? Yes please.
Posted by Emily Ringelman at 5:18 PM No comments:

I finished this awhile ago, but we had a cold snap, and I didn't like the way the sweater looked over long sleeves, but it was too cold to wear with short sleeves.... so it didn't get worn. But now, it's warm enough. 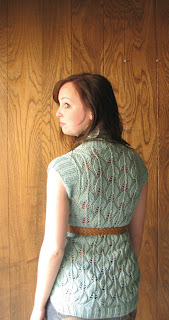 It's from the first Vogue Knitting I ever got, the one from Spring 2011. It's simply called #28 Lace Cardi. It's pretty much just a back of a sweater. Doesn't cover my front in any way. I think it would have, had I followed the pattern and kept increasing when it said to, but the sweater looked so big to me that I stopped increasing early, and now I regret. It was remarkably fast to knit- I think I did it in about a week, during which time I even had houseguests. I used some yarn I already had in my stash for this sweater, which was very satisfying. It's Bamboo Ewe, which is actually much nicer than I thought it would be, being from Michael's and all. Yes, yes, that's a yarn-snobby thing to say. Don't care.

So overall, we'll call it a moderate success.
Posted by Emily Ringelman at 1:46 PM No comments:

I knitted some nautical stuff, because I was apparently supposed to be born in Cape Cod or something, and I wrote up the patterns. There are three: the Yacht Club Scarf, the Captain's Mitts, and the Sailor Slouch. They come as one PDF pattern. 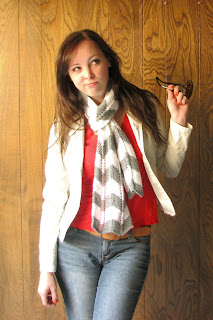 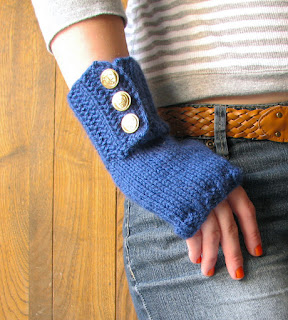 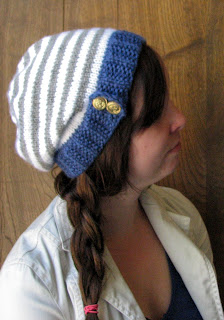 Posted by Emily Ringelman at 2:27 PM No comments: