Awhile ago, I posted a picture of a sample that I had totally finished, but wasn't going to publish because a) the yarn I used was just awful and I'd have to make a new sample, and b) there was a negative percent chance that I could write a cohesive pattern that would make the stripes across the shoulders line up for more than one size. So I scrapped the whole project and added the sample to my box of Things That Didn't Work Out. It's kind of a big box. But then... it came to me. How to make it work. Thanks to Emma Welford for a little kick in the pants that ignited my creativity spark. A box of yarn arrived on my stoop, and off we went. 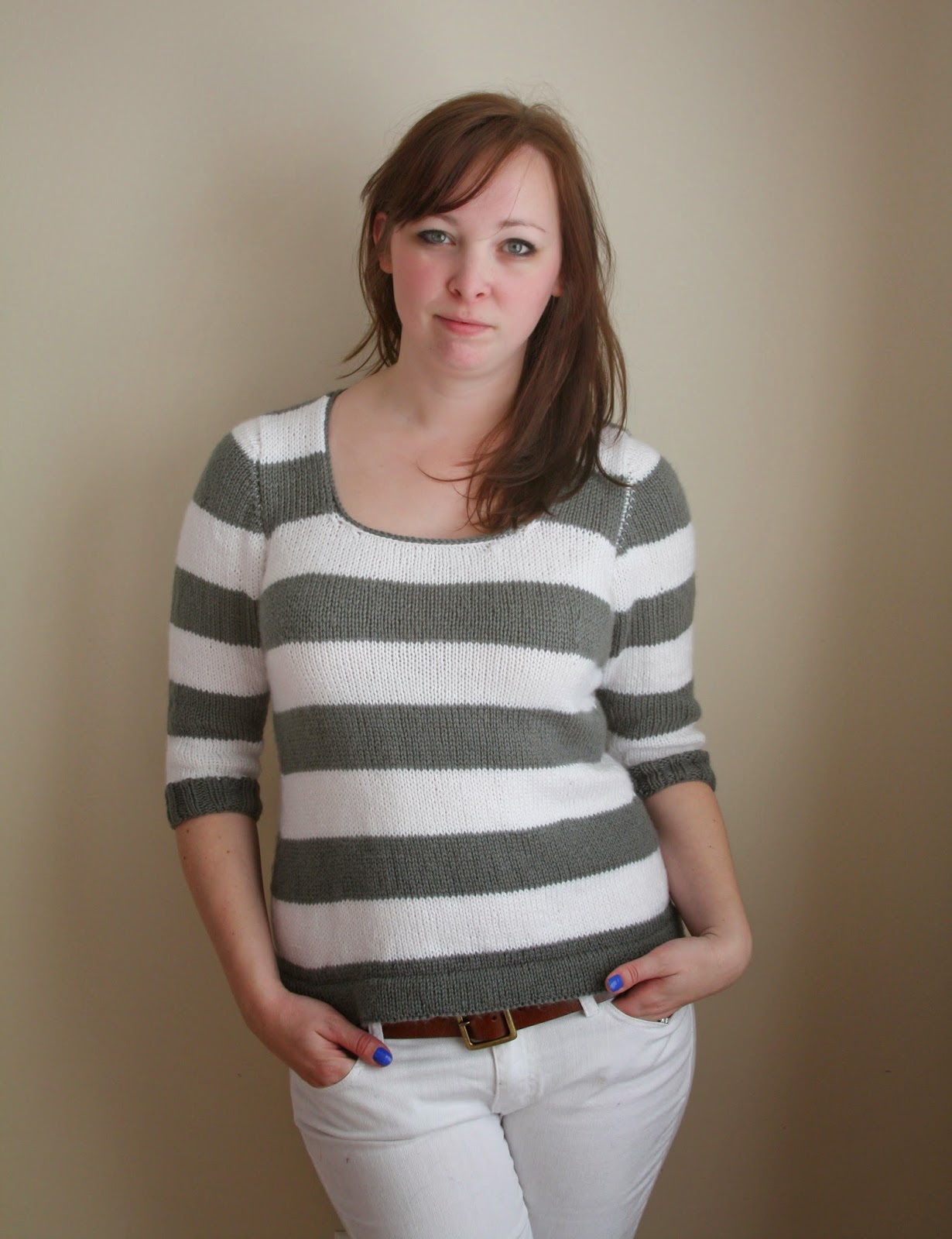 This sweater. Perhaps you remember.

Earlier this spring/winter, when I had a terrible case of the Finish Every WIP in This Dang House, I found this sweater, worked bottom-up to about the armholes, still on the needles. I think the original plan (like 3 years ago, when I started it) was to be a tank top? Or maybe a t-shirt? I seriously don't remember. Whatever it was, it wasn't going to work out. I know way more about knitting than I did then, thank goodness. So a 3/4 sleeve sweater it is.

For reasons best known to no one, I was using acrylic from Joann's. Yes, it's soft, but ugh, a good sweater it does not make. I finagled myself a box of Cascade 220 Superwash, a yarn I loves for it's softness, pretty colors, and durability. So- better sample with totally different construction method, here we come! 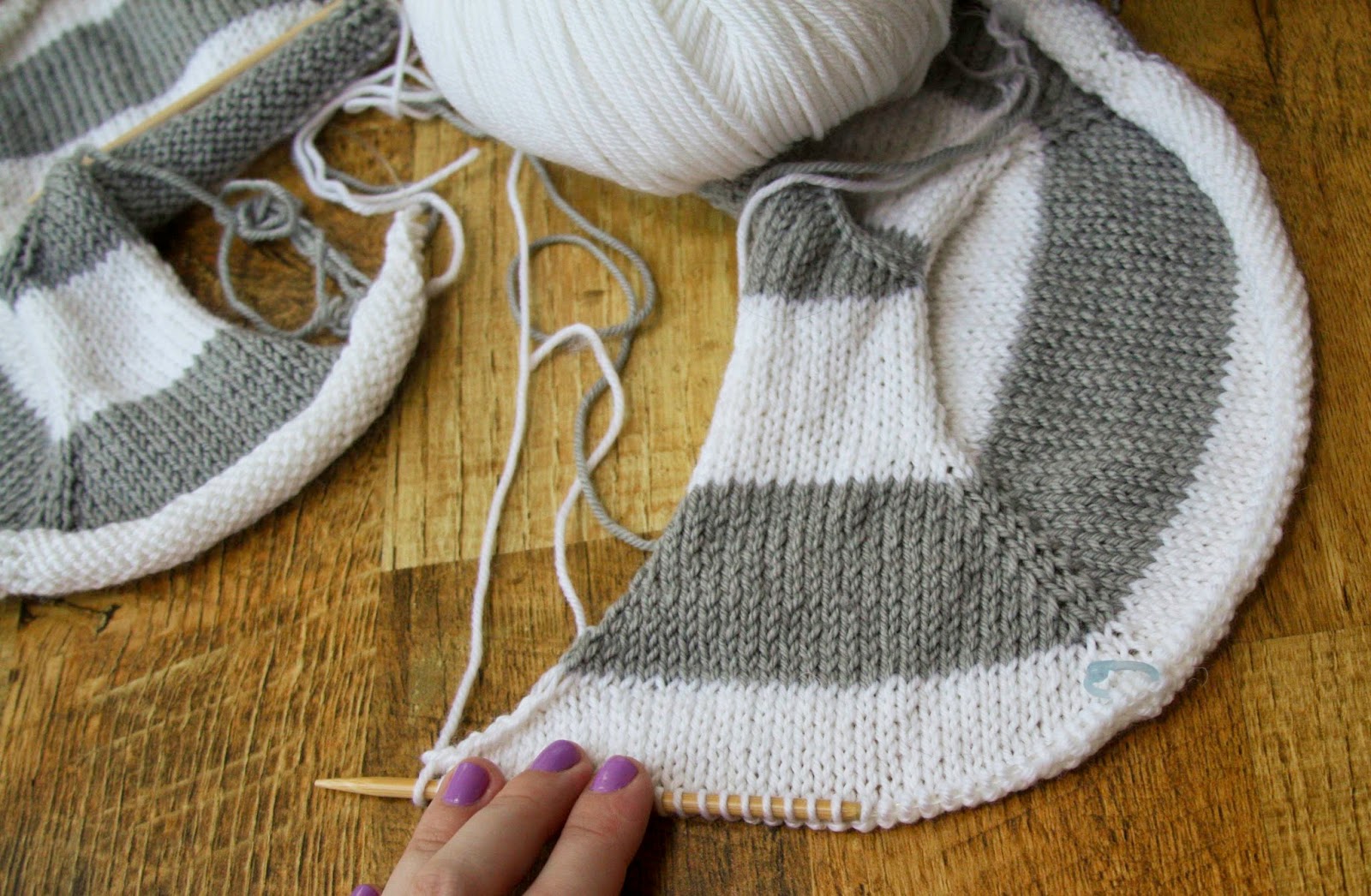 Construction for this sweater is slightly odd, but I think that might just be what I do. Slightly odd. It uses the Contiguous Method, which is sheer genius and makes a shoulder "seam" and what looks like a set-in sleeve. Pretty nifty. So for this sweater, you're actually going to start with just one shoulder, then you separately make the other shoulder, then you join that business together across the fronts to form the neckline. This way the stripes line up on the body and sleeves for every size, with no crazy maths. "Why, oh why, are you making this in two pieces, you weirdo?" you may be asking. I'm making two shoulders because the back has a super fun keyhole. 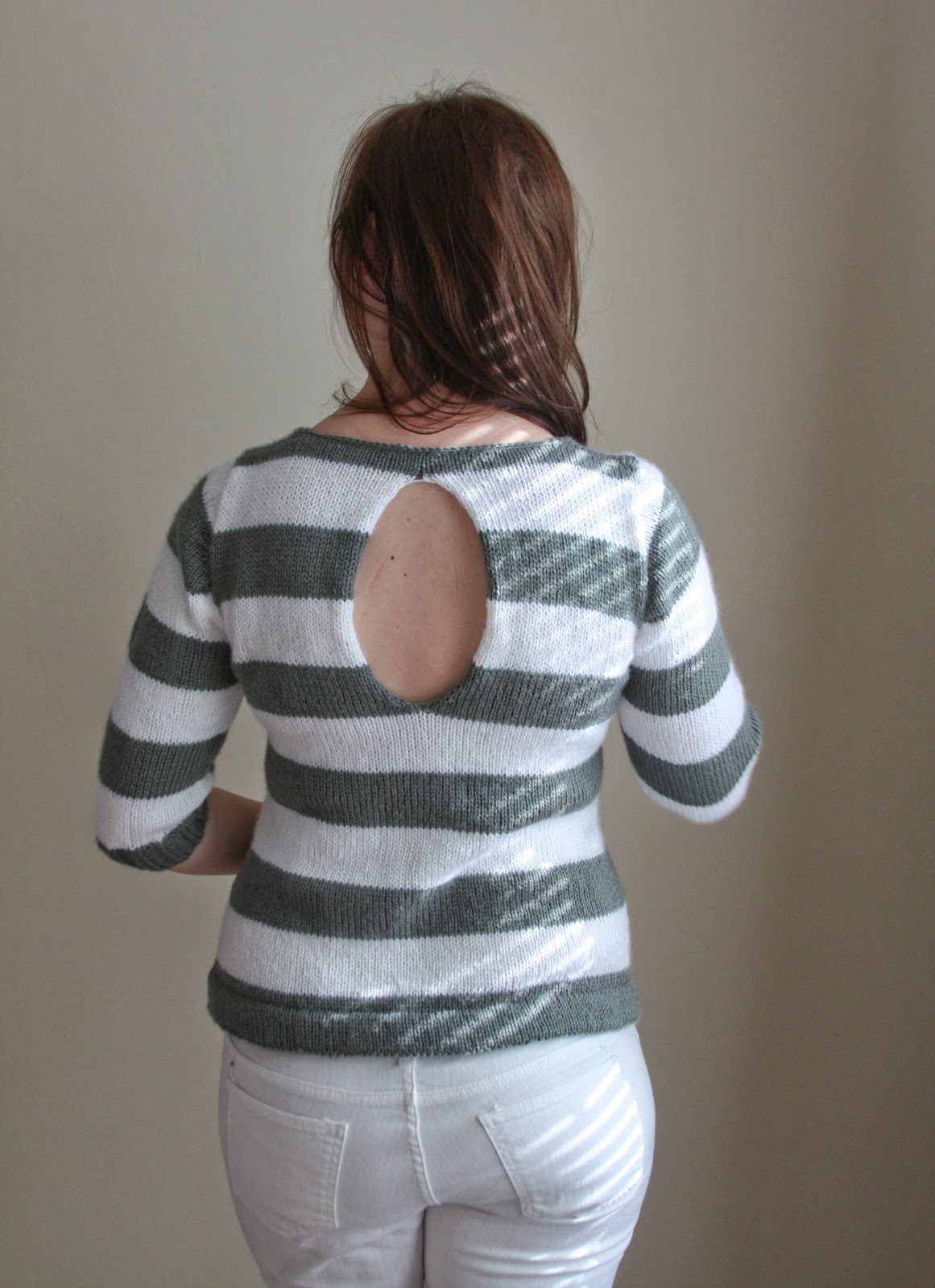 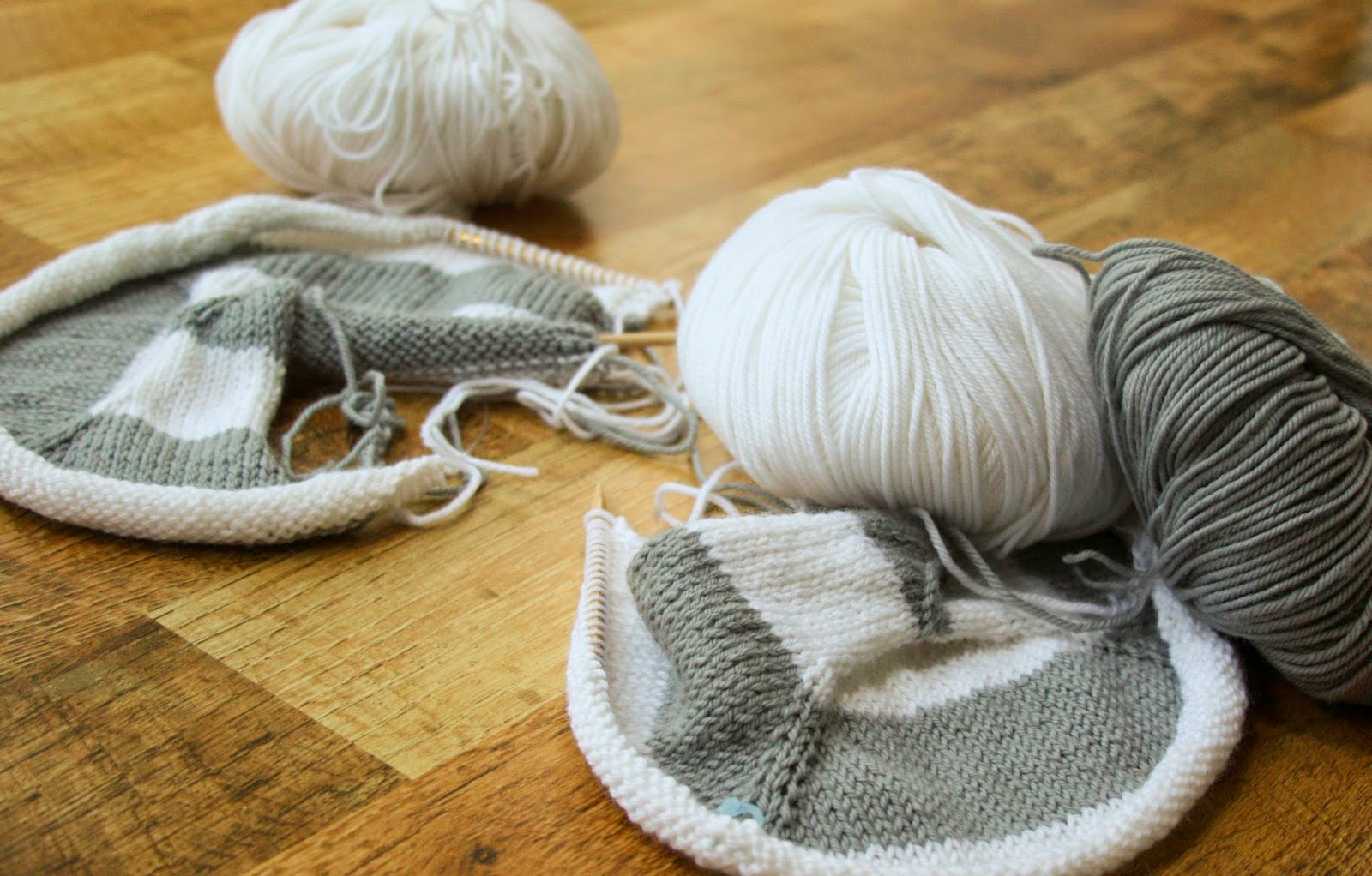 If this looks oddly like two shoulders that are not joined to anything, then well, that's what it is. But I'm just about to join the two pieces together, then it's only about an inch or two to the body/sleeve divide, then smooth sailing from there.

Posted by Emily Ringelman at 9:17 AM 2 comments:

I just realized a horrible thing: I did not blog about the pattern I wrote for a knitted sword. Yes, a sword. I actually designed this terrific fairy tale kids' toy last summer, and it was supposed to be in a beautiful knitting magazine for kids patterns that unfortunately went kaput right before my issue was supposed to be published. I was sort of devastated. I also designed a knight tunic to go with the sword and it's just been sitting in my sewing room because I have no child to model it. Someday I will find a child of the appropriate size. Luckily I have this larger-sized knight to play with the sword for photos. 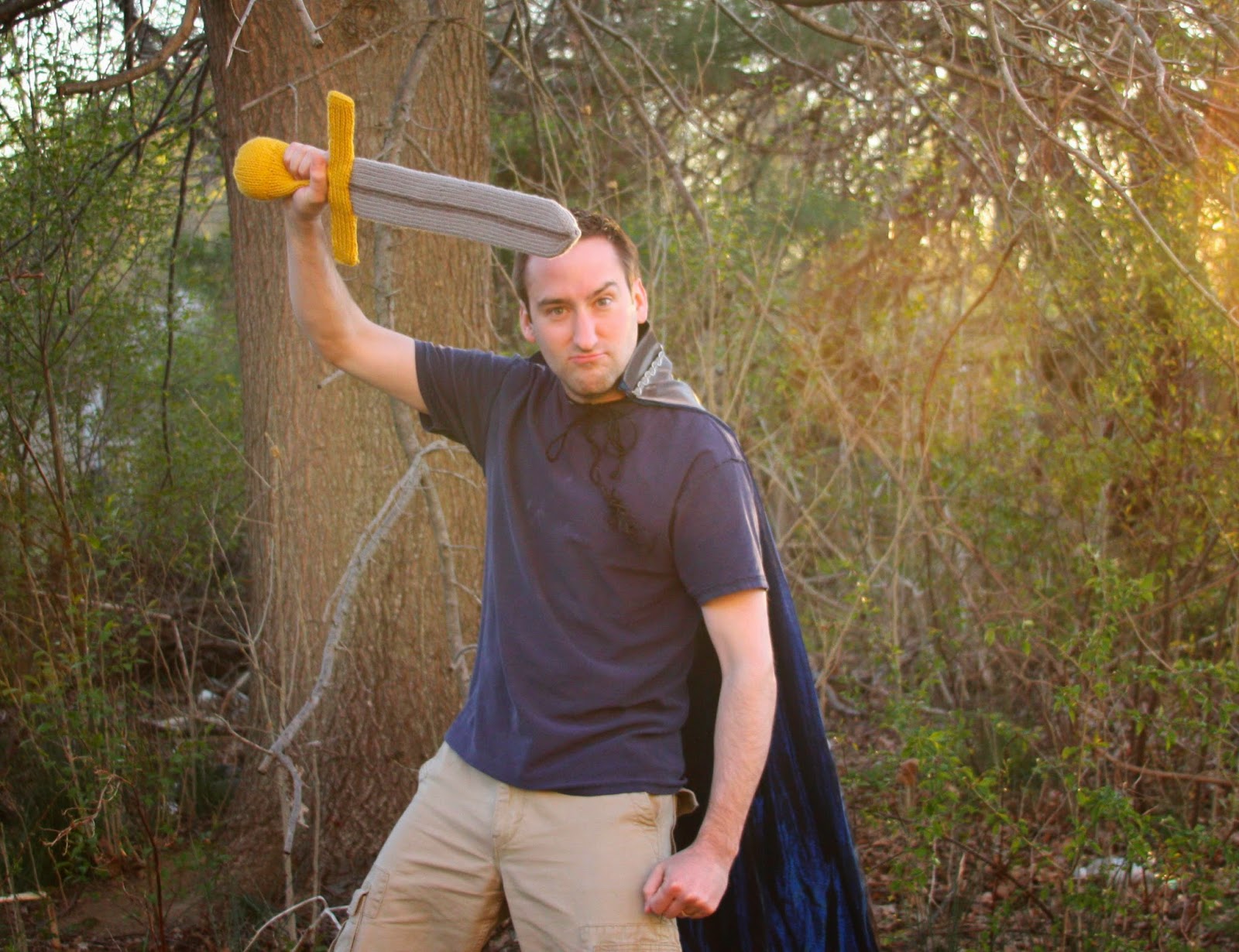 This is Woolbringer, a valiant weapon coveted by young knights everywhere! It's knitted from Wool of the Andes Bulky in a light gray, darker gray, and gold. The hilt of one's sword must always be gold, do we not agree? (And can we also agree that my husband is a master of naming things? "Woolbringer" is genius.) 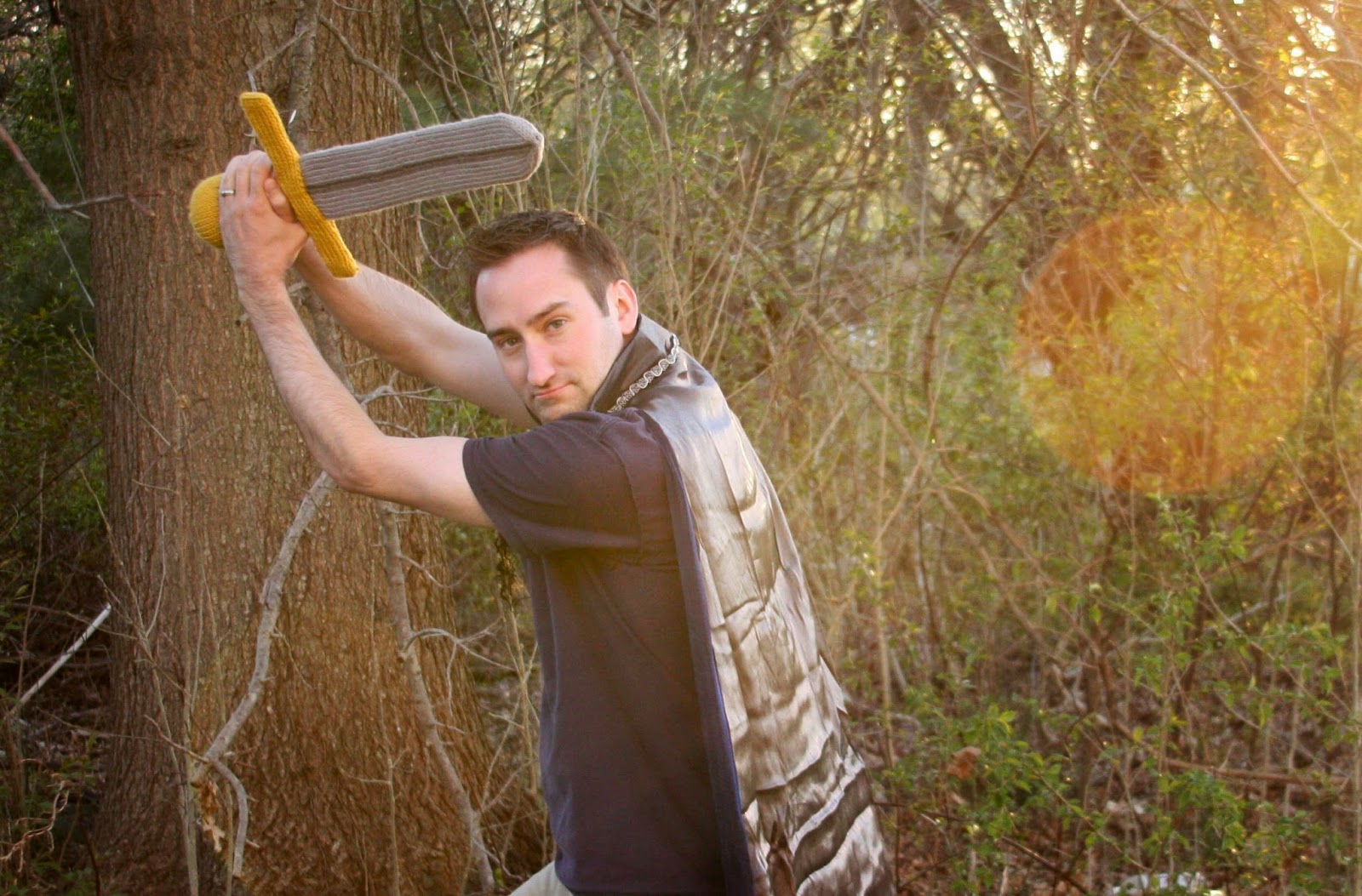 The internal structure is cardboard, paint stir sticks that I may or may not have swiped from HomeDepot, and tape. 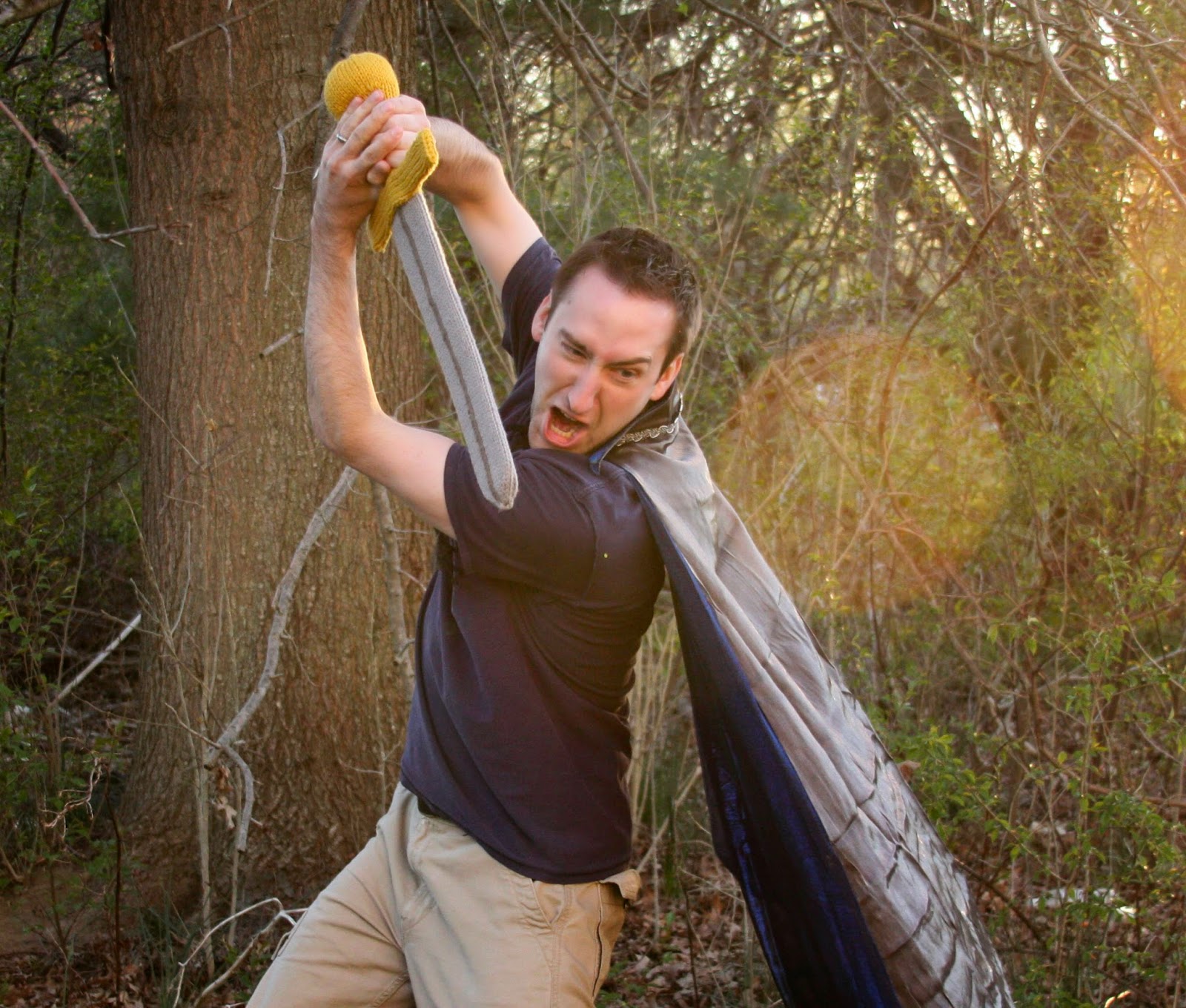 My husband had entirely too much fun with this photoshoot. 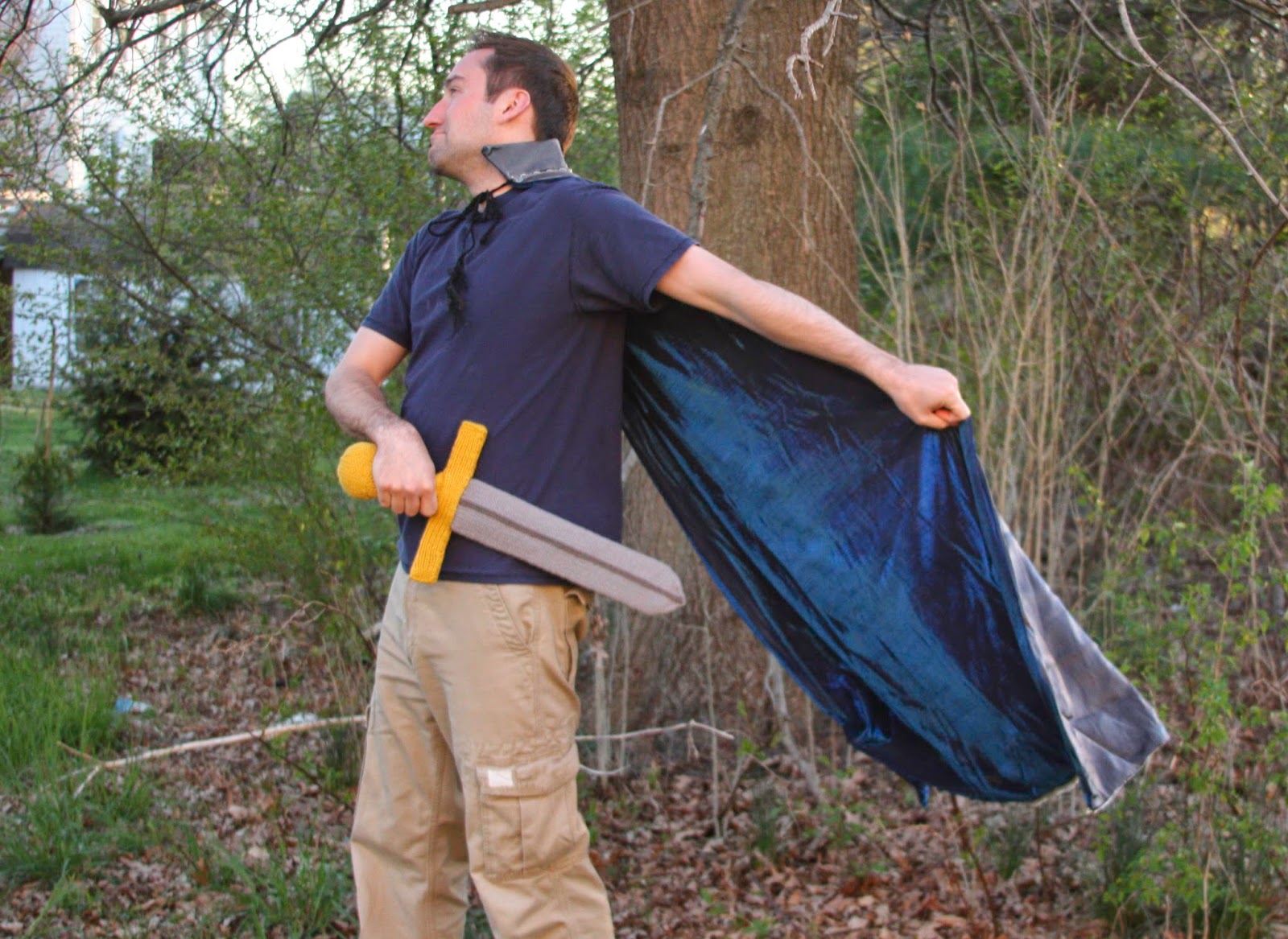 Would your little knight like his own Woolbringer? (The answer is most certainly "yes", but it's more of a question of "do you want to probably get smacked with a knitted sword 18 times and have the kid chase the cat around and stab the couch and definitely terrorize the neighbor girl," and the answer to that may well be "no". But it's funny!)

And back to sewing!

Awhile ago I told you about the Perfect Pattern Parcel and how I thought it was awesome. If you do not recall, a quick recap. It was a collection of 5 indie patterns grouped together for sale, with some of the proceeds benefiting charity. Of the 5 patterns, the first one I made was the Lady Skater Dress, and I totally learned what all the fuss was about. I freaking love that dress and I wear it all the time. I just bought fabric to make another despite trying very very hard to sew down my fabric stash before we move. The Ava dress and top pattern by Victory Patterns was also included in the parcel and was sort of the catalyst that got me to buy. I wanted the Skater dress for sure, but having the Ava pattern bundled with it sort of sealed the deal. 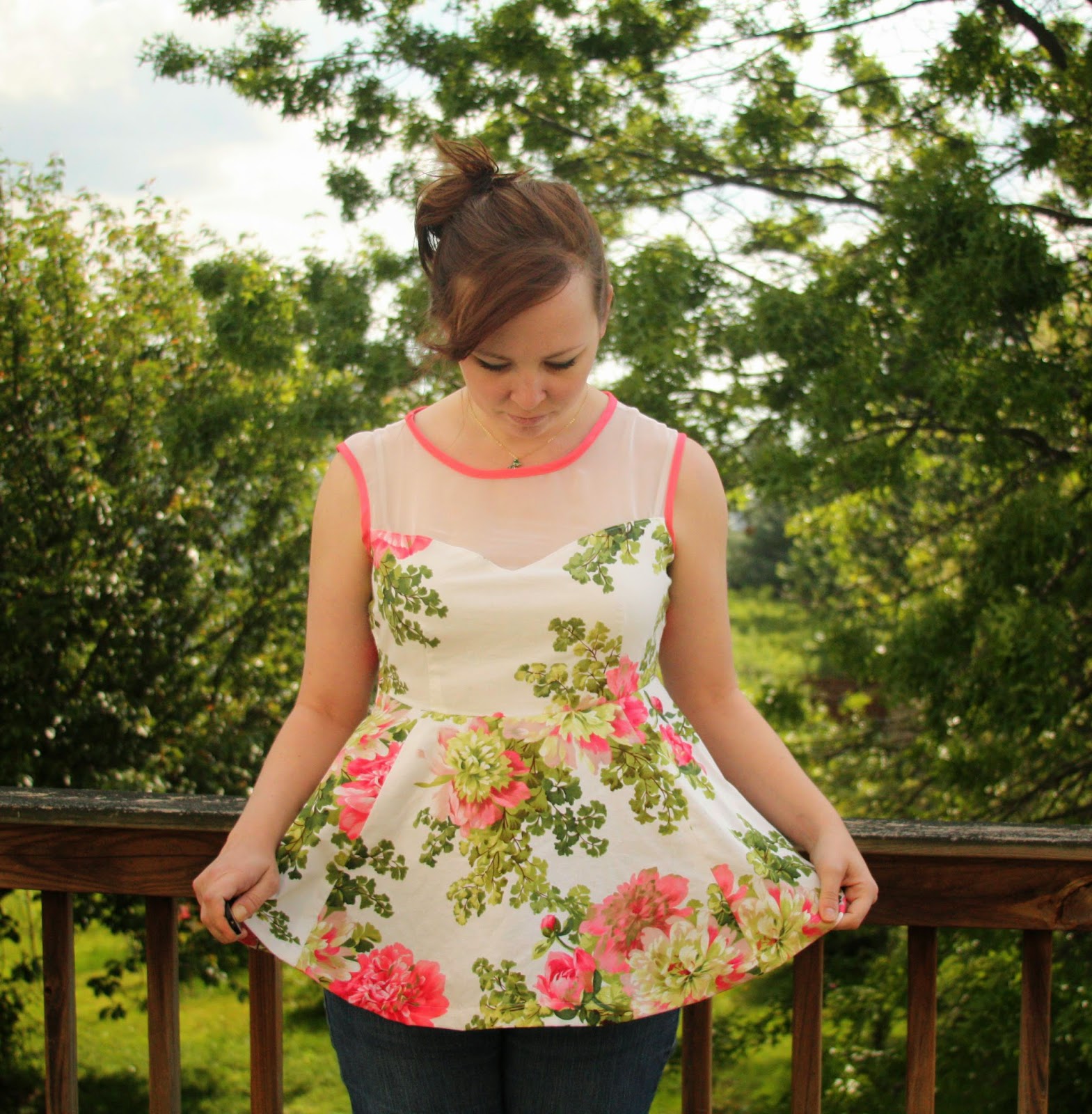 This thing is one of the hardest things I've ever sewn. I don't know why; it's not THAT complicated. But it literally took me 6 weeks when I finish most sewing projects in about 2 days. I think I used just about every sewing machine foot I own. Zipper foot, edge stitch foot, regular foot, bias-tape-application foot (which I had to buy specifically to finish this dang shirt)... and probably more that I am now forgetting. Although- take a look at that bias binding! Looks good, eh? I was really pleased with the result of that bias tape foot. 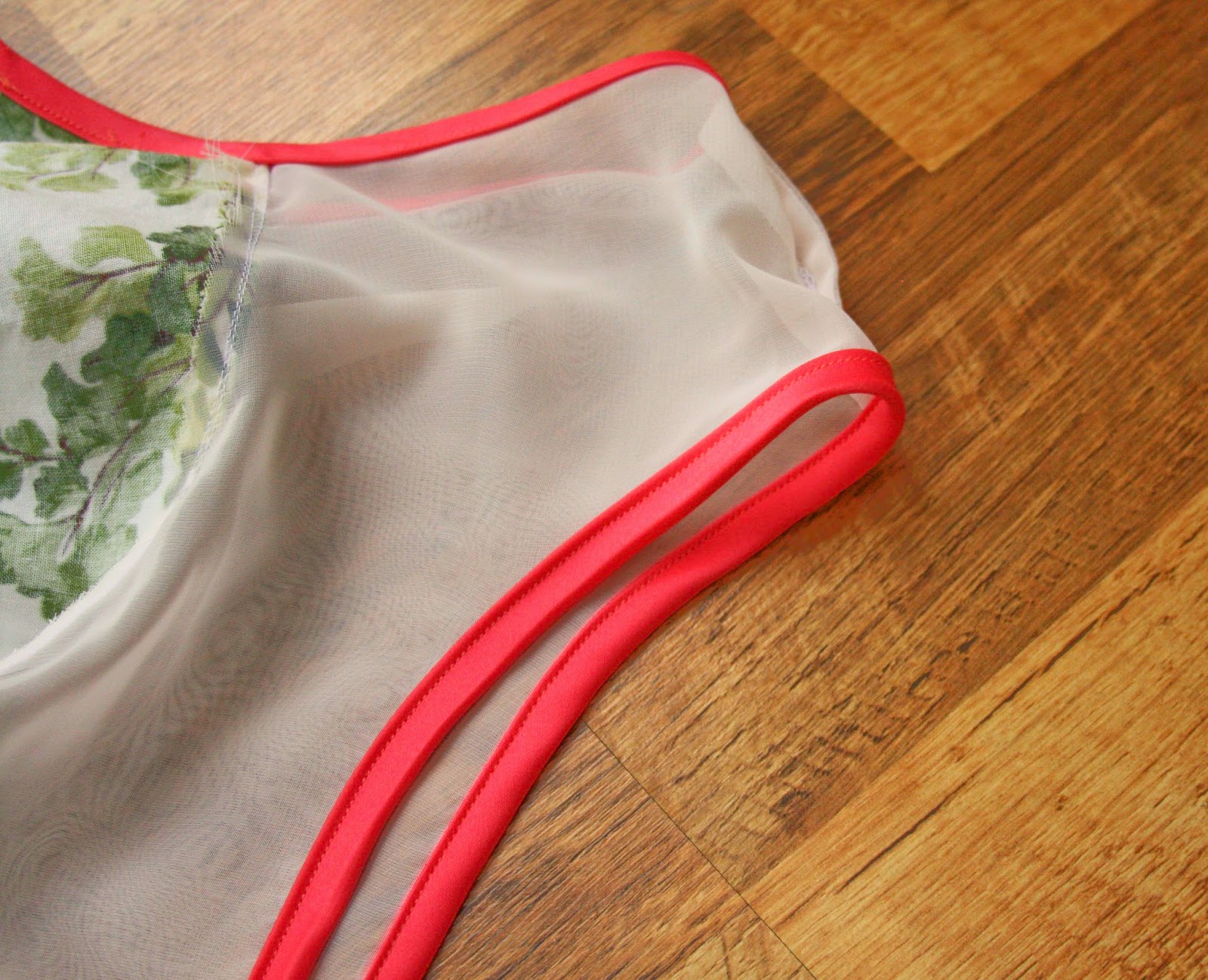 (This is the inside. Look at that bias tape application!)

The floral fabric is something I bought in a Sacramento quilt shop in 2010. Yeah. I didn't buy enough to make a dress, and I thought it was too pretty to be a quilt, so I've been saving it for the right pattern for a long time. I actually think the fabric is too heavy for this pattern; it stands out A LOT at the hem. If I were to make it again I would definitely pick something with a lot more drape.

The sheer is something I've had in my stash for who knows how long, and let me tell you: it was a nightmare to work with. I literally balled it up and tossed it in the trash once, went to Joann's to find something else, found nothing, came home, and had to un-ball it up and figure out how to best make it work. Tons of pins and pattern weights/rotary cutter when cutting turned out to be the answer. But really, ugh. I frenched the shoulder seams and they are not that good. Hopefully no one looks too closely. 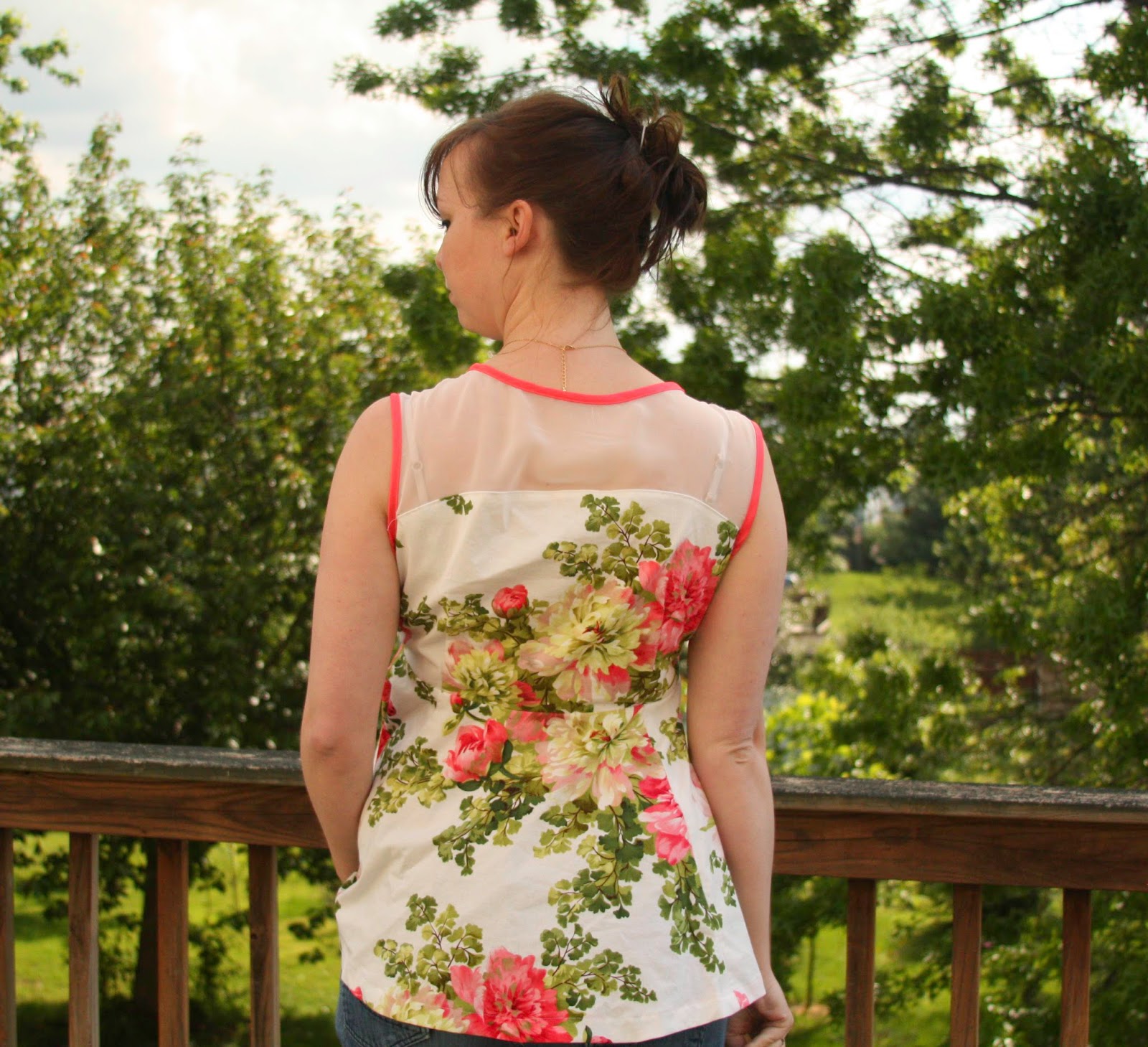 I didn't bother with print matching. Didn't have enough fabric. I did, however, trace all pattern pieces that said "cut on fold" to make them NOT cut on fold pieces, (explanation) which I think saves fabric and allows for better print placement. I did not want a great big flower over my bust. I made a straight size 8 and had a really good fit out of the envelope. The waist seam could be closer fitting, but there is a zipper there and I'm not taking it out to make the thing smaller. I will live with it. 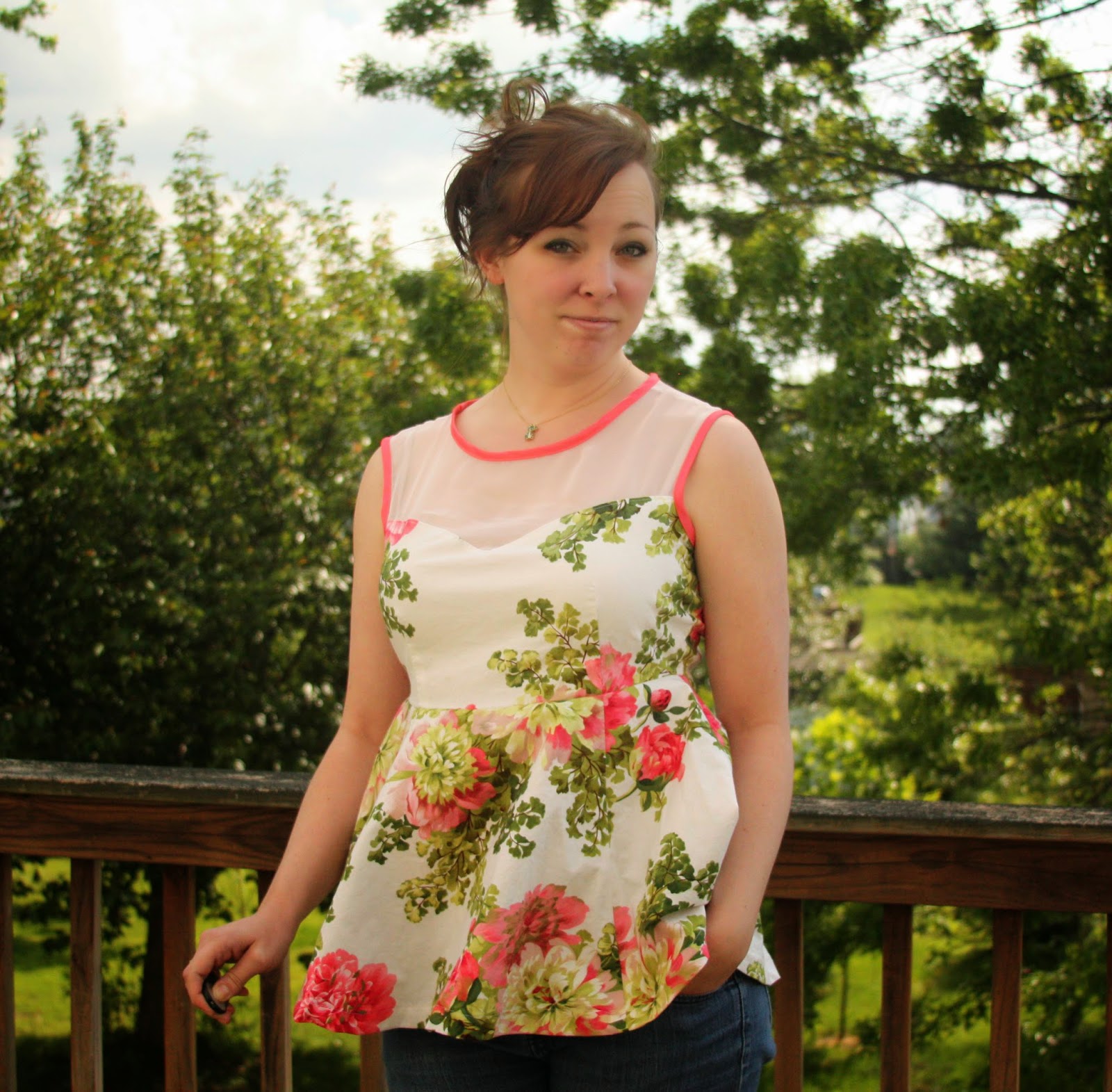 One thing I had serious trouble with is the bias binding that was supposed to go around the sweetheart neckline. I could not understand the instructions, and there hasn't been a sew-along, so no photos online, so I abandoned that endeavor and did what I felt was right: I just sewed the sheer part to the floral part and top-stitched. Done!

Overall I like this top. It's definitely a nicer top, which I need more of. But it was a bit of pain to make, especially using sheer slippery fabric. It's pretty! That's for sure.


Posted by Emily Ringelman at 8:30 AM No comments: 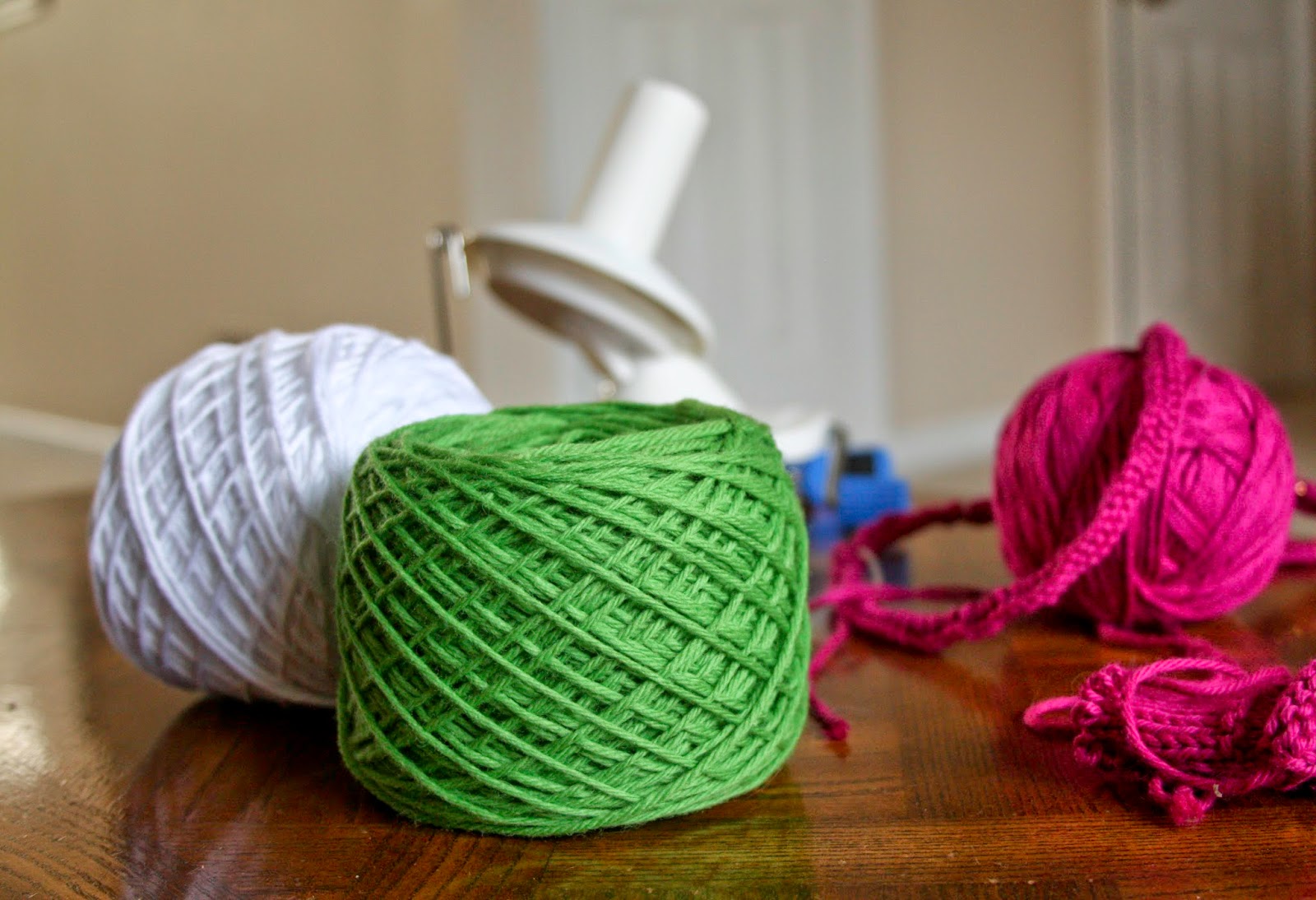 1. I got a ball winder for my birthday. There's a learning curve, it turns out. Also, I have no swift, so I had to have my husband sit by me with his hands out, holding the yarn... it did not go well. One ball ended with me saying, "Ok, just give me the yarn. Give it!" Then I had it draped over my knees, trying to wind it from both ends to figure out what had gone so terribly wrong, and why the loop was sort of twisted and folded over on itself. "Hold the yarn," that's all I said to do. Sigh.

2. Speaking of husbands, mine got a job as a professor at LSU in Baton Rouge for this coming fall. Does anyone know any good alligator repellents? I want to spray some on our new yard.

3. Moving to Louisiana will round out our "Regions of the country we've lived in" map: Started in the Midwest, moved to New York for college, then to California for a PhD, and now we live in Delaware, so the South will pretty much complete that journey. (I recognize we have not lived in the Southwest, but I'm ignoring that region for reasons of hot desert, snakes, and Arizona.)

4. I am fairly certain from watching HBO smutty TV that all of the vampires live in Louisiana. Yes?

5. Changing topics entirely, I have several designs coming out this summer/fall that I'm super excited about, so keep an eye on this blog and I'll tell you about them when they come out! Or possibly, you'll see them before I get around to blogging about it. That could totally happen because I'll be too busy trying to buy a house in a place I've never even visited, or perhaps I'll be mixing up gator repellents in my garage. You never know.
Posted by Emily Ringelman at 1:45 PM 1 comment:

Yet another new pattern

Unexpected radio silence over here! Life has been absolutely nuts this past month. Plus, I've only been knitting things that I'm not yet allowed to show on the interwebs. Seriously. That's a thing. Tons of knitting, no blogging.

But! I published yet another pattern last week. This is the Bellefonte Cardigan, an entirely out-of-season cozy blanket-type cardigan. It's knitted in what may in fact by my favorite yarn of all time: Dream in Color Classy. I knitted my sample in only 7 days because I loved the yarn so much. When it came in the mail, I pulled it all out of the box and just sat on my couch hugging it. My husband walked into the room and was like, um. Are you hugging that yarn? Yes. Yes I am.

As an aside, I am continuing with my trend of naming patterns after places in Delaware. Bellefonte is a town in Northern Delaware. I find all of these names from a list on Wikipedia. Seriously. 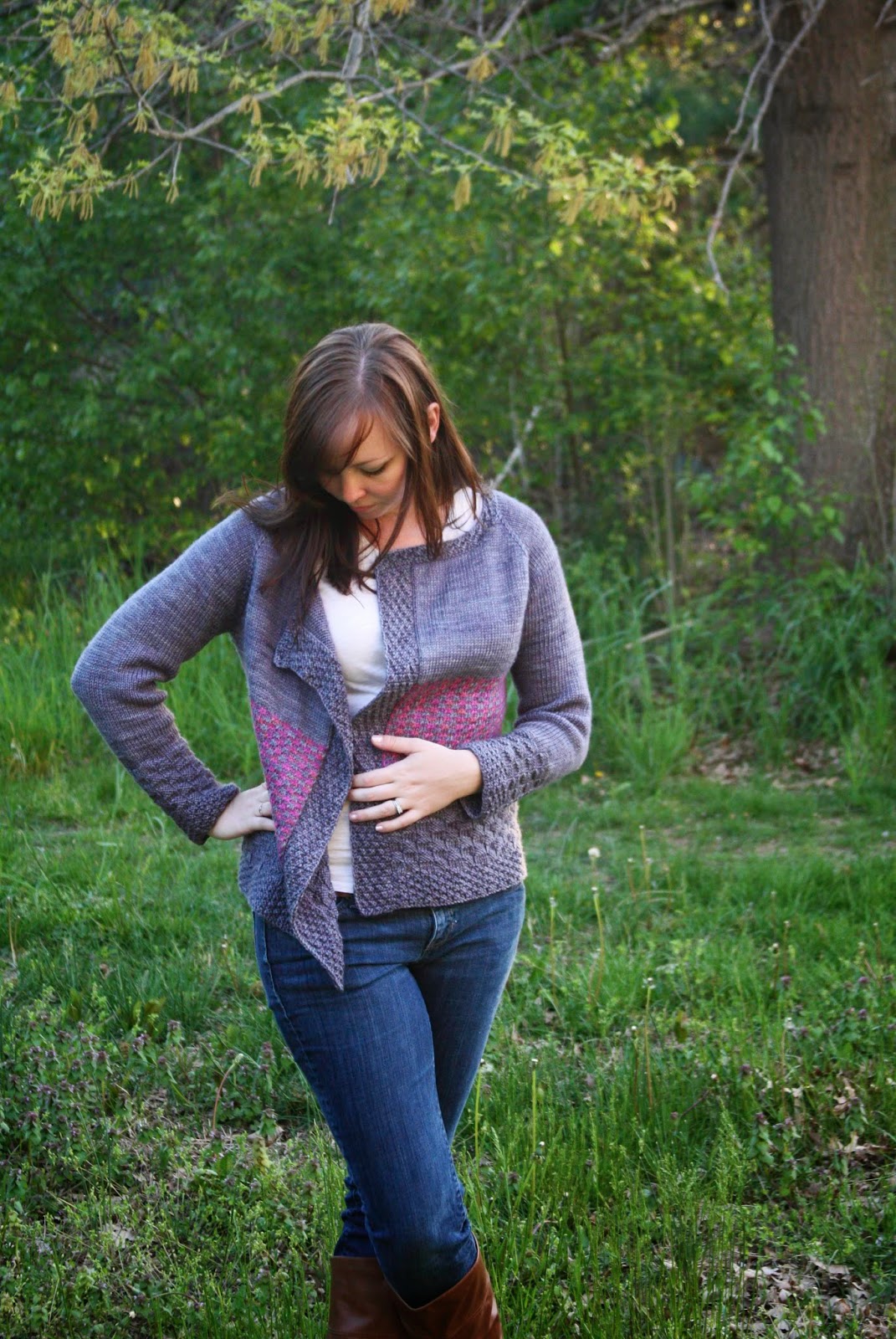 The colorwork section is an excellent opportunity to use up that skein of highly variegated yarn that you don’t know what to do with. Just make sure it contrasts well with your main color! 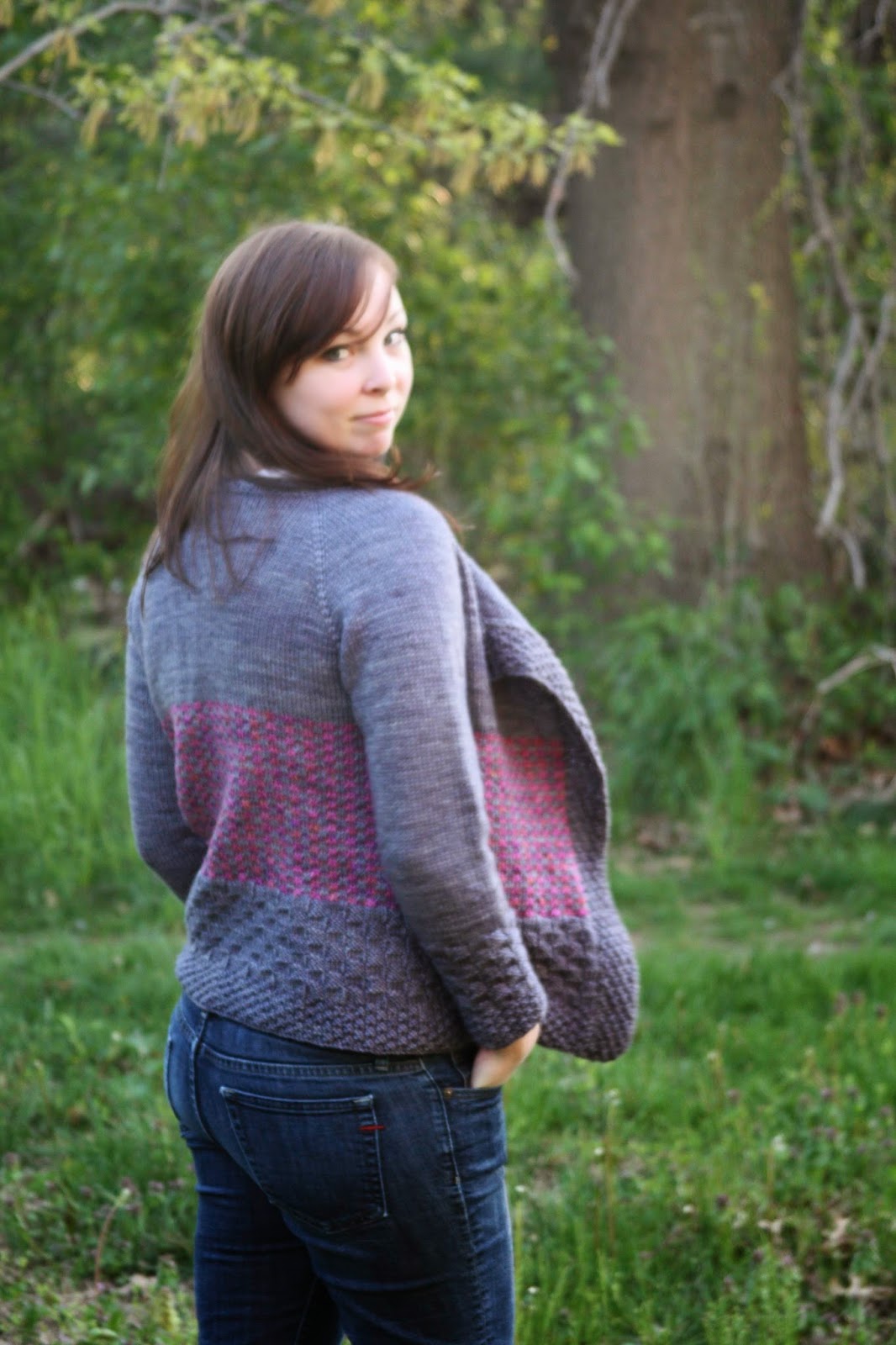 Posted by Emily Ringelman at 10:02 AM No comments: