I made some pretty mittens.

And put them on Etsy. 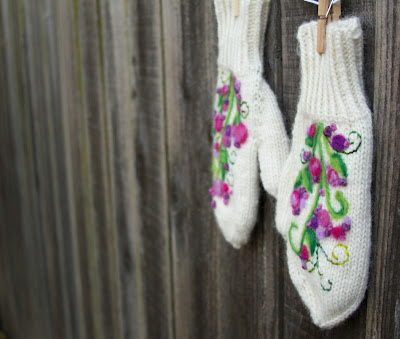 Super simple mittens- I think I cast on 36, then increased to 40 after the ribbing, and did a usual thumb gusset, and grafted the tops. I used Full O' Sheep by Debbie Stroller- that 100% wool yarn that showed up in Michael's awhile ago, but apparently is there no more, which doesn't surprise me. When it first showed up in Michael's I got excited and bought a bunch of it before realizing that I hate knitting with it. It's terribly splitty, and it's too loosely spun, and I just don't like it. It was perfect for these mittens, though, because the yarn is a single ply and very conducive to being needle felted, which is precisely what I did, all over the fronts. For variety I also made some french knot flowers and did some back stitch vines with leftover sock yarn. 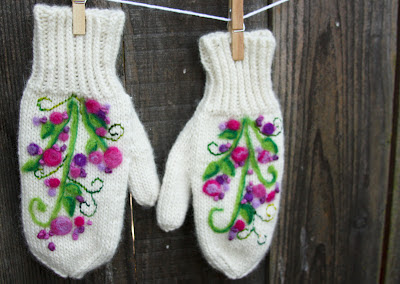 I kind of don't want to give them up, but that's what I think about everything I sew or knit. Closet space is a real motivator for me, and right now I have none. Maybe I'll make myself a pair when it actually gets cold here, right around January. No need until then.

Posted by Emily Ringelman at 2:21 PM No comments: