These are my first socks of 2012. They're the "Sailor's Delight" pattern from 2 at a Time Socks. A while ago, on Ravelry, I traded a skein of sock yarn that I'd dyed for this skein of yarn. It's J Knits superwash sock yarn in the colorway "Boston". At first, I really didn't like this yarn because it was super splitty. I cast on for the first sock (yes, I knit them one at a time, even though I got the pattern from a 2-at-a-time book) on a slightly drunken Saturday night. The next day, when I resumed said sock, I found it to be totally fine, and not splitty at all. Lesson: we don't knit with fine gauge yarns while drinking. This is a lesson that I will surely learn again. 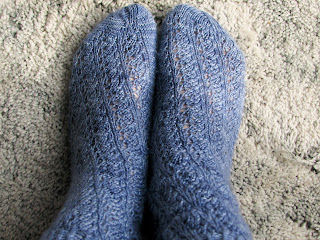 I really love these socks. I wasn't sold on the color when I got it, but it turns out that they fit right in with my mostly nautical wardrobe. The fact that they're called "Sailor's Delight" may or may not be the reason I chose this pattern. Yes, I have a nautical problem. Don't judge. 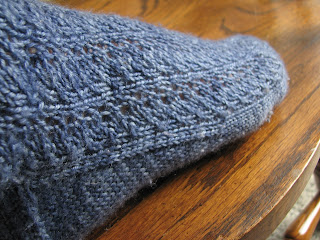 This is only the second pair of socks I've made. I hated knitting the first pair. It took the better part of 2011 for me to finish. So no, it doesn't make sense that I decided to knit more socks. But these socks flew by. I knit most of the second one in a Saturday. And I have worn the crap out of them since finishing. Like, so much that they may need to be darned soonish. They just go with so many outfits! I loves them.﻿
﻿ 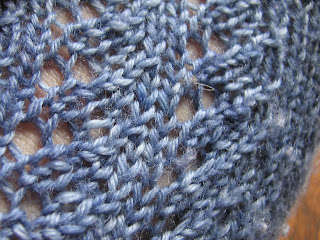 Posted by Emily Ringelman at 3:26 PM