And the winner is...

Marilyn! I've sent you a message. Thanks to everyone who entered! On a funny note, there were six comments, so I asked my husband to pick a number, one through six, for the winner. He said, "Seven." Sigh.

Also, I made another Faoilean ski hat. I don't think the white one photographed very well, so I picked out some blue yarn and did it again. 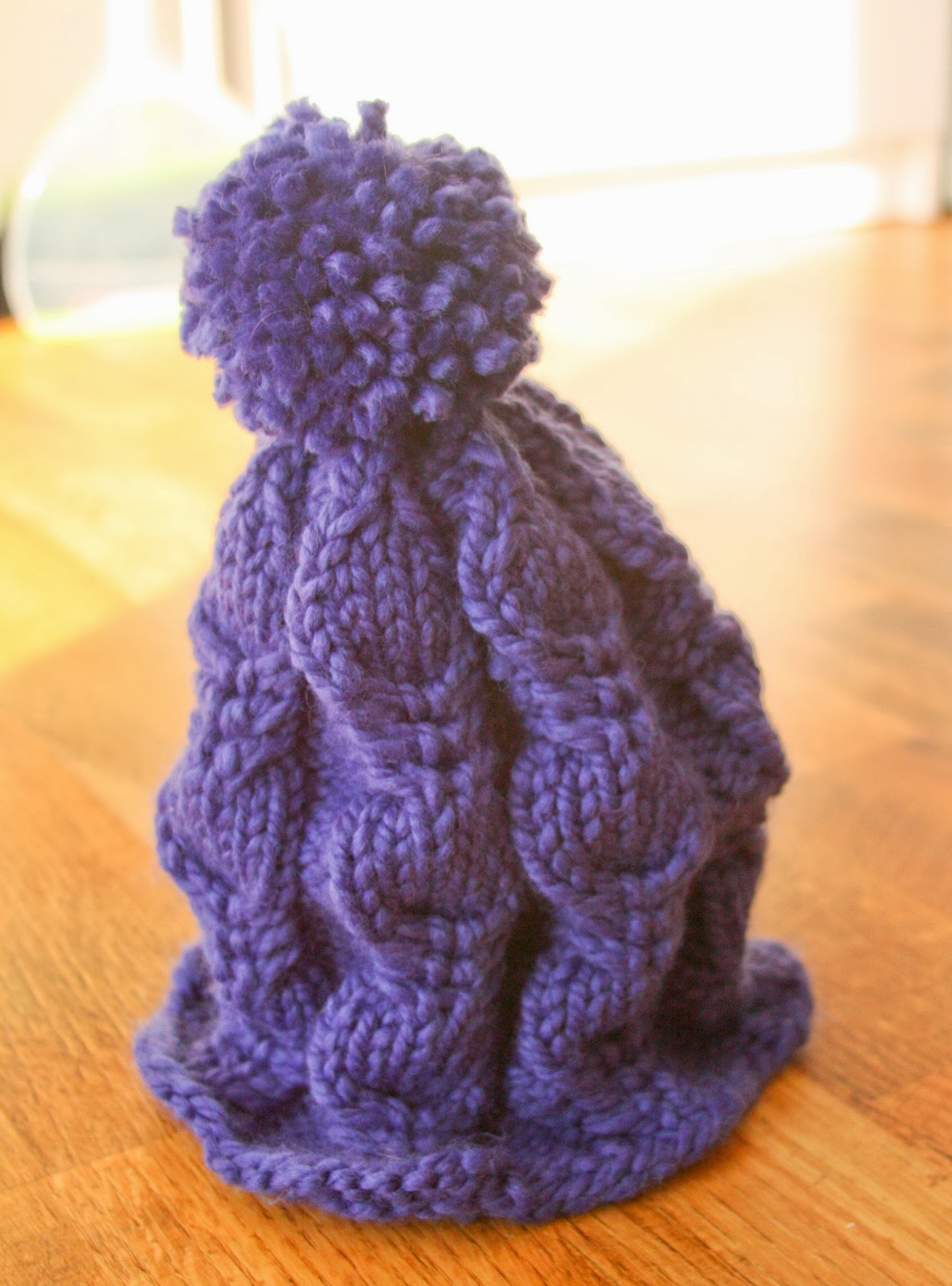 This thing is beast. The yarn was arguably too thick for the pattern, and it was kind of a struggle. But that thing is warm! It's so dense that it stands up on its own. Oh well, at least it's a nice color.
Posted by Emily Ringelman at 12:50 PM No comments:

Before Christmas, when I was supposed to be doing a million other things, I got obsessed with a specific stitch pattern from one of my stitch dictionaries, and well, I wrote an ebook about it. The stitch pattern is called "triple gull stitch", so naturally, I named the ebook "A Flock of Seagulls." Seemed to make sense. 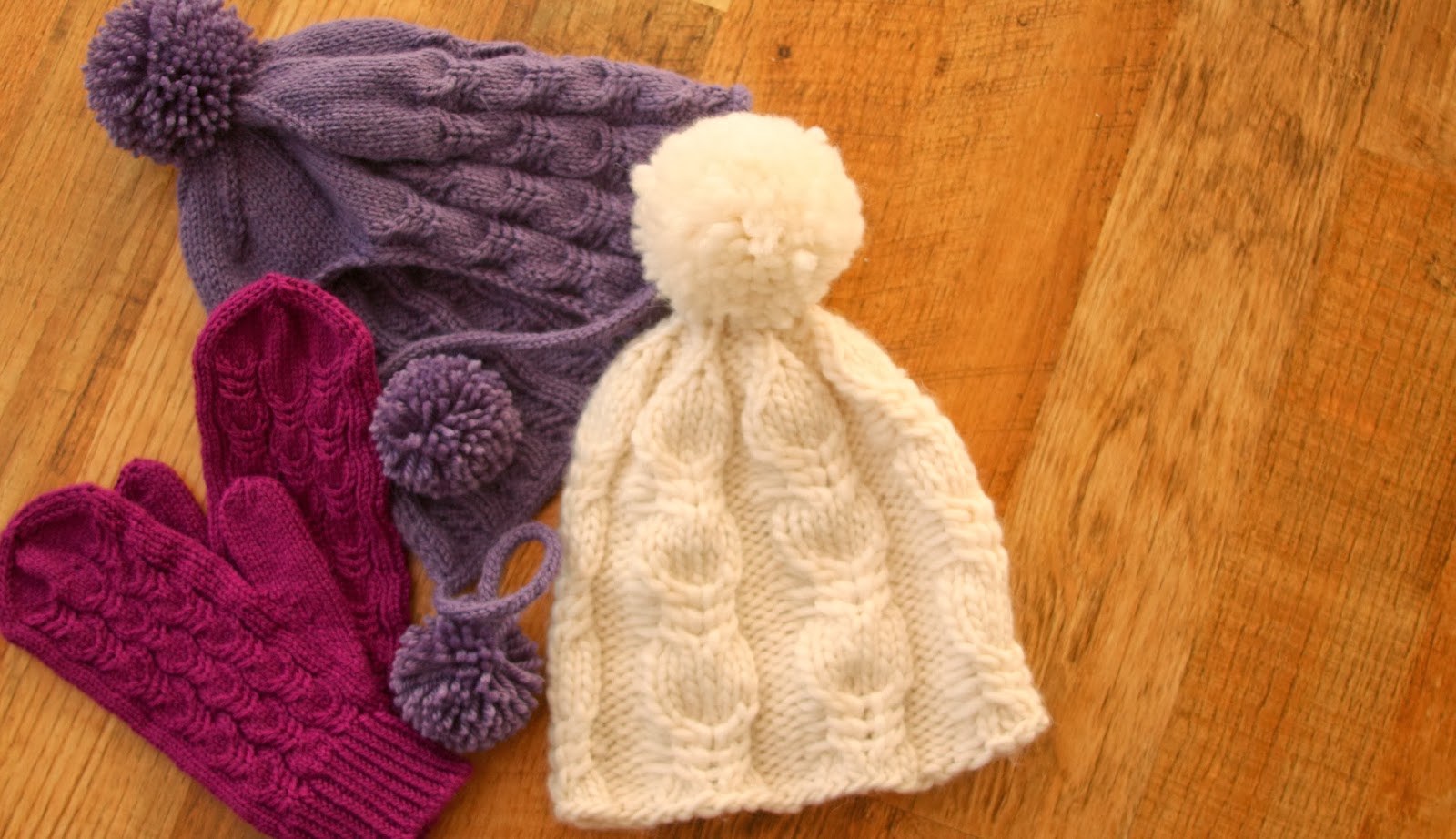 There are three patterns: a ski hat, a bonnet, and a pair of mittens. I named them each the word "seagull" in another language.

I was totally proud of myself because I designed these three things from yarn I had in my stash. That's a goal of this year: use up some of the stash yarn, because moving it across the country was a real pain.

Want to win a copy of the ebook? Leave a comment on this post and I'll pick a winner on Friday, January 24th.

Now to the patterns.
Details!

Get the entire 3 pattern ebook on Ravelry!
$10, no account required. 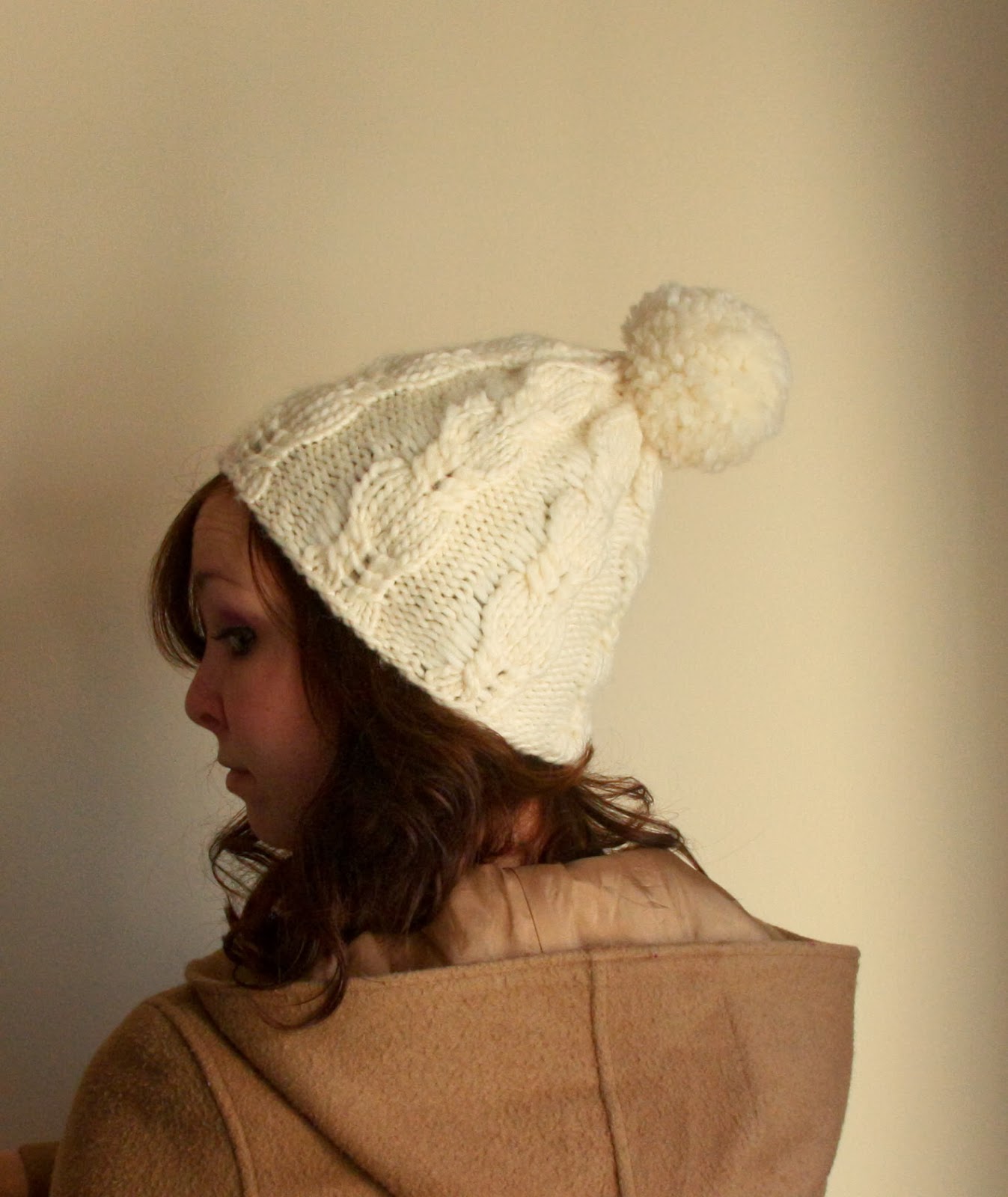 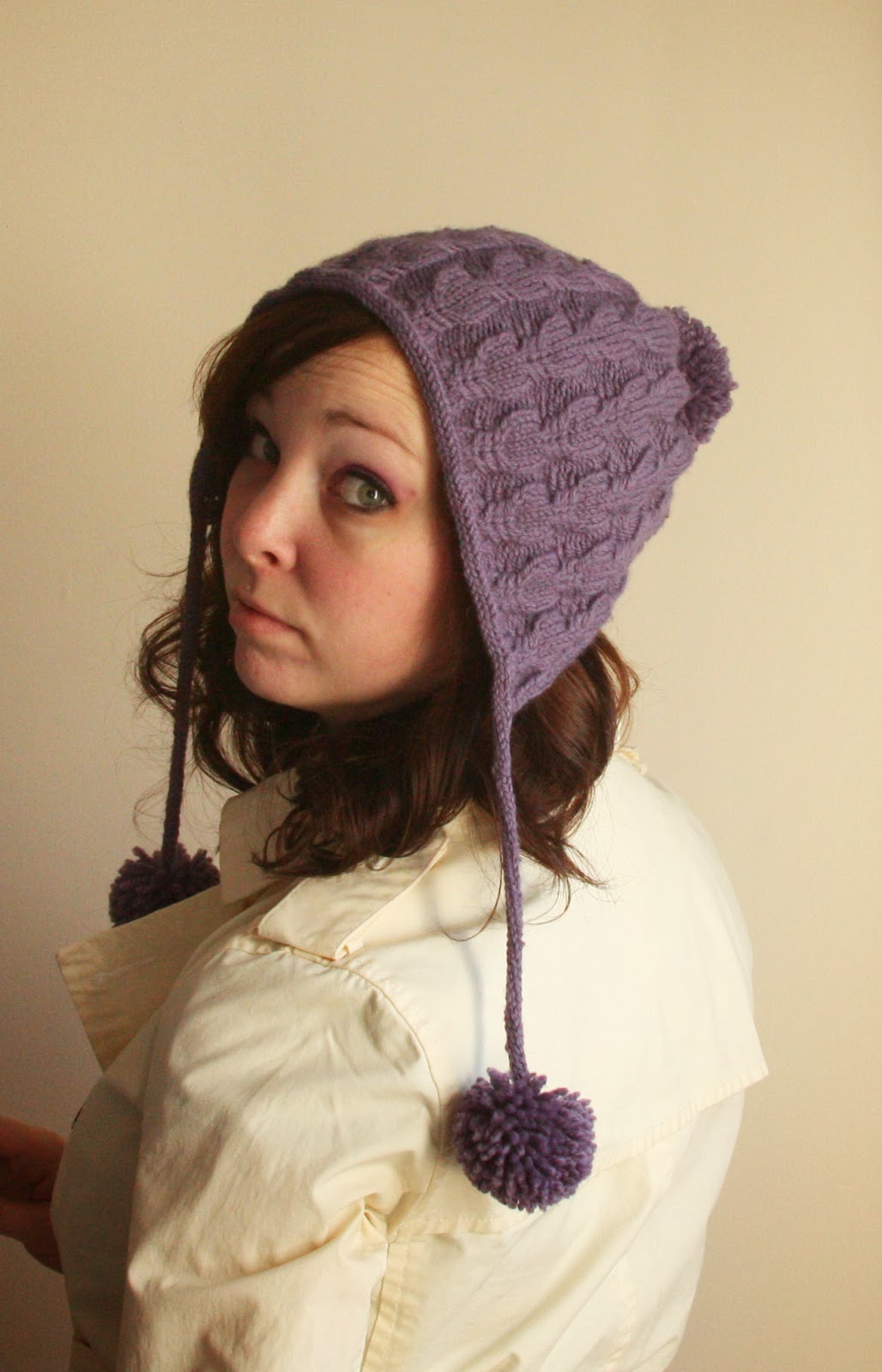 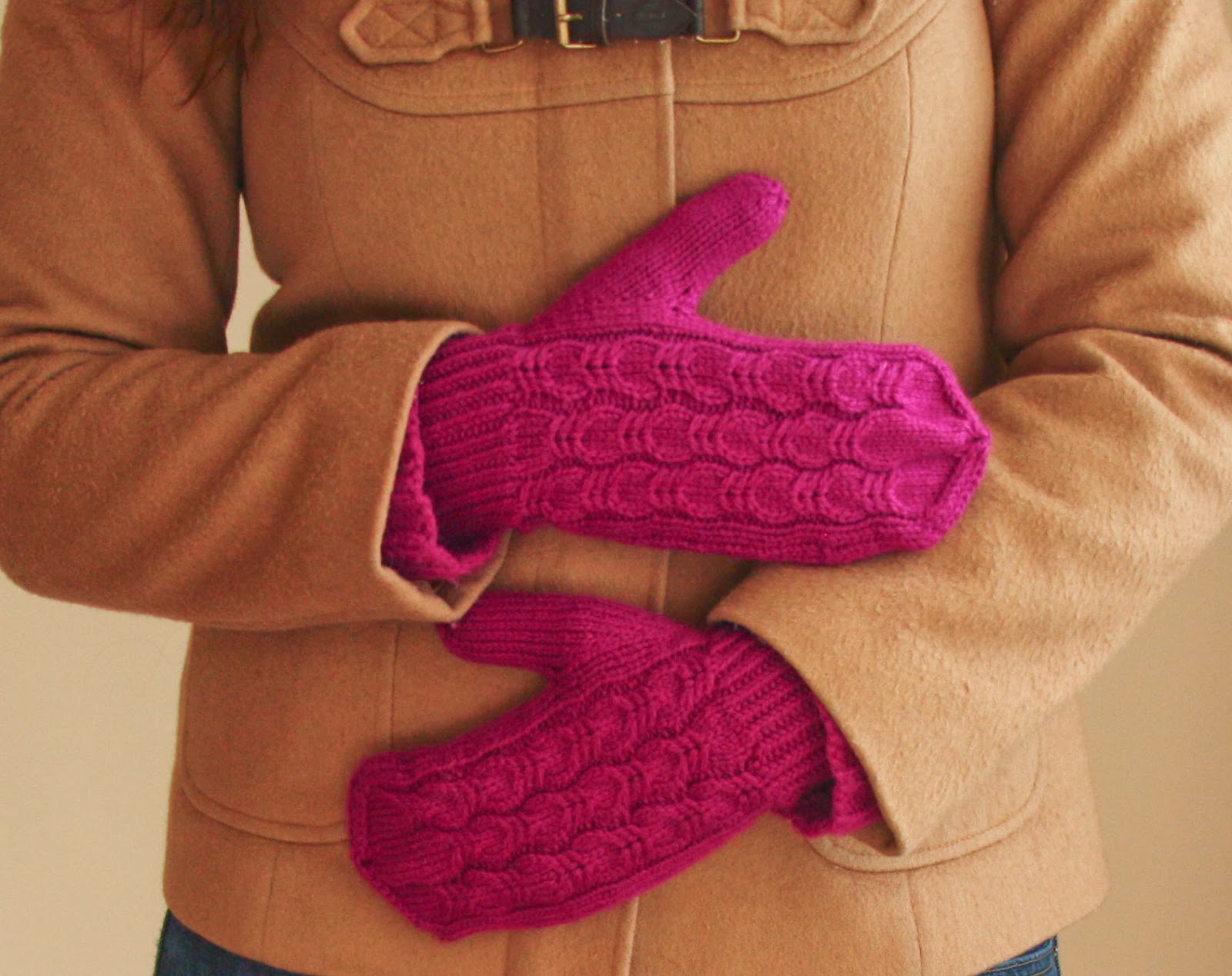 Posted by Emily Ringelman at 7:32 AM 6 comments:

Not quite what I had in mind

You may recall that before Christmas, I was mildly obsessed with this jacket. I found a pattern for a moto jacket (Kwik Sew 3764), ordered some fabric (cream colored wool-blend boucle) online, and spent kind of a long time making... this. 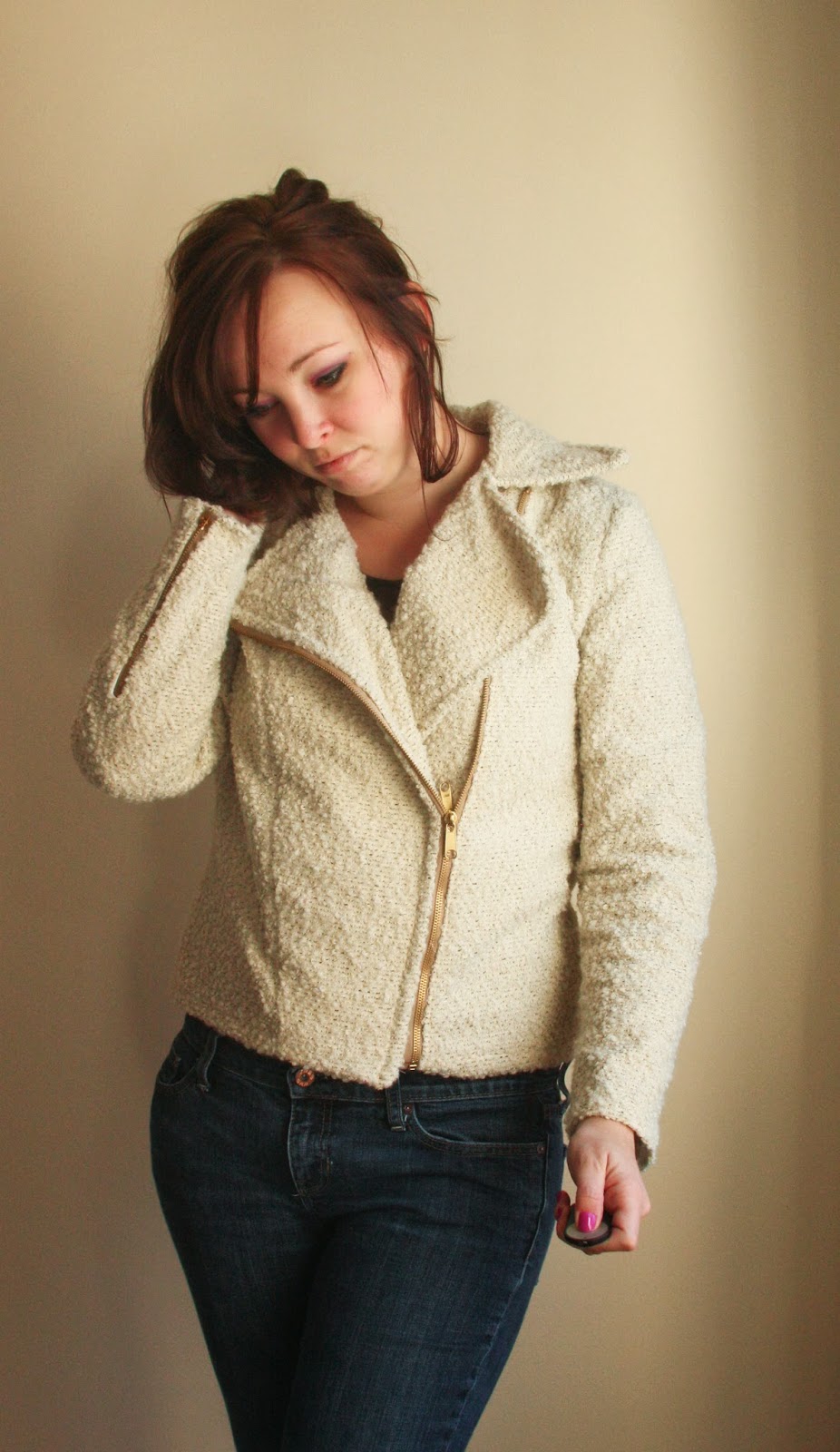 (Yes, I also see the remote in my hand. Still trying to figure out the best way to take selfies with my new tripod.)

Which is not at all like the one I had in my head. A large part (or possibly the only part) of the problem is that I underlined the boucle with a fabric that is way, way too hefty to ever be underlining. The boucle I ordered online ended up being both more cream than white and more sheer than anticipated. Boo. My mom suggested underlining in silk organza, but I thought that would be too thin, so I took myself to Joann's and picked out some white cotton that may or may not be lightweight denim. (Is is. I made a pair of shorts out of the rest yesterday.) Too thick. I broke a needle sewing across a seam because the seam was like 3/4 of an inch thick. The worst part is that I knew while I was cutting it out that the fabric wasn't going to result in a jacket like the one I wanted. But I persevered. Why? I don't know. I suspect something is wrong with me. 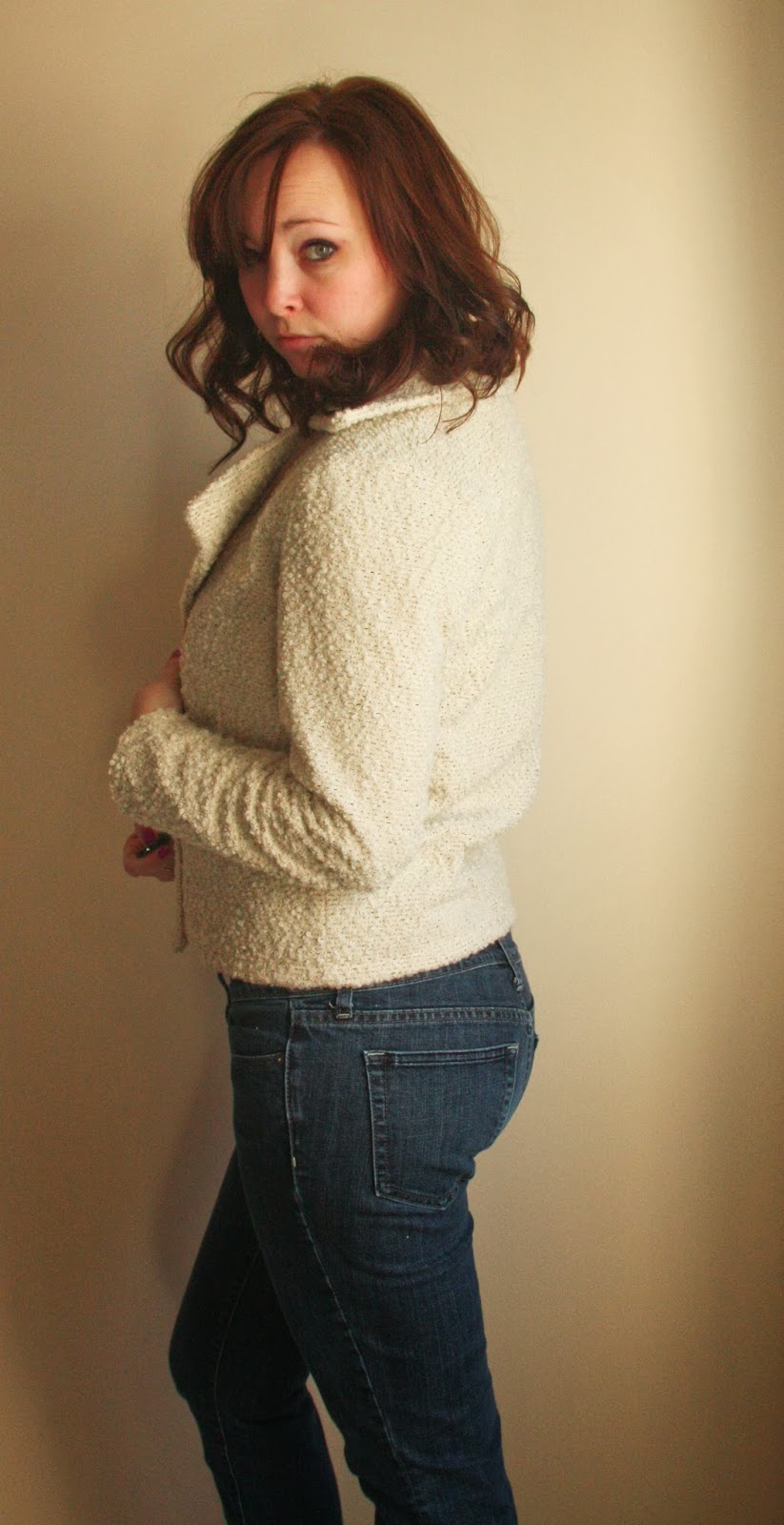 At first, I was hand-basting the fashion fabric to the underlining, because that's what Gertie says to do, and I trust her. But then I was like, why can't I machine baste this? It would take approximately 435 less hours and my hand wouldn't hurt so much. So I did that instead.

I put the sleeve zippers and those little pieces of fabric that go behind the zipper- what are those called? Well, whatever they are, I put those things in by hand. There was no way my machine was going to make that look pretty. I also catch-stitched the seam allowance to the underlining, but only for the center back seam, because while it looked nice, it took forever, and sort of screamed "crazy pants!" So I stopped. 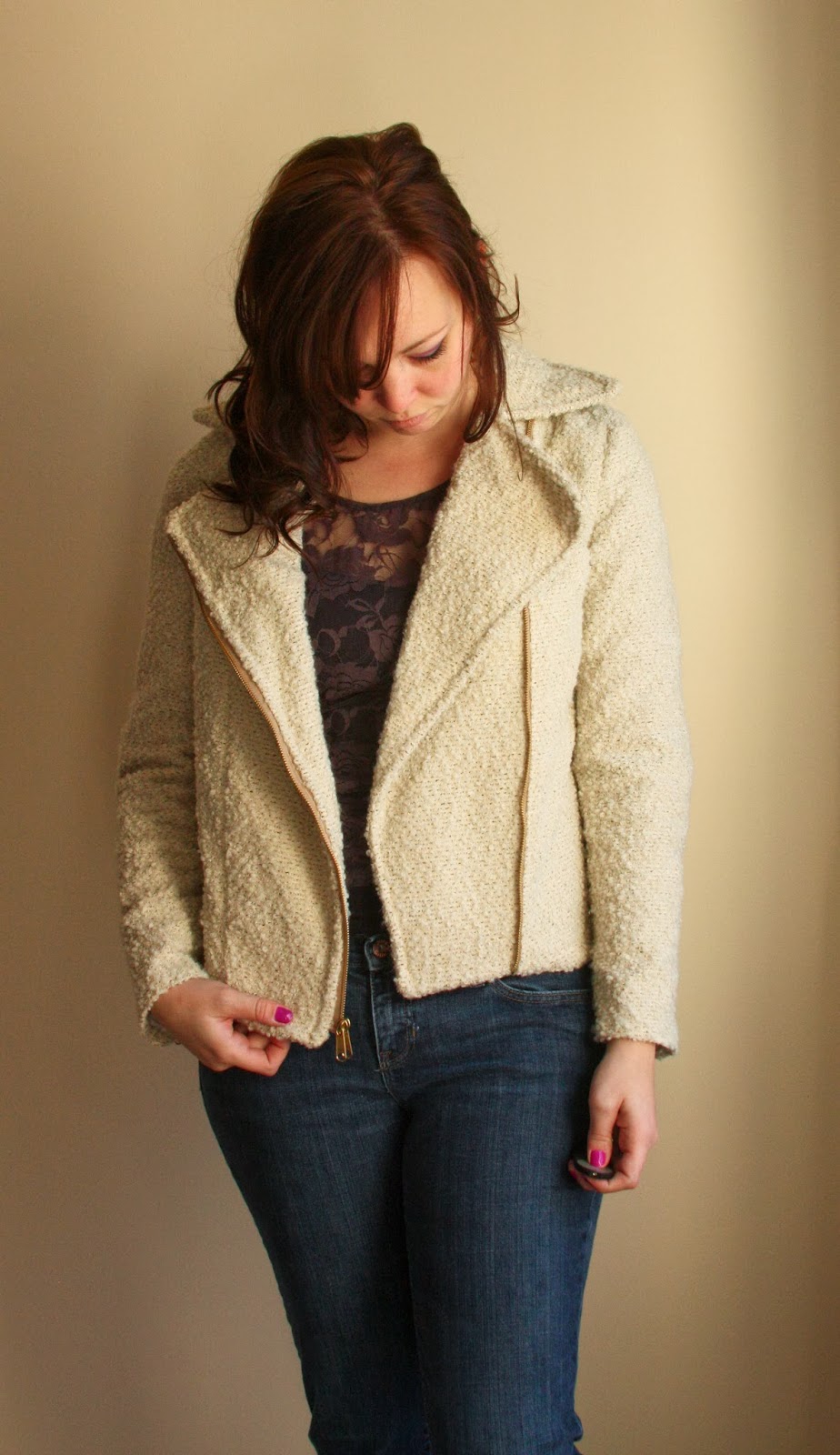 At first, hate, but now, I'm ok with it. It just has a different purpose than originally intended. Instead of the cardigan-type thing I was going for, it's definitely an outside jacket. I've worn it a few times, and I like it. I don't love it, which sucks, because a) the pattern and fabric were not cheap, b) I put those zippers in BY HAND, and c) it kind of took forever. Oh well. Live and learn, yes? The lesson here is that if your mom says underline in silk organza, you should most definitely underline in silk organza. Details for sewing nerds:
-I made view B but added the wrist zippers of view A. I also wish I'd added the pockets, especially now that it's an outside jacket.
-I can't remember making any modifications. This doesn't mean I didn't make any, I just don't remember. I think I'd do a swayback alteration next time.
-I got the fabric from FabricMart.com, and it was called this: Ivory/White/Gray Two Tone Acrylic/Wool/Poly Boucle
-I think that is all.

Posted by Emily Ringelman at 8:35 AM No comments:

Hey, remember these mittens? And these socks? Well, I finished them both. 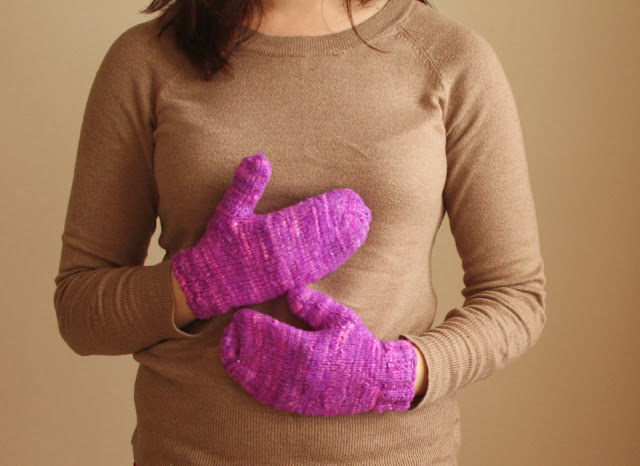 I do not love the mittens. First... the cuffs are much too short, and the silk has no memory, so they aren't snug on my wrists the way mittens should be. Second, the silk has very quickly become ragged looking (although in the mittens defense, I did have them stuffed in my purse all Christmas vacation), and third, they are not that warm. It's possibly (by "possible", I mean, "this is definitely what happened") that I made the yarn too thin overall and REALLY too thin in some places, and thin mittens are not warm mittens. They are lightweight, though. They weigh like 1 ounce, if that.But really, the silk was prettier in hankie form, and I almost wish I would have left it that way, and just admired it when I was in my craft room. Live and learn. I expect I will not attempt silk hankie mittens again. 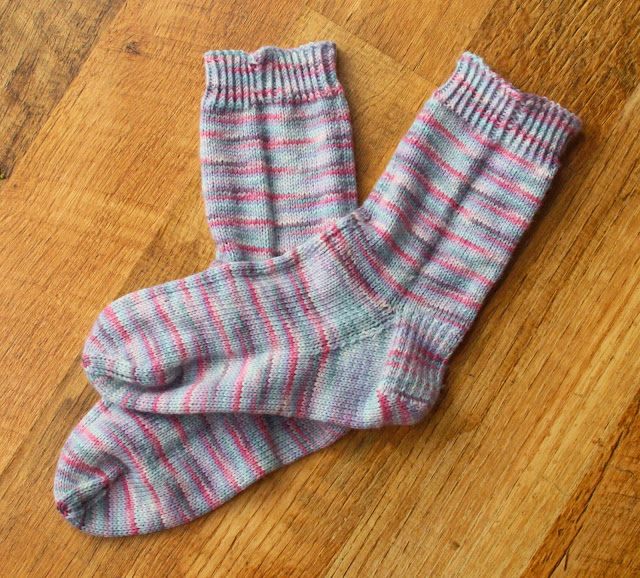 (Wow, please ignore my truly terrible join at the top. Hmm, something to work on, I guess.)

The socks. They are the goofiest socks I've made thus far, but I love them. I got the yarn during Knit Picks' Cyber Monday sale, and it was like $5. I cannot pass up $5 sock yarn, even if it has the potential to be goofy. The colors, though, oh the colors. It's like every pastel ice cream color exploded on the socks. Any pattern at all would have been too much for this yarn. I just made plain vanilla (ironic, because I have been calling them "Ice Cream Socks") socks, cuff down, 64 stitches and a gusset heel. Easy. I had one and a half socks done before the new year, but since I finished them in 2014, they totally count towards my goal of 6 pairs this year. Check one off the list.
Posted by Emily Ringelman at 7:56 AM No comments:

First pattern of 2014! I was hoping to get this out before Christmas, but looking back, that was a crazy plan. Not sure what I was thinking. But oh well, here we are. 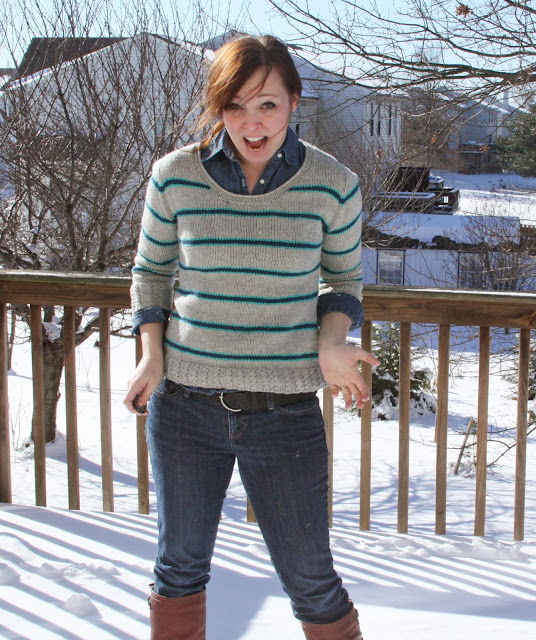 It was cold. Snow was blowing at me. The photo shoot was quick.

Electric Oasis (so named because for some reason, the song "She's Electric" by Oasis was in my head literally the entire time I was knitting this) is a top-down, contiguous-sleeved, seamless, striped pullover worked in the delightfully squishy Spud and Chloe Sweater. I've come to realize lately (now that we live in a cold place and I actually do have to wear sweaters quite often) that I prefer simple pullovers. Hence, a lovely classic pullover with fun stripes and baby cable ribbing instead of plain old normal ribbing. I love sweaters like this. Sweater + skinny jeans + boots + brushed hair and mascara and I'm totally put together. Easy! 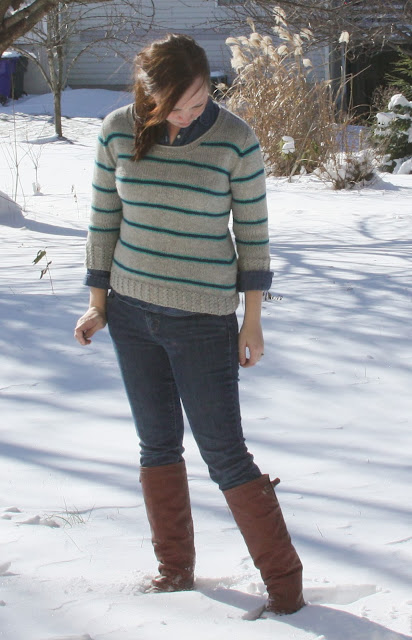 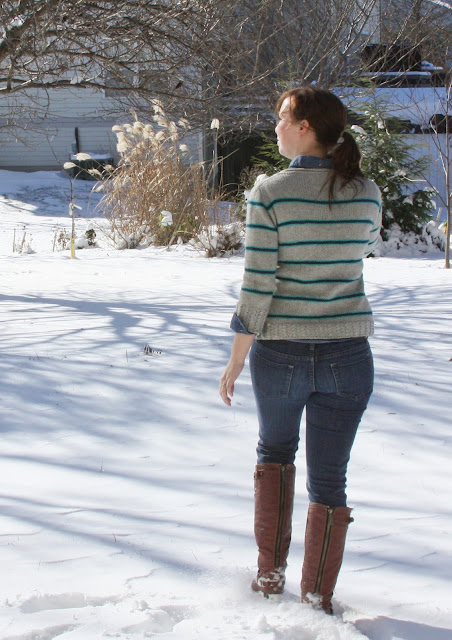